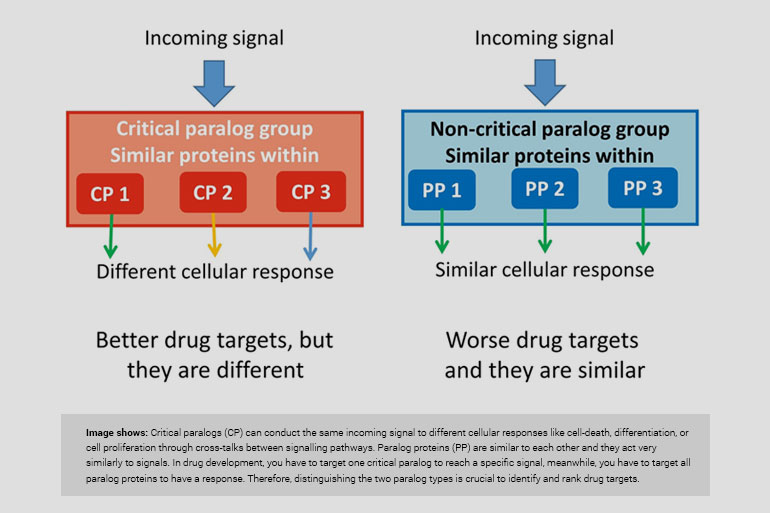 A network analysis of proteins that are most important in responding to environmental signals highlights potential targets for drugs and provides better information on the genetic basis of diseases.

Throughout evolutionary history, there have been genetic elements that have duplicated - giving rise to genes with different functions. These are called ‘paralogs’. They are able to form and evolve new functions, which have similar functions in relation to cellular signalling. This also means that there are many duplicated genes within the genome that might be redundant or less prominent when it comes to key cellular signalling pathways.

Scientists in the UK and Hungary, led by Earlham Institute (EI), have discovered which proteins are critical in a range of biological functions, including cellular communication.

The team found 75 so-called critical paralog groups (CPGs) containing proteins with close evolutionary relationship to each other. One or two members these groups can be critically important for a specific function, and also their changes, called mutations, can cause cancer or other inherited diseases.

The systematic discovery of these proteins identifies their indispensable role in human cellular signalling pathways, as well as how to potentially guide drug targets and find biomarkers for disease diagnosis in the future.

Lead author Tamas Korcsmaros, Fellow at EI and the Institute of Food Research, said: “Our cells must be able to detect and respond to many different pieces of genetic information coming from both internal and external sources. However, not all proteins in the cell are equally important.

In the post-genomic era, we already know there are key groups of proteins responsible for detecting, transmitting and communicating through cross-talk between different cellular pathways. Previously, it was challenging to identify which proteins, in which group, are more critical for the overall function of the cell; and those that are more relevant in causing diseases such as cancer, diabetes or neurodegenerative disorders.

The computational biology workflow we developed and confirmed with known examples provides an easily applicable method for disease-specific analysis. The concept will also help us to understand fundamental biological questions in comparative genomics on how duplication in the course of evolution led to more complex organs (such as the brain) and organisms.”

First author Dezső Módos, Research Associate at the University of Cambridge, added: “Our study shows the importance of similar proteins (paralogs) in signalling networks. Taking into account the paralog specificity in drug discovery because different paralog-specific signal routes could lead to totally different results like cell death or proliferation."

The paper titled: "Identification of critical paralog groups with indispensable roles in the regulation of signalling flow" is published in Scientific Reports. DOI:10.1038/srep38588.

image shows: Critical paralogs (CP) can conduct the same incoming signal to different cellular responses like , differentiation, or cell proliferation through cross-talks between signalling pathways. Paralog proteins (PP) are similar to each other and they act very similarly to signals. In drug development, you have to target one critical paralog to reach a specific signal, meanwhile, you have to target all paralog proteins to have a response. Therefore, distinguishing the two paralog types is crucial to identify and rank drug targets.

The mission of the Institute of Food Research is to be an international leader in research that addresses the fundamental relationships between food and health, food and the gut and the sustainability of the food chain in order to further the production of safe, healthy foods. It is a company limited by guarantee, with charitable status.

IFR is one of eight institutes that receive strategic funding from the Biotechnology and Biological Sciences Research Council. IFR received a total of £17.9M investment from BBSRC in 2013-14.

The institutes deliver innovative, world class bioscience research and training, leading to wealth and job creation, generating high returns for the UK economy. They have strong links with business, industry and the wider community, and support policy development.

The institutes' research underpins key sectors of the UK economy such as agriculture, bioenergy, biotechnology, food and drink and pharmaceuticals. In addition, the institutes maintain unique research facilities of national importance.