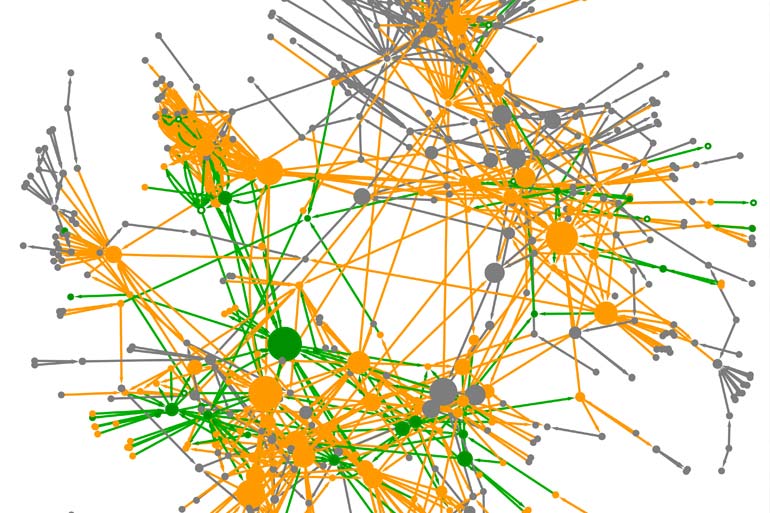 Computational biologists have looked at the complex networks of interacting proteins that drive cancer formation, and found that targeting the neighbours of cancer-causing proteins may be just as effective as focusing on the cancer proteins themselves.

Cancer is caused by an accumulation of genetic changes in a cell, that overcome the normal checks and balances leading to uncontrolled growth. A complex, interacting network of proteins controls all of a cell’s processes, from metabolism to growth and division. The proteins pass signals around the network, integrating regulatory mechanisms to ensure its smooth running. But sometimes, environmental factors cause mutations that change how some of these proteins work, rewiring the network into a cancer cell.

To understand cancer and block its progression, scientists have identified which proteins are changed in different and targeted these with drugs that block their activities, so halting cancer progression.

While this is effective against some cancers, for others, such as ‘solid’ cancers in the bowel and lung, chemotherapy has only moderate success. New targets for novel chemotherapy drugs are urgently needed, and a new approach to finding the best targets in the complex protein networks that control our cells may point the way.

The new approach to finding drug targets relies on looking at the whole network of interacting proteins, rather than concentrating on just those that are mutated to trigger cancers.

“Increasingly, we are seeing cancer as a ‘systems’ disease,” said lead researcher Dr Tamás Korcsmáros from the Earlham Institute and Institute of Food Research. “This calls for a systems level approach, and network analysis techniques, to really understand how normal cells are transformed into cancer cells at the molecular level.”

Working with colleagues in Hungary and University of Cambridge, the team led by Dr Korcsmáros used databases of genes known to be involved in cancer, or that show major differences between healthy and diseased tissues, along with other resources detailing protein interactions in the cell, to create computational models of the protein networks in different types of cancer cells.

What was clear from this was that the cancer-related proteins tended to be very well connected at the centre of these networks, like a spider at the middle of its web. This isn’t surprising, as only the proteins that occupy these key global positions in a network have the ability to rewire it and bring about the different changes that characterise the switch from a healthy to a cancerous cell.

The importance of these neighbour proteins was also seen in other networks constructed for breast cancer, hepatocellular carcinoma and non-small cell lung cancer, other ‘solid’ cancers where new drugs are needed to tackle high mortality rates. The research is published by Nature and the Systems Biology Institute in the journal Systems Biology and Applications.

“Our findings suggest that new drugs that target these first neighbour proteins could disrupt the cancer-specific networks, making them extremely useful for novel chemotherapies,” said Dr Korcsmáros. “Remarkably, our survey of drugs targeted to these proteins shows there are over 200 drugs already on the market that act against the first neighbour proteins we have identified, but that haven’t been used for cancer treatments.”

Because some of these neighbour proteins are as central and as global as the cancer-related proteins themselves, and link to so many other processes in the cell, there’s a strong likelihood that drugs targeting them may have strong side-effects. This could be overcome by targeting proteins that have a specific, directed influence on the first neighbour proteins, identified by analysing the interaction networks.

Dr Tamás Korcsmáros is a research fellow at the Institute of Food Research and Earlham Institute, two partners on the Norwich Research Park that receive strategic funding from the Biotechnology and Biological Sciences Research Council. This study was also funded by the Hungarian Science Foundation, the Hungarian National Developmental Agency, the Wellcome Trust, and the European Research Council.

"Neighbours of cancer-related proteins have key inﬂuence on pathogenesis and could increase the drug target space for anticancer therapies" is published in Systems Biology and Applications.1

The mission of the Institute of Food Research is to be an international leader in research that addresses the fundamental relationships between food and health, food and the gut and the sustainability of the food chain in order to further the production of safe, healthy foods. It is a company limited by guarantee, with charitable status.

IFR is one of eight institutes that receive strategic funding from the Biotechnology and Biological Sciences Research Council. IFR received a total of £17.9M investment from BBSRC in 2013-14.

The institutes deliver innovative, world class bioscience research and training, leading to wealth and job creation, generating high returns for the UK economy. They have strong links with business, industry and the wider community, and support policy development.

The institutes' research underpins key sectors of the UK economy such as agriculture, bioenergy, biotechnology, food and drink and pharmaceuticals. In addition, the institutes maintain unique research facilities of national importance.