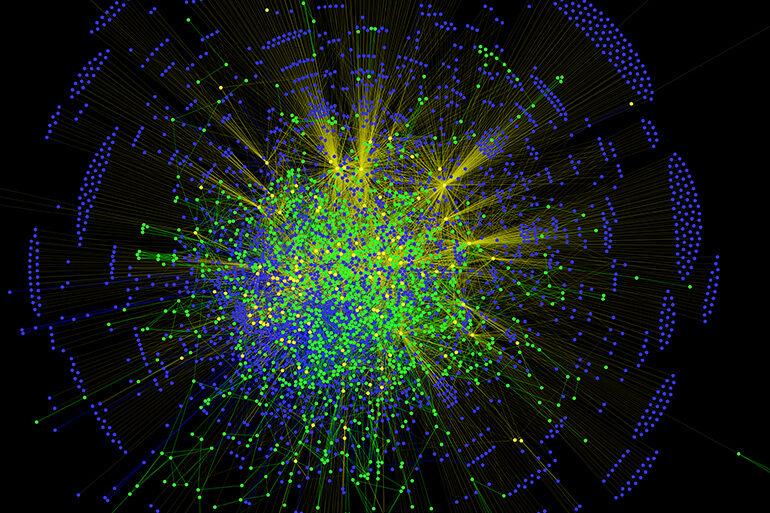 A new resource created by scientists at the Norwich Research Park is helping to uncover what makes certain strains of bacteria more dangerous than others.

There are many different types of Salmonella bacteria, most of which have adapted to live in the guts of different animals, including humans, other mammals and birds. Some of these strains have further evolved extra abilities to evade their hosts’ immune defences and escape the gut, causing invasive disease. These types of Salmonella are of most concern as they cause the most severe disease, including typhoid.

To understand what makes certain strains so invasive, researchers have been looking at the genetic differences between these and less invasive strains. However, simply identifying which genes are present in each type of Salmonella isn’t enough, we need to know how they deploy these resources, how they are triggered, and the identity of regulated targets.

To address this, Dr Tamás Korcsmáros, a systems biologist from the Quadram Institute (QI) and the Earlham Institute, has led the development of SalmoNet alongside a research group with expertise in Salmonella infection at QI led by Dr Rob Kingsley, and collaborating with the network modelling and food safety scientist, Professor Jozsef Baranyi. SalmoNet uses network biology and bioinformatic techniques to collate molecular interactions within Salmonella, and to link information on how genes and metabolic pathways are regulated in Salmonella, and how proteins interact with each other.

This systems biology approach is crucial to unravelling the complexity of all the interactions that happen in the networks within a cell, and is now being used to answer the question of how bacteria adapt to their environment, and how bacteria associated with disease evolve. This is the first time that this type of approach has been used to investigate Salmonella.

The core of SalmoNet is data derived from ten of the best characterised Salmonella strains, five well-known as gastro-intestinal and five invasive extra-intestinal  strains capable of causing systemic infections. This is helping researchers to identify key differences in how genes and pathways are regulated between these two groups, and how different strains have adapted to particular host species. The advantage of looking at global networks as in SalmoNet is that this can identify not only critical protein interactions and metabolic connections corresponding to various processes, but also master regulators of these processes needed for invasive disease. These may be useful as potential drug targets, and will help in the development of new therapies against systemic Salmonella infections.
SalmoNet has been made available online, the first such resource for the global Salmonella research community – http://salmonet.org. The research was supported by the Biotechnology and Biological Sciences Research Council (BBSRC).

SalmoNet will be widely used as a source of novel predicted interactions for experimental validation, or provide important interaction information to interpret the measurements from experiments performed in labs around the world. The approach is scalable and will be extended beyond the ten core strains, for example to look at novel strains and characterise their unique and common disease characteristics.

The researchers are also interested in using SalmoNet to understand how Salmonella interacts with proteins and signalling molecules in its host organism, especially in humans. Integrating SalmoNet to human signalling networks could uncover connections between the two, and identify new targets for drugs or therapies.

Reference: SalmoNet, an integrated network of ten Salmonella enterica strains reveals common and distinct pathways to host adaptation will be published in npj Systems Biology and Applications at 11:00am London time (BST) on October 18, 2018 doi: 10.1038/s41540-017-0034-z

The Quadram Institute will be at the forefront of a new interface between food science, gut biology and health, developing solutions to worldwide challenges in food-related disease and human health. It will bring together research teams from the Institute of Food Research, the Norfolk and Norwich University Hospitals NHS Foundation Trust (NNUH) and the University of East Anglia, as well as NNUH’s regional gastrointestinal endoscopy unit.