Black-footed ferrets are an endangered member of the weasel family, native to the prairies of North America.

Black-footed ferrets historically occupied a territory reaching from southern Canada, all the way through the USA to Northern Mexico and numbered in the tens of thousands, but currently only live in small territories in the US where reintroduction schemes have been successful. It lived alongside prairie dog populations, its main food source, on grasslands and the Intermountain West. They are nocturnal and spend most of their time in underground burrows, leaving at night to hunt for prairie dogs (or other prey if necessary).

Mainly a solitary animal, their breeding season is in February and August, and the kits are typically born between May and June in burrows. They are born blind and remain in the safer burrow environment until they are 6-8 weeks old, where they will leave the mother’s burrow to make individual neighbouring burrows and begin hunting with the mother. By October, a ferret will have become independent of its mother and move into its own territory. 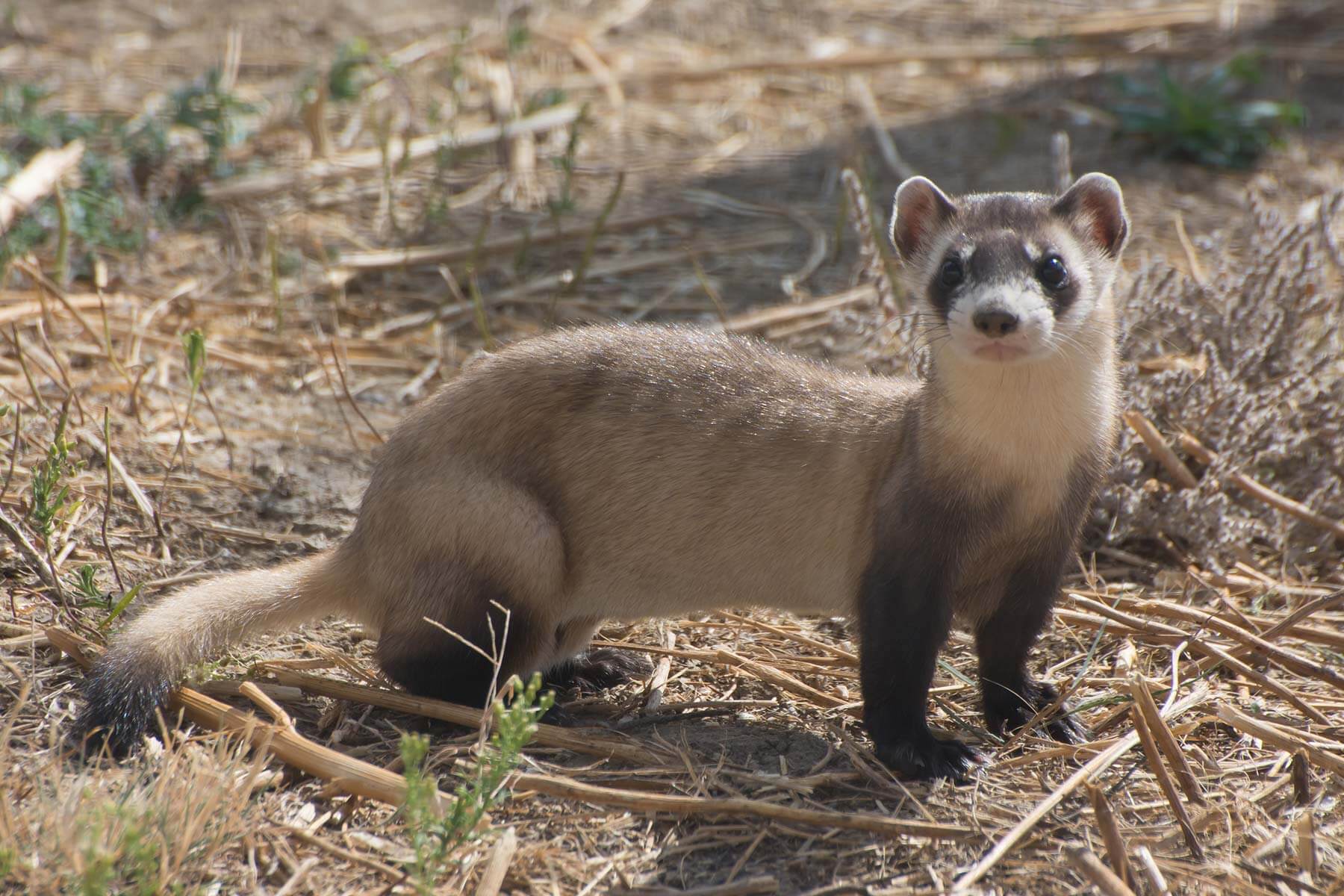 Biodiversity is key to maintaining and sustaining healthy ecosystems. However, habitat loss and degradation as a consequence of direct and indirect human interventions, including climate change, are pressing issues threatening both ecological and species diversity.

Population decline and reduction of gene flow lead to loss of genetic diversity, affecting reproductive fitness and the ability of species to adapt to environmental change, increasing the risk of species collapse and ultimately extinction.

We aim to characterise and quantify current genetic variation and its contribution to the adaptive capacity of this key species.

Black-footed ferrets were considered Extinct in the wild by the late 1980s due to disease (canine distemper and plague), habitat loss and a decline in the population of prairie dogs (their prey) from disease, habitat loss and human extermination efforts. Current populations exist due to human conservation efforts, which involved breeding ferret populations ex situ and reintroducing groups of them in various locations.

There have been attempts to reintroduce ferrets in the USA, Mexico and Canada since 1991, and colonies have been set up in Wyoming, Utah and South Dakota. There is a struggle to establish wild populations as they have to adapt to new pressures from living in the wild, and still face disease and a reliance on prairie dogs.

For this project the Earlham Institute is working in collaboration with a number of other organisations such as The Smithsonian Institution, The US Fish and Wildlife Service, Revive and Restore, The University of Florida, Lincoln Park Zoo and The San Diego Frozen Zoo.

Black-footed ferrets are susceptible to a number of infectious diseases threatening the survival of captive and reintroduced populations. Their Eurasian counterparts (European polecat, Steppe polecat and the domestic ferret) are not susceptible to these diseases.

We have found evidence of mutations in genes involved in immune response which we believe may be responsible for the increased susceptibility to diseases in the black-footed ferret, affecting the proinflammatory response during the initial stages of viral infection. We aim to sequence a number of Black-footed Ferrets and compare their repertoire of immune-related genes to those of other mustelid species in order to identify genes responsible for disease susceptibility.

The black-footed ferret used to be a widespread carnivore of the American prairies but numbers dropped so low it was actually thought extinct until a small population was found in Meeteetse, Wyoming. All Black-footed ferrets alive today descend from eight individuals of the Meeteetse population, making them very inbred. We’re interested in the loss of genetic diversity during near-extinction events, which makes Black-footed ferrets and their associated bottleneck an excellent model.

One of our aims is to sequence museum specimens from extinct populations across North America and compare the amount of genetic diversity lost through the bottleneck. This would also allow us to examine the diversity of immune-related genes we mention above to examine the variation in these genes before and after the bottleneck.

Here you can find more information and data about the black-footed ferret relating to its conservation status. The site features excellent interactive, data-driven maps and downloadable data sets.