The pink pigeon is a species found exclusively in Mauritius which has recovered from near extinction.

The pink pigeon has a white forehead, a neck and body that is pale pink, brown feathered wings and a rusty-brown tail. Its eyes and bill-tip are yellow, with red feet. Males have an average lifespan of 17-18 years, while females’ have a shorter 10-11 year lifespan, the difference in lifespan is due to the metabolic energy that females use from constant egg production.

Pink pigeons form long-term and monogamous relationships with their partner. Breeding peaks between April and June, but they can breed from December to September. They nest in native forests, either in the upland evergreen forests or coastal forests. Both parents build a nest to raise their chicks (a mating pair will have two chicks on average), taking turns to incubate eggs and care for the young. Incubation takes 14-days and a squab (young pigeon) will leave the nest after around a month. The fledgeling pigeons will then stay with their parents for several weeks to learn survival skills before leaving them.

Pigeons feed on fruits, flowers and leaves by foraging on the branches of native (or exotic) trees or on the forest floor. Their pink feathers help by camouflaging them with dead leaf foliage on the floor. Due to the degradation of the island’s natural plants by invasive species, conservation organisations now also have to support pink pigeons with feeding stations. Their predators include crab-eating macaque, small Asian mongoose, rats, and feral cats - all of which were species introduced to the island by human settlers. 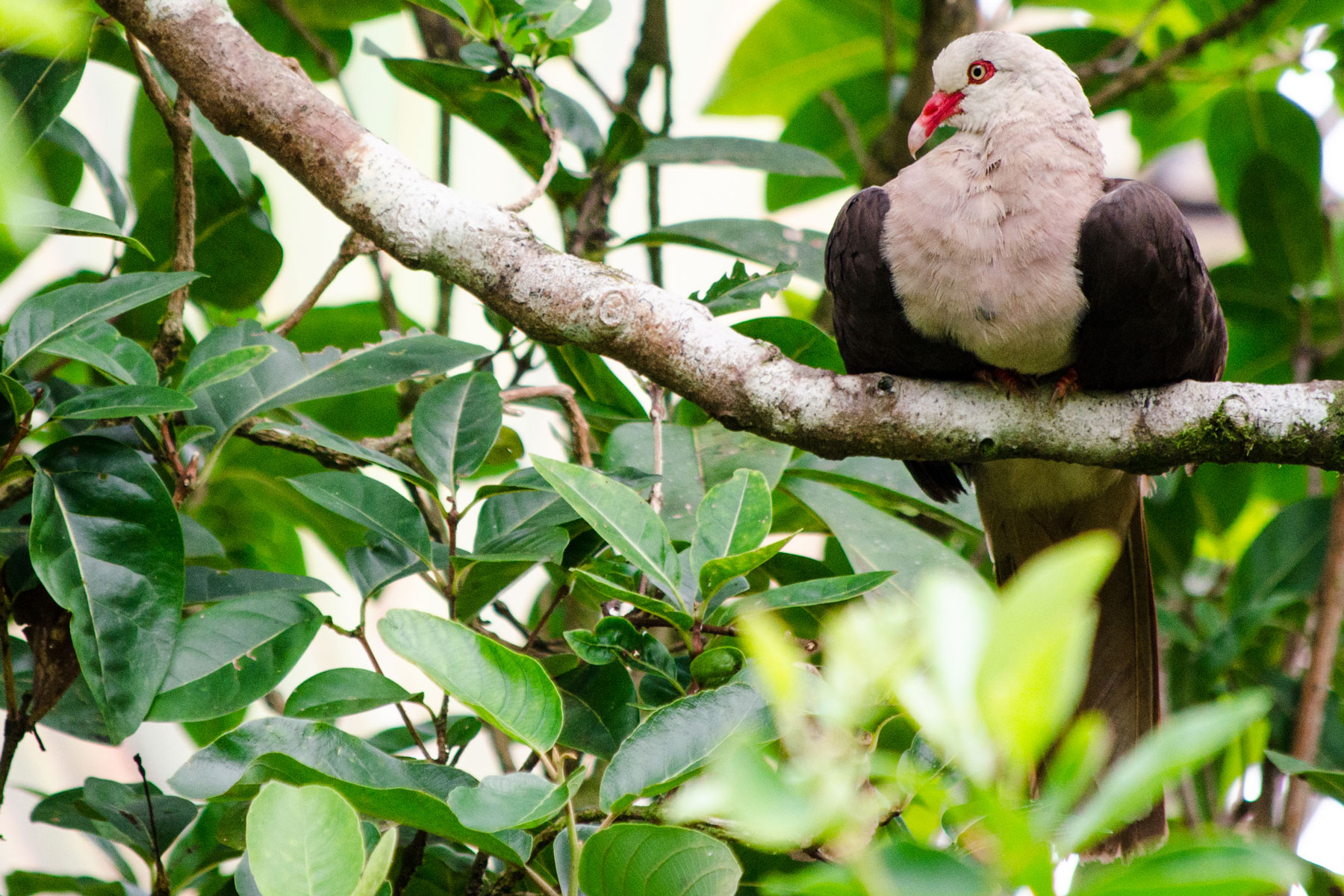 Pink pigeons are one of a vast number of species that have been on the brink of extinction for many years.

That they have been brought back poses the most interest for conservationists, due to the fact that they have a very low genetic diversity as a result of inbreeding.

Thus, as with many species being reintroduced after conservation successes, it’s important to understand how populations will cope against environmental threats such as disease and predation.

Once widely distributed across Mauritius, the population has decreased over time. In the 19th century, it was restricted to the highland forests, and by 1991 there were only ten individuals left. The pink pigeon looked set to be driven to extinction primarily by the cultivation of sugarcane, which became a key part of the island’s economy under French and British rule. This contributed to deforestation and fragmentation of its habitats.

The quality of its remaining habitat was (and still is) compromised by invasive plant species - introduced by humans - that further degraded indigenous plants by preventing the regeneration of native plants. Hunting and introduced animals predating on the pigeons also contributed to the species' decline.

The pink pigeon is still in a weak position for a variety of reasons. Its natural habitats are extremely small (only 2% of Mauritian native forest remains) and concentrated in a few locations, as well as declining in quality due to invasive plants. Predators continue to target eggs and chicks in nests and have occasionally killed adult pigeons, as well as inbreeding depression resulting from its small population reducing the species' genetic diversity.

There is also a shortage of natural food for pink pigeons as native plants struggle to grow; to counteract this, special feeding platforms have been designed to allow pink pigeons to access food (such as whole wheat), restricting other birds from feeding.

Trichomonosis is a pathogen threat to pink pigeons. It infects the oesophagus and causes difficulty in breathing and swallowing. Originally brought to the island by non-native pigeons introduced by settlers, the disease  responsible for chick deaths and is seen as a limiting factor in population growth.

The spread of disease is accelerated by their communal feeding platform with large congregations of pink pigeons, thereby requiring careful management.

The lack of genetic diversity in pink pigeons means that they are even more at risk from such diseases.

EI has been part of efforts to better understand the threat faced by pink pigeons.

Even though they have been lifted off the “critically endangered” category - their low genetic diversity suggests that they are much more threatened than their mere numbers suggest.

The most interesting genome in the world? Vote to save the Pink Pigeon – and help develop a new conservation breeding strategy for many more endangered species.

Help us save the pink pigeon!

Your vote will help us identify genes that enable birds to survive, allowing individuals with disease-resistant genetic profiles to be bred and released on the isle of Mauritius.

Here is a video of the pigeon in Blank Park Zoo.

You can also look at some of the organisations working on its conservation, including Durrell and the MWF.

Read our article to learn more about the conservation of the pink pigeon. 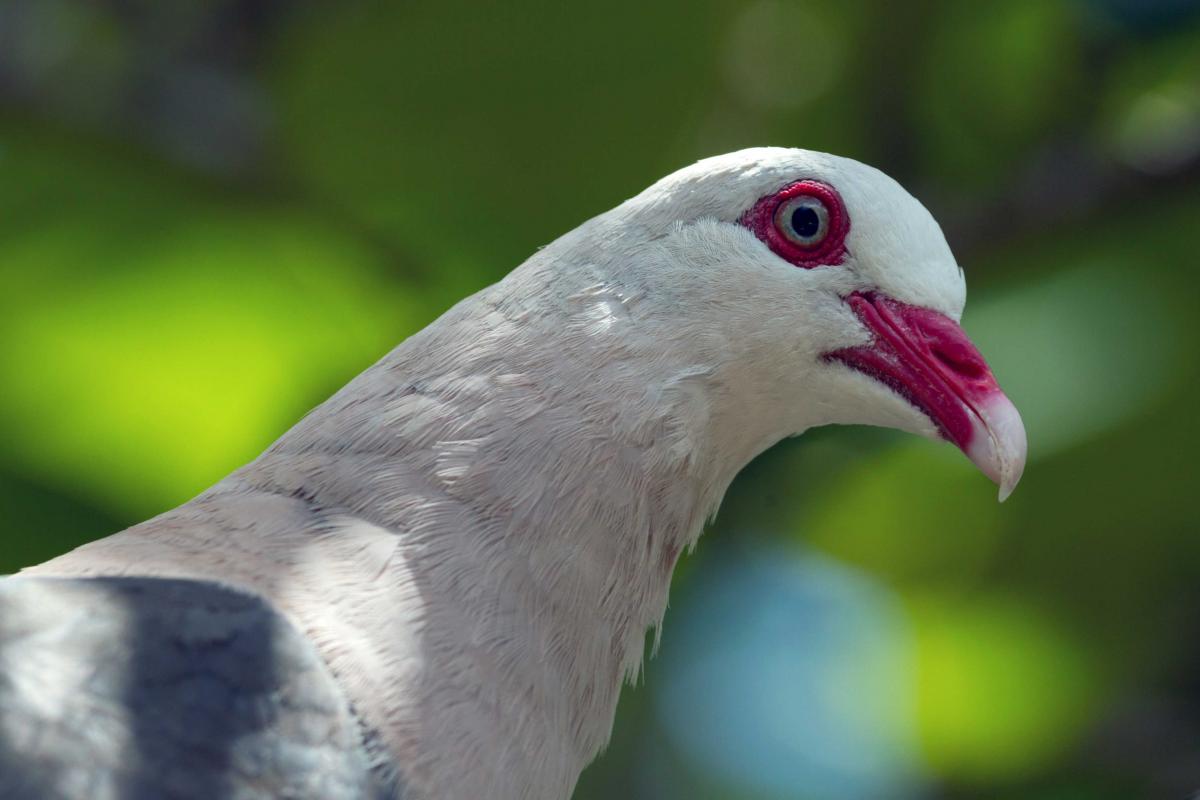