Connecting academia and the wheat industry to resolve the critical challenge of hybrid wheat and shape the future of crop research.

Hybrid vigour is well established in many crops and animals, but the power of this breeding technique to boost yields and climate resilience in wheat is lagging behind. The Hybrid Wheat Initiative changes that, connecting academia and industry to deliver a new programme of R&D for the world’s most cultivated crop - and shape the future of crop research.

In a virtual meeting room last Autumn, at the second annual EI Innovate event, a revolutionary plan was unfolding.

Leaders across academia and industry were discussing together how to bridge a chasm in our knowledge when it comes to improving wheat - a crop that provides more dietary calories than any other, yet languishes in a crucial aspect of its agronomy.

Led by the Earlham Institute’s Dr Liliya Serazetdinova and Professor Anthony Hall, along with Earlham Enterprises Ltd Non-Executive Director John Bloomer, a network was hatched to tackle what has been coined the ‘holy grail’ in wheat breeding: hybrid vigour.

Almost a year down the line, the Hybrid Wheat Initiative is connecting the public and private sectors - including 25 breeding companies and research institutes worldwide - to resolve critical challenges in plant breeding, ensure successful translation of publicly-funded research to industry, and provide a publicly convened “safe space” for companies to collaborate in a mutually beneficial way.

Here, we explain the importance of hybrid wheat, and the Hybrid Wheat Initiative, in shaping the future of crop research.

Through the Hybrid Wheat Initiative, we're shaping the future of crop research.

What is heterosis, or hybrid vigour?

Hybrid vigour is a phenomenon whereby the hybrid offspring is much fitter than either of the two parents were. If we’re talking about crops, ‘fitter’ might mean the offspring is more capable of surviving extreme weather, resisting disease, or perhaps yielding more grain. In a nutshell: more vigorous growth.

Hybrid vigour is well established in a range of major crops, including oilseed rape, maize, barley, rice and rye - and the benefits can be huge. Hybrid maize, for example, regularly provides increases in yield of more than 30%.

Even in wheat, a crop that Professor Hall says has been “undervalued and underfunded for many years”, the yield gain over traditionally inbred varieties is around 10-15%. However, success and broad adoption of hybrid wheat remains elusive.

On the quest for more vigorous wheat, hybrids could transform agriculture. 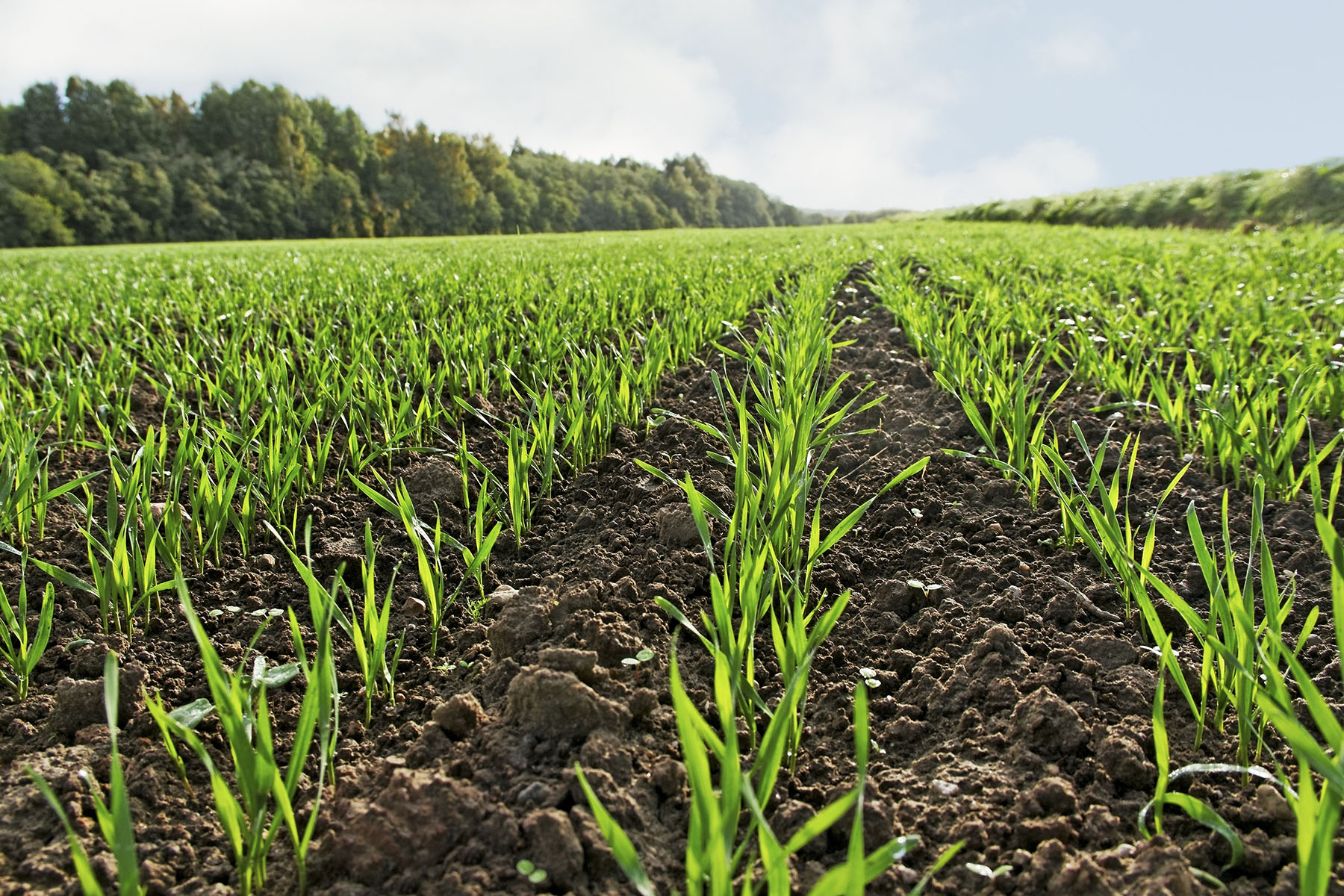 Why is hybrid wheat so important?

Wheat is the most widely-cultivated crop in the UK and provides more global dietary calories than any other.

One of the major benefits of hybrid wheat - other than any potential increase in yield - is better resilience and yield stability in the face of environmental stresses, such as heat and drought, mitigating the more extreme effects of climate change.

While hybrid wheat might mean farmers pay a certain premium each year as new seeds need to be purchased, the improved yield and yield stability should make this a worthwhile investment for them. Furthermore, having an increased proportion of fields sown with hybrid seedstock could prove a valuable insurance policy against climate unpredictability, improving the resilience of our global food supplies.

For the UK business and research landscape, the widespread adoption of hybrid wheat would also enable greater private sector investment into research and development of wheat genetics and trait improvement.

Efficiency gains might also lessen agriculture’s environmental footprint, as the UK continues to set out its path to commit to net zero emissions. Hybrid wheat crops that are more efficient in using nitrogen fertiliser could reduce emissions of gases such as nitrogen oxide. Higher above and below ground biomass might also act as a sponge to mop up atmospheric carbon dioxide.

What is the Hybrid Wheat Initiative?

“A key message from our EI Innovate discussion last autumn was that UK public research currently develops tools and resources primarily through the lens of an inbred approach to wheat breeding, rather than a hybrid approach,” says Earlham Institute’s Head of Business Development and Impact Dr Liliya Serazetdinova.

“While this has led to major breakthroughs in our understanding of wheat, it limits the value of this research for hybrid wheat development, which requires different tools and research outputs.

“A shift of mindset is required in public wheat research to help private sector breeders and support hybrid wheat development.”

This is where the Hybrid Wheat Initiative comes in - a catalyst to enable private sector investment through publicly-funded innovation that will boost both industry and academic research in the long run.

The Hybrid Wheat Initiative involves representatives across small and medium-sized breeding companies and large corporates across the globe (in the UK, France, Germany, and the US), as well as experts in wheat research throughout the UK and globally, representing the Earlham Institute, Rothamsted Research, the National Institute of Agricultural Botany, the University of Nottingham, Scotland’s Rural College, the University of Birmingham, and the International Wheat and Maize Improvement Centre (CIMMYT).

A shift of mindset is required in public wheat research to help private sector breeders and support hybrid wheat development.

Why is hybrid wheat a technical and commercial challenge?

Hybrid wheat has been researched since the 1930s. However, despite several forays between the 1970s and now, few commercially viable hybrid varieties have been developed. Hybrids make up less than 1% of the wheat grown in the UK today.

An obvious commercial challenge is that potential yield gain from hybrid wheat seems to be limited compared to other crops such as hybrid maize (15% for wheat compared to 30% for maize). That limits investment, but the potential is there. Hybrid wheat has shown yield gains of much more than 15% compared to traditionally inbred wheat, with significantly improved yield stability, when under environmental stresses.

The potential is undeniable but economic challenges remain difficult to overcome. Because the sowing rate of wheat is relatively high, there can be a downward pressure on seed prices. Inbred wheat and hybrid wheat are sown at around 160kg/Ha and 100kg/Ha, respectively, compared to hybrid oilseed rape at 5kg/Ha.

Wheat is also a natural in-breeder. With heavy, short-lived pollen, it tends to self-pollinate rather than cross-pollinate - the latter being crucial for producing hybrid seed to sell to farmers. That means production of hybrids is currently difficult and expensive, with breeding and seed production practices requiring something of an overhaul if this is to be at all viable.

When you combine costly seed production with higher seed rates and lower potential yields, the economic challenges for hybrid wheat are clear.

Fundamentally, hybrid wheat is currently suffering from market failure. The yearly royalty currently available to commercial breeders of inbred wheat varieties is around $250 million globally compared to around $30 billion for sales of hybrid maize. This provides relatively little revenue for wheat breeders to solve the significant technological challenges presented by hybrid wheat.

At a time when it’s most needed, both to address food security and economic concerns in the face of climate change, there is a significant risk of the private sector failing to deliver hybrid wheat as a proposition that will be broadly adopted by farmers.

Why is the Hybrid Wheat Initiative so important?

“Individual companies cannot sustain the investment required to resolve some key technical issues that are holding hybrid wheat back from widespread adoption,” explains Bloomer. “The Hybrid Wheat Initiative provides a forum for public and private sector partners to make a list of R&D priorities on behalf of industry that, together with public funding and research capabilities, we can resolve.”

The meetings that have arisen from the Initiative have already identified fundamental knowledge gaps in the understanding of hybrid vigour.

“What are the underlying genetic, epigenetic, molecular and physiological processes that collectively result in heterosis?” Asks Hall. “These are the missing links we must address if we are to meet the challenge of developing a commercial hybrid wheat crop.”

Importantly, the initiative has also laid the foundations of a mutually beneficial “safe space” where companies can convene to discuss collaborations on a range of agronomic challenges, not limited to hybrid wheat. The companies involved in the collaboration breed other key arable crops in the UK, including oil seed rape, barley, oats, rye and maize.

“Plant breeding is a very long term and expensive undertaking,” concludes Serazetdinova. “We came together to address the critical problem of hybrid wheat, but this network will allow public and private collaboration on a range of strategic challenges in crop research.

“Through the Hybrid Wheat Initiative, we're shaping the future of crop research.”