In recognition of Charles Darwin’s remarkable discoveries, we thought we’d reflect on how genomics research has progressed since his work formulating the modern theory of natural selection.

In recognition of Charles Darwin’s remarkable discoveries, we thought we’d reflect on how genomics research has progressed since his work formulating the modern theory of natural selection.

Some of his strongest evidence is derived from observations of finches in the Galápagos Islands and their varying beak shape and strength matching the types of seeds and nuts available to them in their respective habitats.

Subsequent research has identified the genetic basis of that range of beak forms, and furthermore, there are some fascinating aspects of avian evolution that have been discovered. Let’s have a look at what a contemporary biologist might say to Charles Darwin about this – if they had five minutes to do so.

Birds have been around for a long, long time, and there are roughly around 10,000 avian species today. We’re pretty certain that many dinosaurs were feathered, and that birds represent the descendants of certain dinosaurs.

That may come as a surprise if, like me, you grew up with pictures of reptiles (like alligators and monitor lizards) harking back to Jurassic forms. But egg laying in birds is a clue to their ancestral legacy.

Modern genomic sequencing has only recently reached the point where it’s affordable and feasible to answer questions like: “exactly how have Darwin’s Galápagos finch beaks diversified?” That sort of research requires multiple birds to be sequenced for a comparative study, with appropriate statistics to sift the correct results out of the background genetic complexity.

There are at least two variants known in finches, one ancestral and one ‘new’…

A reasonably detailed answer to that question was published in Nature in early 2015, with one particular gene identified as likely to be the biggest causative factor – ALX1.

This is an over-simplistic answer; many genetic loci were associated with the difference between blunt and sharp finch beaks, but there’s strong evidence that ALX1 is the prime causal candidate.

There are at least two variants known in finches, one ancestral and one ‘new’, which segregate such that the vast majority of finches with blunt beaks are homozygous for the ‘new’ allele.

Also, humans lacking the equivalent ALX1 have disrupted craniofacial development – this is a transcription factor affecting developmental tissue patterns through many genes.

The same study shows that there has been a significant amount of admixture between the island populations – so the variation/speciation has occurred in spite of this lack of breeding barriers, over the last million years or so, which is very recent on an evolutionary timescale.

Similar rapid radiation of traits under natural selection is also evident in the Tanager family, a very large and heterogeneous family of birds – though these only split from the avian phylogenetic ‘tree trunk’ around 14 million years ago.

A small change in DNA sequence can cause profound functional effects if the change occurs at the top of a cascade of gene control. Redpolls show a good example of this – a mere handful of species are widely spread around the whole Northern hemisphere, showing a wide range of characteristics belying their breeding compatibility.

So the control of genes, rather than changes in those gene sequences per se, allow rapid evolution without necessarily isolating the subpopulations or relying on new speciation. Epigenetics probably accounts for much of this flexibility – chromatin structure of the DNA changing rather than DNA sequence itself.

These insights into avian evolution have come on the back of an enormous international effort to sequence and compare 48 species, yielding a treasure trove of papers in 2014.

The sequence evidence has re-drawn the family tree (phylogeny) of birds by a surprising degree, showing some errors in the morphology-based classification.

Particularly where convergent evolution has led to physical similarities between bird families that are not particularly closely related, e.g. Penguins and puffins. Notably, falcons are more closely related to parrots than to hawks!

This research is vital too for conservation efforts. Some species of finch are critically endangered and are at risk of going extinct in the near future. 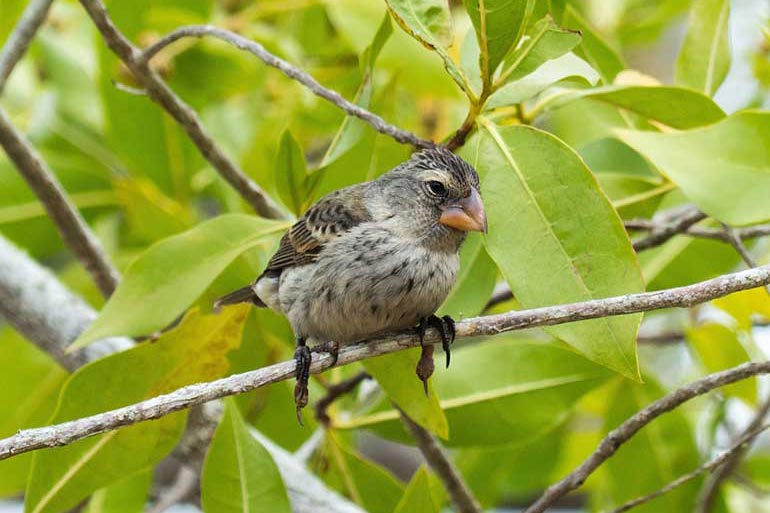 I think Darwin would be delighted to learn that there are such strong, parallel demonstrations of physical traits sculpted to fit an ecological niche. What better evidence of natural selection?

It might be difficult to conceive how a complex trait or morphology could evolve in a series of small steps, with doubtful selective advantage at an early stage, but evidence that it has occurred more than once goes a long way to answer those doubts.

Birdsong harks back to speech

Another great example of convergent evolution shows up in the mechanisms that gave rise to birdsong.

Vocal learning evolved at least twice in birds, and there are striking similarities between parrots, songbirds, hummingbirds and humans in this regard – our brain tissues show altered expression of a group of just over fifty genes, compared to non-vocal learning birds and primates.

This gene set might have remained a lot more obscure without the avian genomics research.

Hummingbirds, by the way, are not very closely related to parrots or songbirds – their ancestors split from the common avian lineage before the Cretaceous Period, almost 80MYA. Parrots’ ancestors split about five million years later, after the ancestors of flamingos, doves, gulls, and birds of prey.

Finally, some further noteworthy details about hummingbirds – they have really small genomes – even in the context of avian genomes being small amongst tetrapods.

This genomic size constraint, along with small red blood cell size, large heart and lung volumes, mitochondrial prowess, and uniquely efficient fructose metabolism appears to be linked to hummingbirds’ high rate of metabolism (highest of all vertebrates). But perhaps not; there are four exceptional yet unrelated hummingbird species in humid, evergreen rainforest habitats showing significant genomic expansion (more than ten per cent above average for the group).

I’m sure that Darwin would be fascinated by these details and the questions raised by them, and really humbled by the weight of evidence confirming his work.

It may be that genomics is soon to reveal further major surprises about birds – we are only just uncovering some of the gene regulation networks that are likely to be so important in such an ancient family tree.