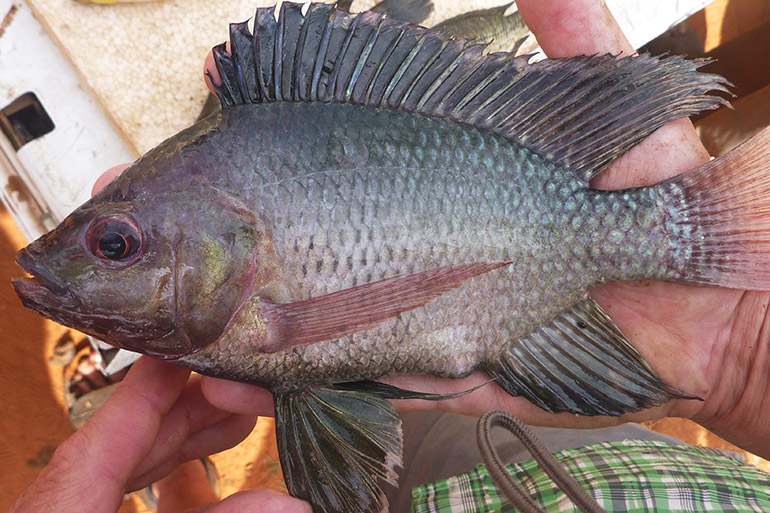 Aquaculture is becoming more common - and more important - but the potential impact of fish farms on native biodiversity and ecosystems is only just surfacing. A new DNA study highlights the scale of hybridization taking place between native and introduced tilapia in Tanzania, which has negative effects on both local biodiversity and aquaculture production.

Farmed tilapia escapees are cross-breeding with native fish in Tanzania - threatening the status of a unique population only recently discovered in the south of the country - according to new research from the University of Bristol, the University of Roehampton, Bangor University, the Tanzania Fisheries Research Institute (TAFIRI) and the Earlham Institute.

Cross-breeding - leading to the hybridization, or transfer of genetic material between farmed and native fish - harms both biodiversity and the yield of fish farms, a vital source of food and economic stability. The researchers are now developing genetic resources to quickly identify the issue in fish populations so that action can be taken.

Nile tilapia (Oreochromis niloticus) is farmed worldwide due to its fast growth and high tolerance to a range of environmental conditions. Unfortunately for Tanzanian aquaculture, these traits also mean it can outcompete native species in areas where it is introduced.

This is putting closely-related, local varieties of tilapia at risk, such as Oreochromis korogwe, which was known to live in the north of Tanzania but has only recently been identified in lakes in the south of the country.

Recent papers from the same research group show that invasive Nile tilapia have hybridized with other native species in Tanzania. The capture of O. korogwe fish that seem to share features from both native and farmed tilapia has confirmed these fears and raised alarm bells amongst the researchers.

“Because we already knew that the Nile tilapia had the potential to breed with native species, we wondered whether this might present a problem,” said Dr Adam Ciezarek of the Haerty Group at Earlham Institute. “Native fish can often be adapted to very specific local environments, adaptation which might break down through cross breeding with invasive tilapia.”

A genetic analysis using microsatellites revealed that these fish were indeed hybrids, but whole genome sequencing of different populations of O. korogwe in the north and south of Tanzania revealed something quite unexpected.

“As well as looking at the recent hybrids, we wanted to look at the genomes of the other fish,” said Ciezarek. “We saw that all the O. korogwe we investigated from the lakes in the south of Tanzania, even those that don’t look like hybrids, have some Nile tilapia DNA in their genome.”

Interestingly, O. korogwe fish in the North of Tanzania, which do not show any recent hybridization currently with the Nile tilapia, lacked any evidence of this mixing of genetic material.

“You would expect the two populations of O. korogwe to be most similar to each other,” said Ciezarek. “But there are quite large parts of the genome where the southern O. korogwe and the Nile tilapia are the most closely related to each other, which suggests there has been fairly recent gene flow between them. These are quite long stretches of DNA - about half of one chromosome seems to have been introduced from Nile tilapia into the southern O. korogwe.”

Tanzania is home to thirteen unique species of tilapia, including O. korogwe. The differences between O. korogwe in the north and south of Tanzania highlight one of the great points of concern for local biodiversity, whereby unique populations of fish that are only just being discovered are already threatened.

“We identified unique populations of fish that are distinct from other populations,” says Dr Antonia Ford of the University of Roehampton. “Already as we’re describing that new biodiversity, we’re finding it’s hybridizing with introduced species. It’s as if it’s already being lost before we even knew it was there.”

In a vicious feedback loop, hybridization also has a negative impact on local fish farms. Accidentally introduced hybrid fish can breed with the specially-bred farm varieties, which over several generations leads to stunting and a reduction in yields. This can cause ponds to lose economic viability.

It’s therefore important for both farmers and biodiversity that we can detect, and prevent, such hybridization events. The team is now developing genetic resources to help breeders and conservationists detect hybridization, even in juvenile fish where hybrids are more difficult to identify compared with adults.

“In the long-run, we hope that our work will help inform conservation and management of indigenous tilapia species in Africa, through interventions that benefit both the natural environment and people,” says Professor Martin Genner of the University of Bristol.

“An important next step will be to build a more complete understanding of the combined ecological, social and economic factors underlying the impact of invasive species, and this will enable measures to be identified and implemented that equally promote biodiversity conservation and food security.”