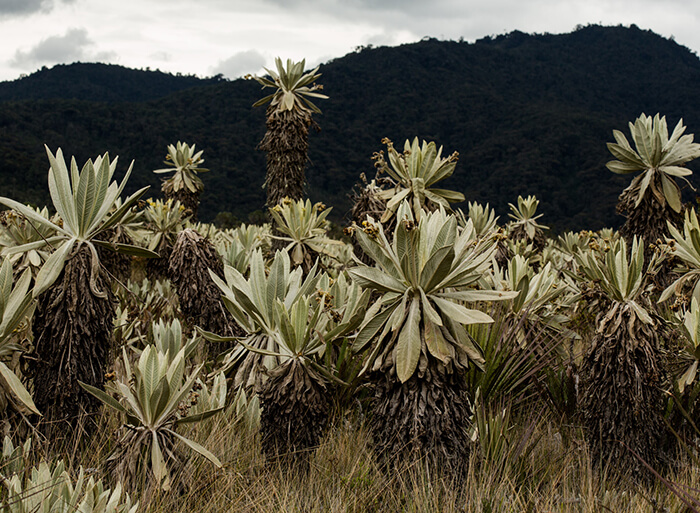 Researchers are embarking on a major collaboration to characterise Colombia’s plant and animal life, from densely rich cloud forests to little-seen museum collections.

International research organisations led by Prof Federica Di Palma Director of Science of the Earlham Institute have formed BRIDGE Colombia, a multidisciplinary network, to understand, promote, and preserve Colombia’s biodiversity through responsible innovation. The partners met for a workshop in Bogota on 13-15 March to agree new ways to protect and valorize Colombia’s natural diversity in this post-conflict era.

Colombia is a “megadiverse” country, home to nearly 10% of the planet’s total biodiversity and almost one in 20 of all plant species worldwide. Over half is covered by forest, while wetlands and vast tropical grassland add to the mix. Record numbers of rare species abound including around 100 endangered mammals, 34 species of endangered hummingbird, and 2,500 plant species in danger of extinction.

From an initial team of four people a year ago at the Earlham Institute, Prof Di Palma has galvanised support from 23 UK and Colombian organisations to create a lasting legacy of research to benefit the wildlife, landscape and people.

“As well as being a source of wonder, the abundance of life in Colombia is essential to help end hunger and malnutrition and to achieve economic growth and peace,” says Prof Di Palma.

“We would be nothing, eat nothing and breathe nothing, without the diversity of life that exists on this planet. If biodiversity is lost, so is the ability to adapt to challenges like population growth and climate change,” she says.

The new network will help build Colombia’s research capacity, an opportunity made possible by the peace process signed with armed groups. As well as characterising the country’s biodiversity, research is needed to demonstrate the economic value of natural resources and to develop the bioeconomy.

Some of the most remote and richly biodiverse areas of the country were under control of armed groups and inaccessible to researchers. There are now fewer restrictions to conduct studies in the field. Just last year a new species of golden frog was discovered in the high Andes and further discoveries might now be possible. Field studies are also needed to understand the threats to biodiversity so that effective policies can be put in place to curb them.

UK institutions can provide access to technology, such as advanced genetic sequencing and informatics, as well as expertise through exchange programmes and training. The University of Sydney is also involved in the network, sharing experience with species conservation and management programmes. Research projects within the network are helping to establish species’ conservation status, improve crop breeding to make farming more efficient and assess socio-economic challenges associated with biodiversity.

At the recent workshop, the partners agreed on resolutions to protect existing biodiversity, to use biological resources in a sustainable way and to improve the technological self-sufficiency of Colombia. Resolutions also focus on reconciliation to help promote economic growth for all.

The new network supports ongoing efforts to build a biodiversity inventory of Colombia. For example, via the Colombia BIO programme launched last year to increase the Colombian inventory and genetic library of biodiversity and to strengthen biological collections.

The Network is strongly aligned with the Colombia BIO initiative (led by COLCIENCIAS), and associated Newton Fund research partnerships (BBSRC, NERC, AHRC). The Network also works to align with the aims of the Ministries of Environment, Agriculture, and Post-Conflict, to guide the priorities and activities.

“At this very important time in Colombian history, we can connect academic and private institutions in the UK and Colombia to generate the knowledge necessary for stimulating economic and social growth around our rich natural heritage.”

“The historical moment Colombia is going through requires the country to connect with the world’s best research practitioners. This is a unique opportunity for Colombia and the UK to work together on science and innovation to create a sustainable bio-economy. This network is a good example of the kind of partnerships that will make it possible.”

Colombian organisations in the network: