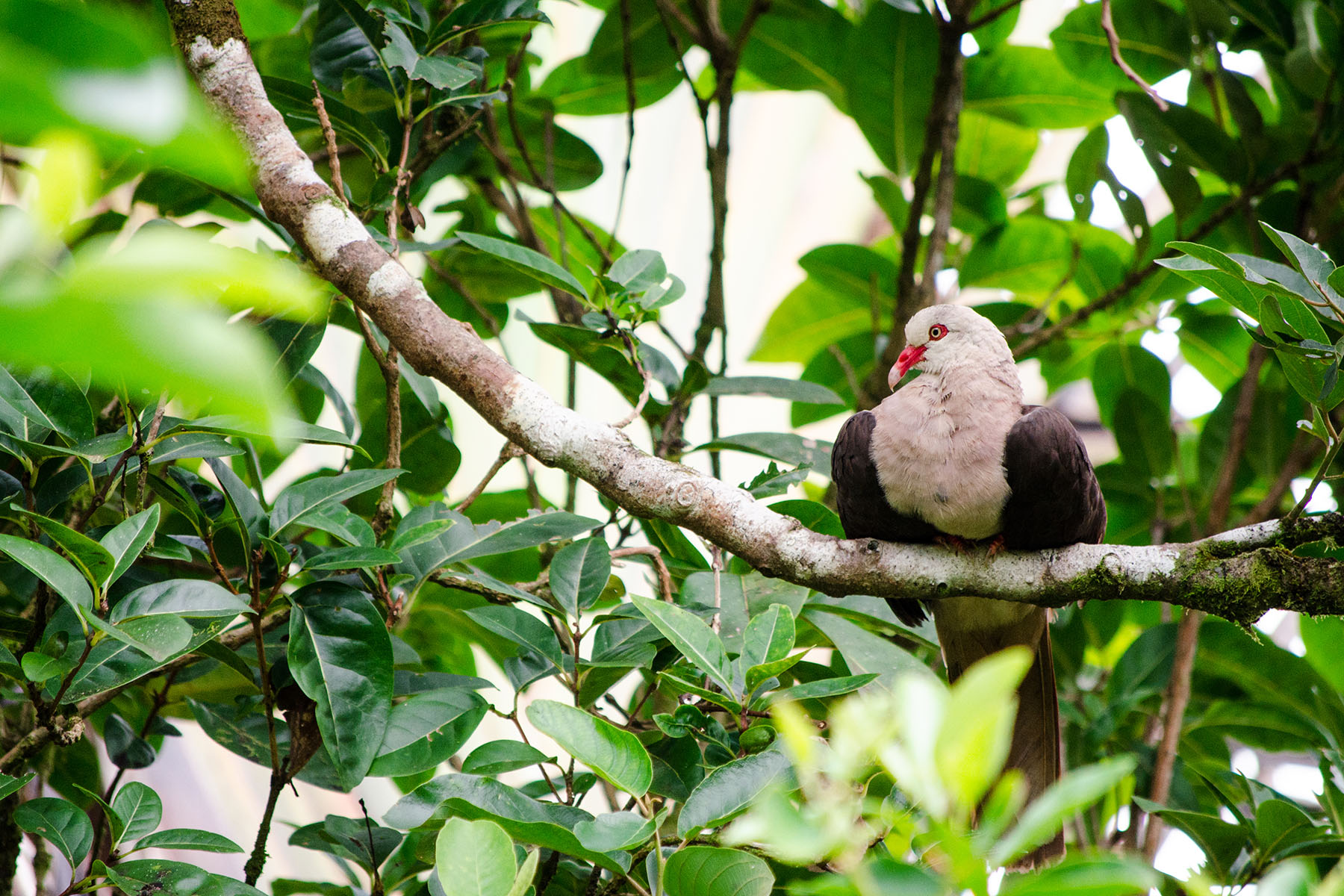 Boosting numbers of the once critically endangered pink pigeon may not be enough to save it from extinction in the future, according to a major study on the iconic species.

Despite the population increase, the researcher’s analysis shows the pink pigeon has a high genetic load of bad mutations, which puts it at considerable risk of extinction in the wild within 100 years without continued conservation actions.

An international collaboration led by scientists from the University of East Anglia (UEA), Earlham Institute, and Durrell Institute of Conservation and Ecology (DICE) at the University of Kent - working together with organisations on the ground in Mauritius - investigated the genetic impacts of a population ‘bottleneck’.

The bottleneck came after a rapid and catastrophic collapse in numbers that affected the pink pigeon from Mauritius in the late 1980s. At one point, there were only believed to be 12 surviving birds in the wild.

The team of researchers analysed the DNA of 175 birds sampled over nearly 20 years as subsequent conservation efforts took place.

With the help of biologists from the Mauritian Wildlife Foundation and the Durrell Wildlife Conservation Trust, and in partnership with the Government of Mauritius’ National Parks and Conservation Service, the free-living population of the species has increased to around 500 birds.

Consequently, the pink pigeon has been down-listed twice on the International Union for Conservation of Nature Red List from critically endangered to vulnerable. But, to keep these populations viable, the researchers warn a ‘genetic rescue’ is needed to recover lost genetic variation caused by inbreeding and to reduce the effects of the harmful mutations. This could be achieved by releasing captive-bred birds from UK and EU zoos.

The study, published in Conservation Biology, used conservation genetic work at DICE, cutting-edge genomic techniques developed at UEA and the Earlham Institute, and computer modelling to closely examine the species’ DNA and assess the risk of future extinction, as well as forecasting what needs to be done to secure the pink pigeon’s viability. The authors say their findings could help other threatened species.

“By studying the genome of a recovered species that was once critically endangered, we can learn how to help other species to bounce back from a population collapse,” said UEA’s Prof Cock van Oosterhout, one of the lead authors.

“During the pigeon’s population bottleneck, the gene pool lost a lot of variation, and many bad mutations increased in frequency. This genetic load still poses a severe threat, even though the population has recovered in numbers.” 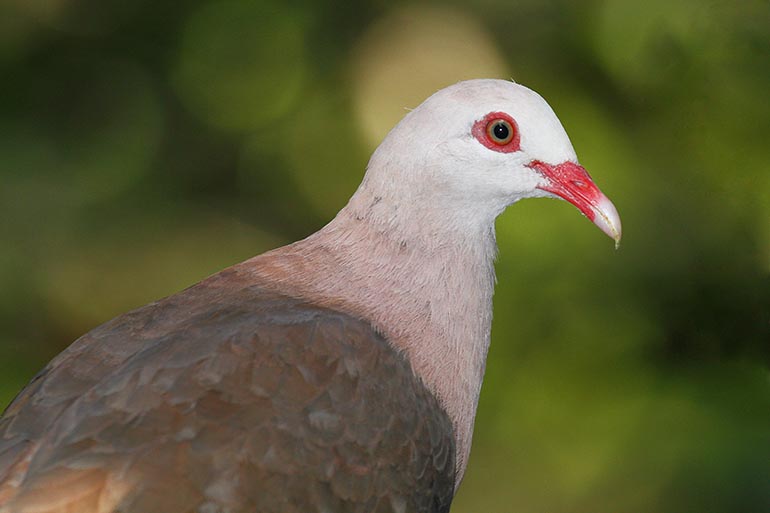 Prof van Oosterhout, of the School of Environmental Sciences at UEA, added: “The problem is that all individuals are somehow related to each other. They are the descendants of the few ancestors that managed to survive the bottleneck. Hence, it becomes virtually impossible to stop inbreeding, and this exposes these bad mutations. In turn, this can increase the mortality rate, and it could cause the population to collapse again.”

Dr Camilla Ryan, who worked on the project at the Earlham Institute and UEA, said: “Our bioinformatics analysis indicated the importance of genetic diversity and the unique genetic rescue model to help other species from the brink of extinction. This research highlights the value of collaborations between NGOs, institutes and universities which draw together a range of expertise. This ensures that a holistic approach is taken to a species conservation which includes an understanding of its genetic health.”

Prof Jim Groombridge, from the University of Kent, explained how the initial recovery of the pink pigeon population was achieved: “A captive population of pink pigeons in the Gerald Durrell Endemic Wildlife Sanctuary in Mauritius, jointly managed by the Mauritian Wildlife Foundation and the National Parks and Conservation Service, was established in the 1970s.

“This was used to breed birds for release into the wild, which boosted population numbers. The team also restored habitat by controlling introduced species and provided supplementary food as part of a field programme of intensive conservation management, which further increased the free-living population.”

The study used sophisticated software called SLiM that can model an entire bird chromosome, including all its bad mutations. The researchers simulated the bottleneck and population recovery, and then they compared the predicted outcomes of different reintroduction programmes. The study was therefore able to predict the viability of the population in the future under different conservation management scenarios.

“We didn’t know how many bad mutations the population carried initially, before the bottleneck,” said Dr Hernan Morales from University of Copenhagen, in Denmark, who performed the SLiM modelling. “We first had to simulate the ancestral population to find out how many bad mutations could have evolved. We then checked this data with data on inbreeding depression data from zoo populations of the pink pigeon.”

Using pedigree and fitness data held at Jersey Zoo for over 1000 birds, the team estimated the genetic load, which showed that the pink pigeon carried a high genetic load of 15 lethal equivalents. This was then used to calibrate the computer models.

“The computer simulations clearly show that just boosting numbers isn’t enough,” added Dr Morales. “The population also needs ‘genetic rescue’ from more genetically diverse birds bred in European zoos. These birds are not as closely related, and they can help to reduce the level of inbreeding. However, there is a risk that we could introduce other bad mutations from the zoo population into the wild.”

Sam Speak, a PhD student at UEA and co-author of the paper, added: “We are now analysing the genome of the pink pigeon from zoo populations here in the UK, trying to locate these bad mutations. We can do this now using bioinformatics tools developed for studying human genetics and the genomes of other model bird species such as the chicken.

“By using conservation genomics, future reintroduction programmes can avoid releasing individuals with high genetic load. This would help reduce inbreeding and improve the long-term recovery of threatened species such as the pink pigeon.”

‘Genomic erosion in a demographically recovered bird species during conservation rescue’ is published in Conservation Biology on May 13th, 2022.