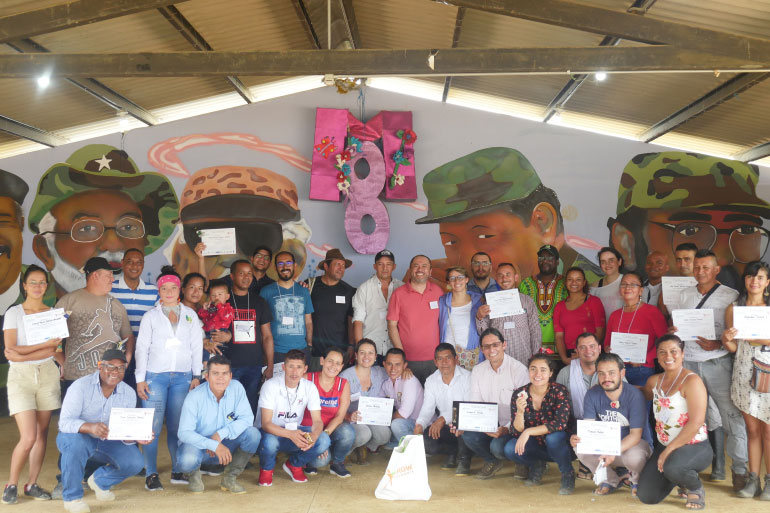 Researchers from the Earlham Institute and the University of Sydney are working with ex-combatants of the Revolutionary Armed Forces of Colombia (People's Army FARC-EP*) to grow their capability to protect the country’s valuable biodiversity.

The initiative - part of the GROW Colombia research programme at Earlham Institute (EI) - will use the power of nature to drive sustainable development and empower former members of the FARC-EP to become conservationists. A vital step to enable them to contribute to environmental projects, improve their livelihoods and reincorporate into society.

Colombia ranks second in the world in terms of biodiversity, which is not only important for the country’s natural heritage and preservation of unique species but also to improve  social equity and economic development.

Colombia has been through almost 55 years of internal conflict which has resulted in more than 200,000 people killed and millions of displaced people and victims. The peace agreement signed in 2016, has created a new sociopolitical environment providing an opportunity to link biodiversity to the reincorporation of more than 10,000 FARC-EP ex-members into Colombian civil society.

The recent peace agreement between the rebels (FARC-EP) and the Colombian government has opened opportunities to access geographical areas that were not possible to study before.

A unique environmental and socioeconomic initiative, the GROW Colombia capacity-building programme involves training workshops in areas of biodiversity for ex-combatants to contribute their experience and acquire new skills for conservation and sustainable biodiversity.

Project lead Jaime Gongora, Associate Professor of Conservation Biology at the University of Sydney, said: “This is the first step for the ex-combatants to contribute to inventories of biodiversity in their communities, participate in expeditions organised by the central government and local universities, and develop ecotourism projects. As a result they will be better informed when considering biodiversity, conservation and environmental sciences. These skills have the potential to generate sustainable activities based on green markets, enhance their tertiary education and professional futures and help with the reincorporation process”

“We are providing a pathway for the former guerrillas to become citizen scientists and protect biodiversity in Colombia,” said Professor Gongora, a dual national with Australian and Colombian citizenship.

By establishing their own national committee, the participants were given the tools such as cataloguing of species and sampling skills, to coordinate and promote their own biodiversity and scientific tourism initiatives. Strengthened by a cross-institutional working group (government, academic, scientific institutions and agencies) to support and initiate biodiversity and scientific tourism as part of the reincorporation process. There was also an increasing interest in ‘integral ecotourism’ within the cooperatives created in the local areas.

‘Juan Camilo’ a former FARC-EP ex-combatant and member of the Social Economies of the Common Council which looks after more than 120 economic and social organisations towards the reincorporation of FARC ex-combatants, commented: “FARC-EP contributed to the conservation and maintenance of important ecosystems in this country. The current training by GROW Colombia is the first initiative at the national level that enables ex-combatants to put their local knowledge of nature in a context of science and establish a national body to coordinate their biodiversity and ecotourism initiatives. This is just the beginning in exploring the potential that biodiversity can have for the reincorporation of FARC-EP including for the establishment of ecotourism initiatives.”

Professor Federica Di Palma, Director of BRIDGE-Colombiaadded: “The development and delivery of our ex-combatant training is a great achievement. Our GROW Colombia programme aims to strengthen biodiversity characterisation, conservation and management to sustainably grow the bioeconomy in one of the most biodiverse countries in the world, while ensuring social inclusion through equitable partnership.

“The latter is exemplified by this achievement and it comes at a crucial time for Colombia as it seeks to give root to the fragile shoots of peace, secure political stability and socially integrate post-conflict communities."

To achieve this project a range of institutions were brought together, including the Social Economies of the Common ECOMUN and the Agency for Reincorporation and Normalisation ARN among others. GROW-Colombia is supported by a Global Challenges Research, UK Research and Innovation Fund (GCRF-RCUK - UKRI) grant led by the Earlham Institute (United Kingdom) and in partnership with the University of Sydney (Australia), other UK and Colombian institutions.

3.) Other participant feedback - perspectives from the FARC ex-combatants who attended the biodiversity workshops

‘Yesenia’ is a mother of two children who joined FARC when she was young after the paramilitary killed her parents. Years after, she was detained and put in jail, time that she used to study and graduate from psychology. Since the peace agreements, she has been living in the ETCR of Mesetas (near the centre of the country, to the east of the Andean mountains) and applying her studies to support the victims, women in particular, of the Colombian conflict. During the biodiversity workshops, ‘Yesenia’ contributed very articulate and interesting ideas to the discussions and showed her leadership skills, she commented: “This capability has allowed FARC-EP ex-combatants to gain new knowledge from universities and research institutions to strengthen their commitments and responsibilities towards the peace process. If we want this peace process to succeed, it will require the continued involvement of the various components of society including science and universities.”

‘Curruco’ from the ETCR of Pondores in northern Colombia is one of the senior ex-combatants at the workshops, he spoke of the way he had his own farm with a good number of cattle but was displaced by armed conflict with little option to save his livelihood other than joining former FARC-EP guerrillas. During the workshops, ‘Curruco’ displayed his wide range of knowledge and articulate ideas and was a salient student when sighting animals during the fieldwork activities, he commented: “our participation in the workshops is evidence of our commitment to peace. We protected fauna and flora during the conflict and the current training is an excellent opportunity to learn more and ensure we continue conserving nature for the benefit of present and future generations.”

‘Solangie’ is an ex-combatant living at the ETCR of Colinas located in the central-east of the country, where the Amazon forest begins. Her knowledge on the animals of the Amazon forest was remarkable, she commented: “I enjoyed all the content of the training but I liked the bird sightings and plant cataloguing the most because during my time as a combatant we were living among the fauna including tapirs, reptiles, frogs and butterflies. I was impressed with the training about plants - in our time in the jungle, we used plants as medicine and health treatments.”

• From the ten different sessions, all were rated very positively and would highly recommend workshop to other ex-combatants.

• The hands-on and practical activities were well-received: such as inventories, participatory methodology. Participants appreciated the range of contributions; from FARC to the conservation of biodiversity, and the range of interaction with a forum of government agencies, universities and research institutes.

A recent award from RCUK’s Global Challenges Research Fund is set to stimulate the bioeconomy by increasing knowledge of Colombia’s greatest treasure, its biodiversity, following the peace agreement.

‘GROW Colombia’ aims for research excellence through promoting innovative technologies, developing resilient research capabilities, building partnerships, and fostering best practice in knowledge exchange, with longer-term goals to stimulate economic and social growth. UK-based researchers are working with Colombian researchers, industry partners and crop breeders to study the genetic diversity within the country’s unique biodiversity, documenting its distribution and the threats it faces, as well as to gain the skills needed to drive sustainable innovation and to attract further public and private funding.

Thanks to the Global Challenges Research Fund (GCRF-UK BB/P028098/1) for financial support for this GROW-Colombia initiative. This work would not have been possible without the invaluable contributions, support and facilitation from: Alex Velasquez from the University of Amazonia; Carolina Soto, Mailyn Gonzalez, Felipe Garcia and Brigitte Baptiste from the Research Institute of Biological Resources; Alexander Von Humboldt, Dairon Cárdenas and Luz Marina Mantilla Cardenas from the Sinchi Amazonic Institute of Scientific Research; Mario Murcia from COLCIENCIAS-Colombia BIO; Viviana Martinez and Jimena Puyana from the United Nations Development Programme; Mario Madrid from National Natural Parks, Colombia; Liliana Heredia from the Vice-Ministry of Tourism; Manuel Rubio, Nathalie Contreras, Juan Camilo Londoño, Ubaldo Zúñiga and Anamaria Quintero from the Social Economies of the Common; Monica Rodriguez, Juanita Ardila and Laura Bernadelli from the Agency for Reincorporation and Normalisation; the Verification Mission of the United Nations; Luis Calzadilla from the British Embassy in Colombia and all of the ETCR representatives who have participated in this program. Thanks to the ETCR of Agua Bonita en Montañita Caquetá por their hospitality. Thanks to the GROW Colombia team from the Earlham Institute team, Juan Azcárate, Natalia Valderrama, Richard Doyle, Sarah Cossey and Saskia Hervey. Special thanks to Jaime Erazo from GROW Colombia, Earlham Institute and University of East Anglia for his enthusiasm and support to accomplish this initiative. Thanks to the Sydney School of Veterinary Science, University of Sydney, for allowing Jaime Gongora to be part of this project. Thanks to our families for understanding the need for our time away while planning and delivering this workshop.

The University of Sydney is a leading research and teaching institution in Australia committed to inspiring and empowering nature of education. We are regularly ranked in the world’s top 50 universities.

We are dedicated to challenging students from a range of social and cultural backgrounds to think beyond their learned experiences and to bravely pursue a greater understanding of the world, its people and themselves.

We stand out from the rest because our excellence in teaching and our encouraging environment allows us to do so.