You don’t have to be a farmer to appreciate how annoying aphids can be. Anyone trying to maintain a garden has probably suffered some form of infestation.

At EI, we research pests such as aphids, to better inform us of the versatile evolutionary strategies that help them ravage our crops, and how we can combat their game plan.

I became fascinated with aphids when, after bringing a chive plant in from the cold, a ravenous horde descended upon our carnivorous sundew plant.

At I was amused by the odd food-triangle that lay before me. A carnivorous plant scoffing down flies, while being sucked dry by aphids. I was then bemused at how on earth this tiny green scourge managed to replicate so quickly and then merrily colonise a completely new plant species.

So, who’d have thought that several years later I would end up working at the Earlham Institute, where, along with Saskia Hogenhout of the John Innes Centre, Thomas Mathers is studying the very same pests that nearly crippled our poor sundew (turns out that the 0.01 fairy liquid to 100 water trick works splendidly to rid plants of aphids).

"A ravenous horde descended upon our carnivorous sundew plant" 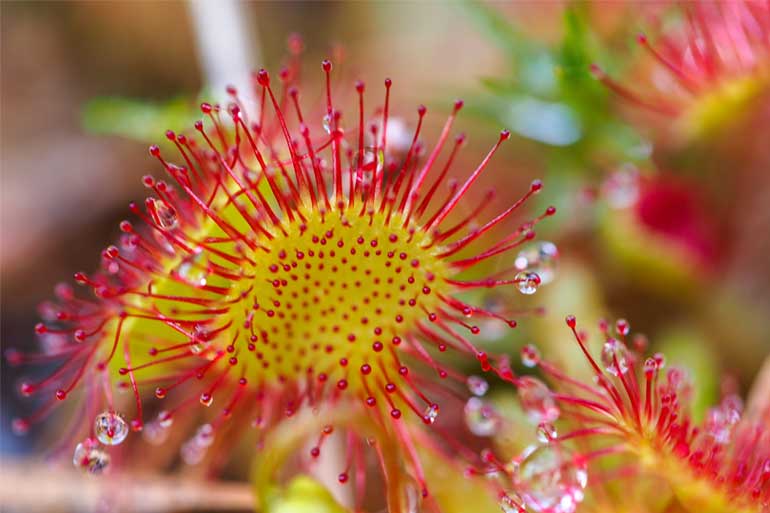 From the solanaceae to the brassicaceae; and many of our other most important groups of crops, aphids pose a threat to agricultural production as they carry, and infect plants with, a suite of diseases, including (but not limited to) potato leaf roll, potato virus Y, beet mosaic and lettuce mosaic.

We can all agree that potatoes, beet and lettuce are very important, and losing lots of them is a bad thing, therefore, the green peach aphid is a very important pest to get to grips with.

Attack of the clones.

So there were no aphids in Star Wars, but they do have a similarly maleficent way of rapidly multiplying in order to colonise host plants - and they do this by reproducing clonally (parthenogenesis).

Genetic clones; birthed live from mother clones again and again - not unlike Dolly the sheep and her family of cloned selves (all of whom are doing very well for themselves at the moment).

In cold winters, the green peach aphids tend to see out the winter months as eggs, produced by sexual reproduction, on trees such as (unsurprisingly) peach or plum.

Nymphs emerge in the spring and develop into adults, which begin to colonise their tree. These begin to produce clones until the tree is relatively infested, then some clones gain wings and fly off to summer pastures.

On their new host plant, each aphid can then produce up to 80 clones at a rate of almost two per day (in females).

This happens all summer long, with aphids flying from plant to plant, often carrying nymphs along with them from -to-field and into gardens and greenhouses. With a clonal strategy, it requires merely a gust of wind to displace one aphid and give rise to an infestation.

So how do these clones manage to colonise so many different plant species, while other pests require genetic selection to survive on only one or two? Some recent research, headed up by scientists at EI and JIC, has helped shed light on this.

When many people think of pests causing crop losses, they think of the mechanical aspects - the biting, piercing, sucking and eating. However, there’s a more insidious side, whereby pests also insert a potent mix of chemical ‘effectors’ into plants, which attempt to knock down a plant’s defenses. In return, the plants produce their own suite of defensive compounds.

Thus, plants and their pests become trapped in an evolutionary arms race, during which pests find ways to overcome plant defenses while their plant hosts find ways to circumvent these, which overall leads to greater specialisation (or so the theory goes).

However, this is where the green peach aphid comes into its own.

These incredible generalists can rapidly respond to different environmental conditions - i.e. the defenses of hundreds of plant species - by quickly turning on a variety of genes.

The hypothesis was that these aphids must have a unique set of genes that allow them to do this, but the reality is much more interesting; green peach aphids utilise a pre-existing set of genes that were generated through earlier gene duplication events in aphid evolutionary history, and exist in another close relative - the pea aphid.

It appears that the green peach aphid, in fact, has a unique way of utilising this historic gene-set, so that it can thrive on a number of otherwise inhospitable plant hosts.

The clonal aphids - with an almost identical genetic background - can switch their gene regulation (“turned on or off”) almost immediately; when transferred between crop species, gene changes can be observed within one or two days.

It’s a case of genetically identical individuals almost instantaneously changing their physical characteristics in response to their environment - a remarkable trait in a world in which specialisation is the norm.

So what sort of genes are switched on?

These incredible generalists can rapidly respond to different environmental conditions - i.e. the defenses of hundreds of plant species - by quickly turning on a variety of genes.

Turn on Cathepsin B.

Two major families of genes appeared to be “turned on” in green peach aphids colonising either Brassica rapa (Chinese cabbage), Arabidopsis thaliana or Nicotiniana benthamiana (tobacco). In tobacco, this was the Rebers and Riddiford subgroup 2 (RR2) cuticular proteins, whilst in Chinese cabbage and Arabidopsis thaliana it was the cathepsin B family.

These two families of genes, in particular, highlight the unusual (or at least, unexpected) strategy that aphids employ compared to other species.

Whereas it was expected that these two families of genes would represent recent duplications unique to the green peach aphid, in fact, the differentially regulated genes (those turned on in response to the host plant) belong to groups of genes that appeared in aphids before the green peach aphid and pea aphid lineages parted down their own evolutionary paths.


To further investigate this, the team pursued this further - with Thomas commenting, “a lot of genomic studies stop after candidate genes have been identified, whereas we were able to functionally test relevant genes for their effects on fitness.”

Indeed, when cathepsin B genes were knocked down in green peach aphids - they were still able to colonise tobacco, upon which this gene family is not induced, but the cathepsin B-deficient aphids could no longer tolerate life on Arabidopsis thaliana.

This shows how aphids can utilise distinct sections of their genetic pack in order to respond to diverse environments - and how their genetic plasticity allows them to thrive in a generalist lifestyle.

Through comparative genomics, it will be possible to explore how generalisation came about. The green peach aphid has arisen from a lineage that is predominantly specialist, therefore the team hope to identify novel genetic elements that allowed the switch to a generalist lifestyle.

By looking at other mechanisms, including the regulation of genes via other elements - both during gene expression and further down the line - it might be possible to highlight quite how these plastic pests can respond so quickly to a changing environment and their multitude of different hosts.

This research is, first and foremost, incredibly interesting to biologists due to the rarity of generalism in plant-parasite interactions - flying in the face of our most common assumptions.

In terms of food security, this research also presents a great opportunity to better understand one of the most important pest species affecting our most valuable crops. It may, for example, be possible to improve and target pesticides or genetic treatments to control aphids.

If we can highlight the genes responsible for the transition to life on specific crop species, then maybe it will be possible to generate microRNA-based pesticides to target those gene sequences that are up-regulated - and prevent aphid infestations in the future.

At least until the green peach aphid finds a way around those, too ...