Algae give us most of the oxygen in the air we breathe, yet have the voracious power to suffocate vast tracts of ocean through algal blooms. Understanding them, therefore, might help us to predict the potentially catastrophic biological cascades associated with climate change.

Algae give us most of the oxygen in the air we breathe, yet have the voracious power to suffocate vast tracts of ocean through algal blooms. Understanding them, therefore, might help us to predict the potentially catastrophic biological cascades associated with climate change.

Here, we explore some of the most common - and confusing - questions about these vital primary producers, and reveal how Earlham Institute researchers are using the latest genomics and bioinformatics techniques to answer them.

Some of these no doubt come from owners of fish tanks, while others may have been prompted by news stories, such as reports of toxic algal blooms in the Norfolk Broads. Others are questions that are difficult to answer. ‘Algae’ is a term used to describe a range of things - from green pond scum to seaweed and cyanobacteria (the famous dog poisoners).

Some algae are very plant-like indeed, including the green chlorophytes like Chlamydomonas that swim around, merrily photosynthesising in the sunshine. Yet, and to answer one question above, they can also easily survive without sunshine (just give them some tasty vinegar), which somewhat diminishes their plantiness.

That’s part of what makes algae so incredibly interesting. Chlamydomonas, much like the Euglena cells studied by Earlham Institute scientists for their potential as sustainable fuels, also has an eyespot that contains proteins very much related to the rods in the eyes you’re using to read this. Those same rods (known as channelrhodopsins), directly activated by light so that algae can swim towards it and photosynthesise more, have recently been used to partially restore sight in people.

Algae are a delectably diverse, incredibly interesting, often distinctly unrelated and wholly bizarre bunch of organisms that are neither animal nor plant but something (or more accurately, some things) very much more fascinating indeed - and almost certainly an ancient evolutionary hotchpotch of many millions of ancient ancestors of the two.

These two happy little Chlamydomonas enjoy swimming around, merrily photosynthesising in the sunshine. 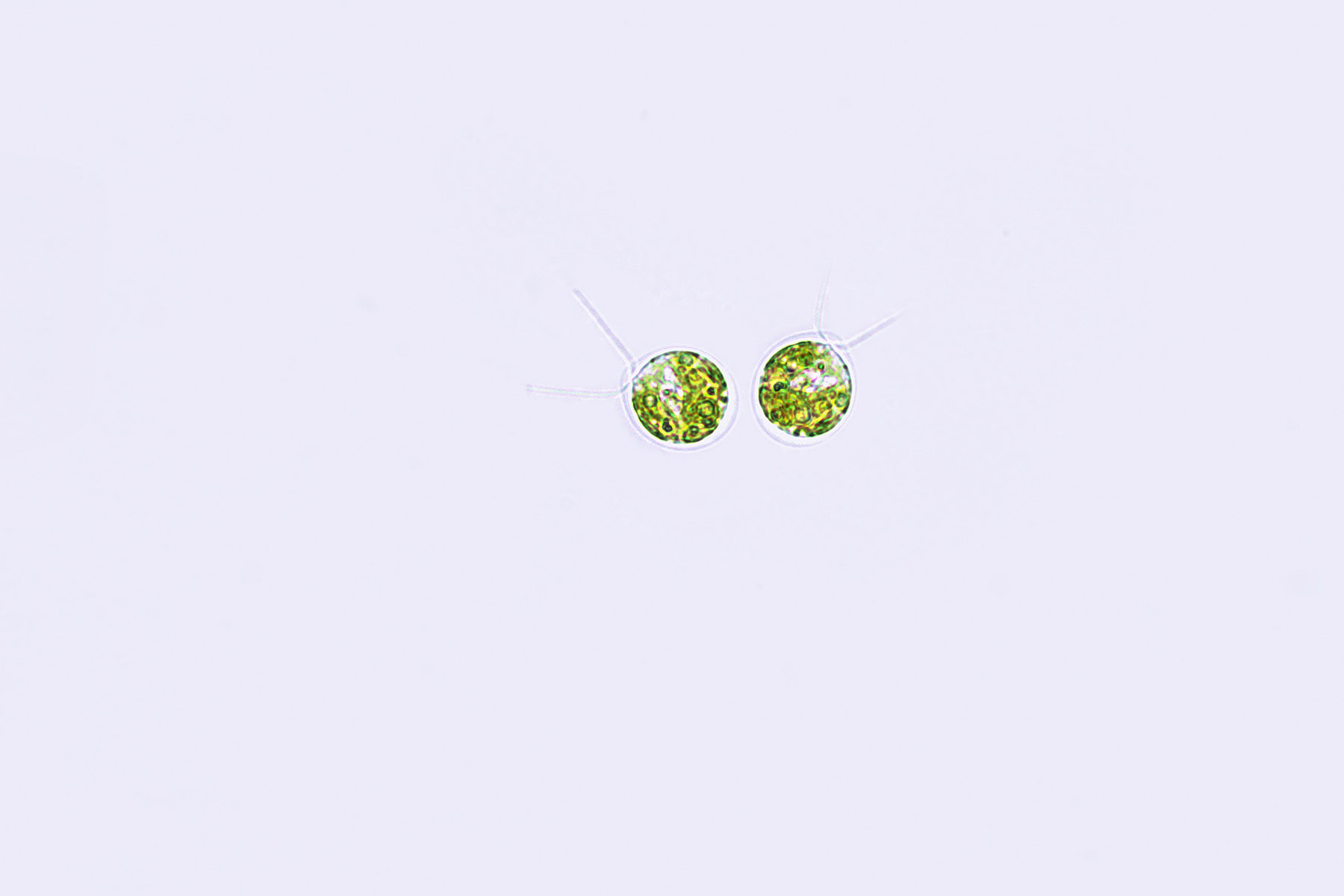 Algae are a delectably diverse, incredibly interesting, often distinctly unrelated and wholly bizarre bunch of organisms that are neither animal nor plant but something (or more accurately, some things) very much more fascinating indeed.

Technically, yes. Algal blooms are an increasing menace in certain regions of the world - particularly where agricultural waste (fertiliser run off and cow manure) is spewed out from river estuaries. Certain species of algae rather like the nitrogen and proliferate so much that huge swathes of ocean, measuring thousands of square miles, become ‘dead zones’. No fish, just oxygenless murk.

Some algae, including various species of dinoflagellate responsible for ‘red tides’, contain potent neurotoxins, some of which cause things like shellfish poisoning.

Largely, however, algae feed fish. Through harvesting carbon dioxide and sunlight, they make the sugars that eventually - after various stages of things being eaten - make salmon. They’re by far and away the biggest primary producers on the planet.

Between the blue-green bacteria (sometimes confusingly called algae) and all of the photosynthesising protists we also call algae, you’re looking at well over half of all the oxygen produced on Earth (and about 25% of our carbon emissions gobbled up - thanks algae).

A look from space reveals just how many of these things there are in the ocean. Satellite imagery shows dazzling blue patches of coccolithophores hugging our coastlines each summer - the same tiny, calcium carbonated creatures that make up our crumbling white cliffs of dover. That’s right, you can thank algae for chalk, too.

A red tide blooms off the coast of Japan.

Are algae prokaryotic or eukaryotic?

For the sake of simplicity, let’s say algae are eukaryotes and leave the blue green bacteria to their equally fascinating but very much different photosynthesis. Maybe we’ll stick to chlorophyll, or derivatives thereof. Then again, many algae don’t harvest sunlight anymore. At the very least, let’s look at single celled organisms with a nucleus. Except when they’re seaweed.

Clearly, we need better definitions for our incredibly diverse web of life.

This biodiversity keeps both the ocean churning nutrients and scientists turning sleeplessly in their quest to categorise it. Ask the Earlham Institute’s Sally Warring how many species of algae are in the average garden pond and she’ll quite rightly ask you to hazard a guess. It’ll be as good as ours.

One person getting to the bottom of this tricky issue (or perhaps just about scratching the surface for the first time) is Jamie McGowan, a postdoc here at Earlham. He’s working to isolate single algae cells from environmental samples and somehow place them on the tree of life, as part of the Darwin Tree of Life Project.

He’s got quite a task on his hands. While many algae have something moderately recognisable about their shape or form - a glass cell wall perhaps indicating a diatom - some are, in McGowan’s words, simply “dark green blobs”.

Often those blobs will only survive in their very specific habitat, along with very specific bacteria or communities of other cells. That means we cannot grow them in a lab to make more of them. By the time you’ve gone to the lengths of isolating them from a sample, they might well have died and the only DNA you can extract is from the bacteria feasting upon them.

However, we’re getting there - inventing procedures in the process - with some fascinating results that will help us understand more about the evolution of all eukaryotic life. In one cell, McGowan reports to have sequenced the DNA of several completely novel viruses - never before described.

These beautiful shapes are the glass cell walls of diatoms, which can be used as catalysts for industrial chemical reactions 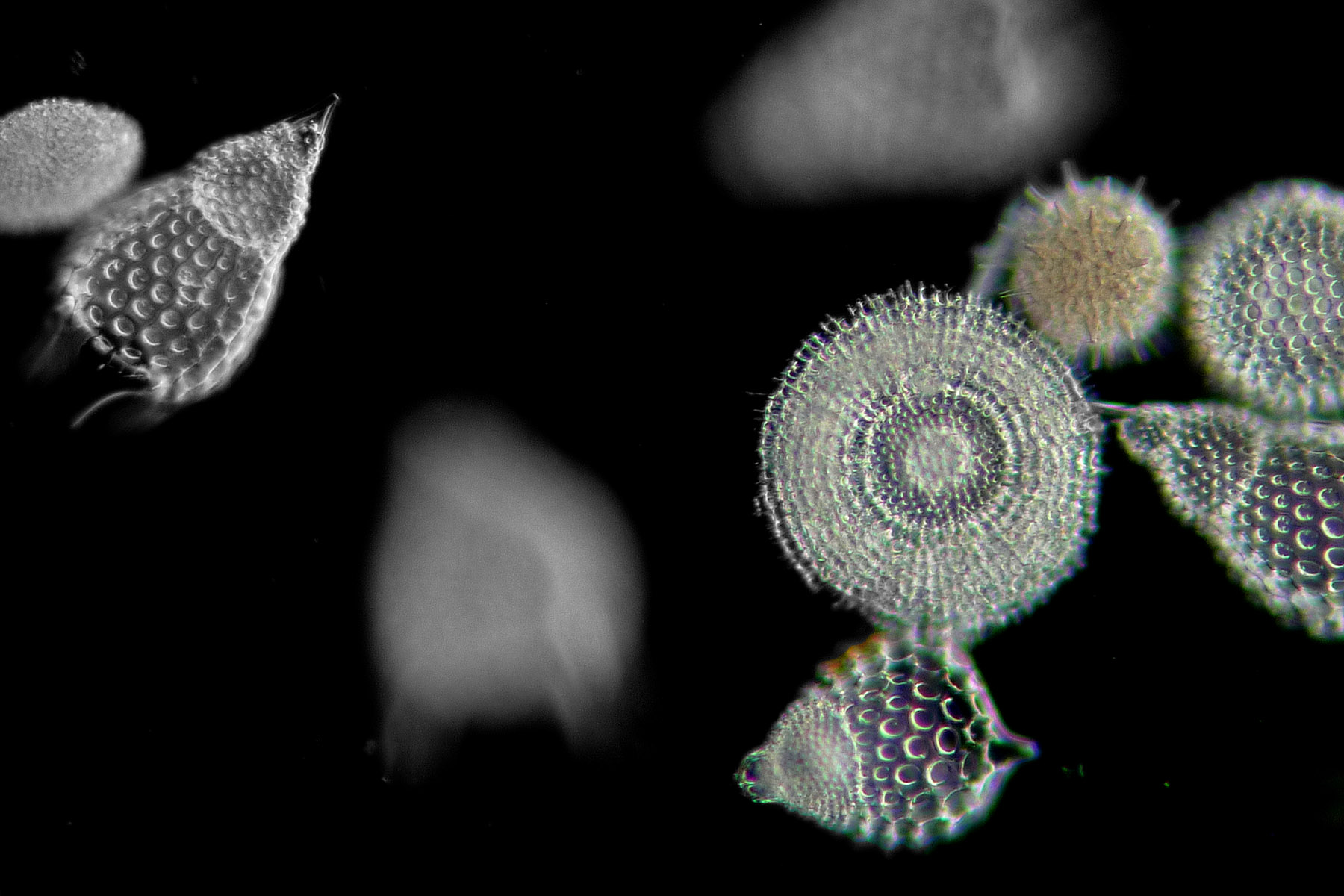 How does climate change affect algae?

You can take this approach more broadly, and, rather than painstakingly isolating single cells, try to use a technique called metagenomics to look at whole stretches of the ocean. This is equally tricky, just at scale.

It’s critically important. The popular internet search, “where algae are abounding”, seems innocent enough - but it has very real consequences.

In a tremendous global feedback loop, it’s thought that the devastating Australian wildfires of early 2020 - said to be driven largely by increased temperatures - have given rise to yet more blooms.

Recent research from the Earlham Institute and the University of East Anglia also describes how climate change is driving ‘abrupt’ shifts in algae communities, which has cascading and largely unpredictable effects on our ocean food chains.

As the oceans get warmer, algal populations shift northwards and southwards. On the one hand, this suggests that biodiversity would increase. On the other hand, considering the rate of change, it could well be harmful to ocean conservation, food chains and fisheries in the short term.

Dead fish wash up on the shore after a red tide event in America. Changing ocean temperatures are expected to cause abrupt changes to algae communities which will have a devastating knock on effect on our aquatic food chains. 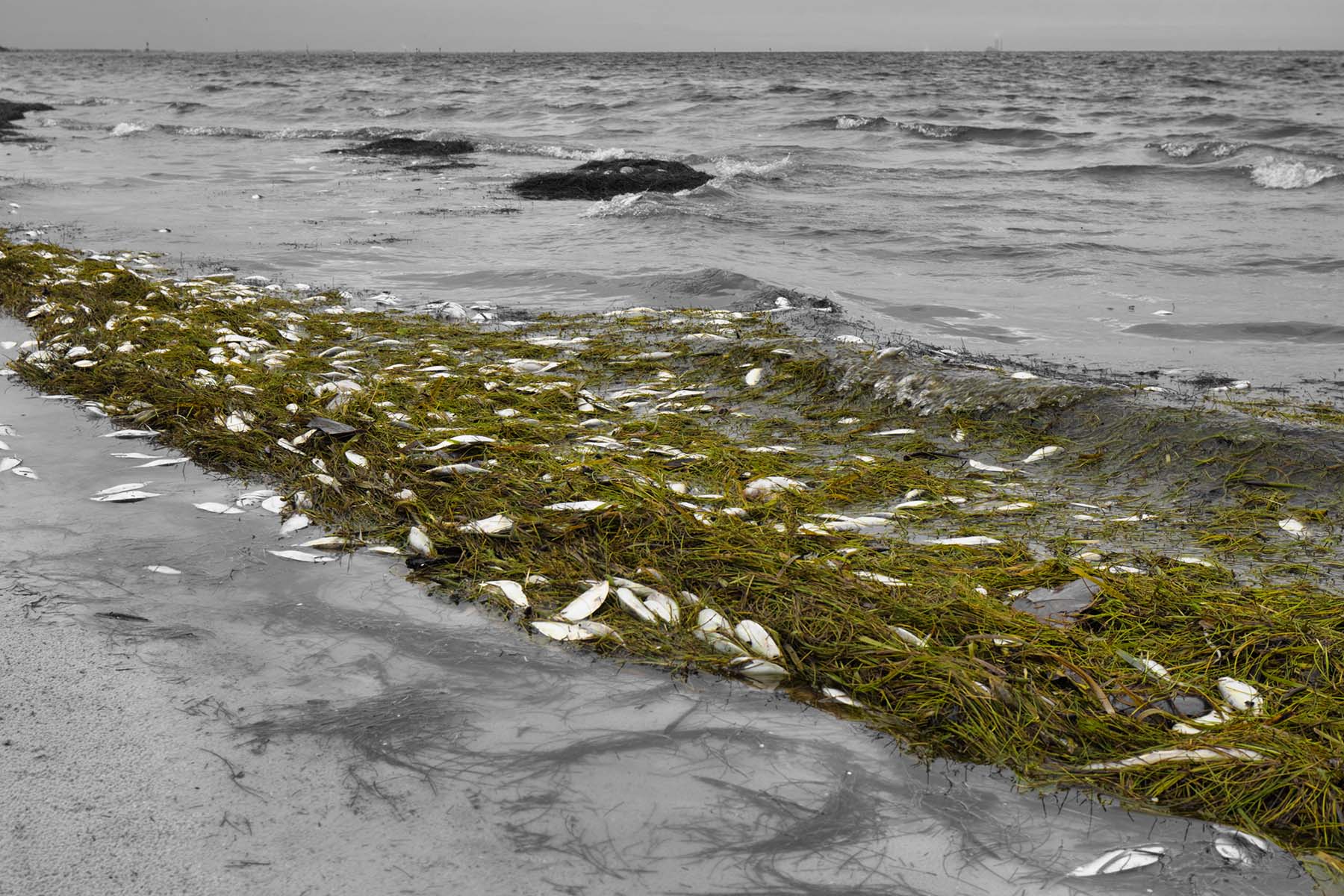 Earlham Institute PhD student Anthony Duncan has been using computational techniques to identify algal DNA amongst samples of seawater taken from polar and nonpolar regions. Despite the complications of having to wade through masses of bacterial DNA, he has managed to apply a technique known as binning to separate the genomes from the scum, and seen that there is a stark contrast between the types of algae found in the Arctic circle compared with more southern regions.

In essence, you can draw a line where the temperature of the ocean drops - to an average of 15℃, say - and above it you see very different algae, which have very different functions. A look at their genes shows that they tend to have more specific functions, such as the ability to cling to ice.

It’s easy to see how a shift in temperature would therefore radically change the composition of the oceans in formerly frostier frontiers.

Algae and climate change are inextricably linked. They gobble up a lot of our emissions, yet bloom in great numbers due to the misplaced disposal of our egestion, and follow the warming waters to encroach ever further towards the poles.

From bloom to bust, therefore, research into algae is sure to help us model the biological effects of climate change more effectively than ever before, and perhaps one day guide us to a cleaner, greener future.