Neither animal nor plant, this single-celled protist gets its energy from both food and sunlight

Euglena is a genus of single-celled eukaryotic organisms found in stagnant freshwater such as ponds and lakes, forming a visible green (or sometimes red) scum on the surface. When scientists refer to Euglena, they’re often talking about the model species Euglena gracilis.

Euglena is unusual in the fact it’s both heterotrophic, like animals, and autotrophic, like plants. This means it is able to consume food such as green algae and amoebas by phagocytosis (engulfing cells) but they are also able to generate energy from sunlight by photosynthesis - which is perhaps the preferred method.

Euglena is a great example of secondary endosymbiosis - the phenomenon which gave eukaryotes their tiny cellular factories, including the chloroplasts which allow plants to photosynthesise. The plant chloroplast started out more than two billion years ago as a photosynthetic bacterium that got eaten by an ancient eukaryotic cell. The chloroplast continued to survive inside this ancient eukaryote and provide energy from photosynthesis. Euglena engulfed one of these cells and the same thing happened, which partly explains its diverse survival strategies. Secondary endosymbiosis is one of the many reasons we see such incredible diversity of single celled life on Earth - with organisms constantly swapping and sharing different components throughout history and still to this day.

Euglena cells are motile, propelling themselves through water using a whip-like flagellum. Interestingly, they also possess an eye-spot, which contains a rhodopsin-like protein not hugely dissimilar to the ones we use to see. The eye-spot responds to sunlight, allowing the cell to move towards it and best optimise photosynthesis.

In recent years, Euglena has been marketed as a superfood and has gained popularity in Japan for its health benefits - particularly its high nutritional value. 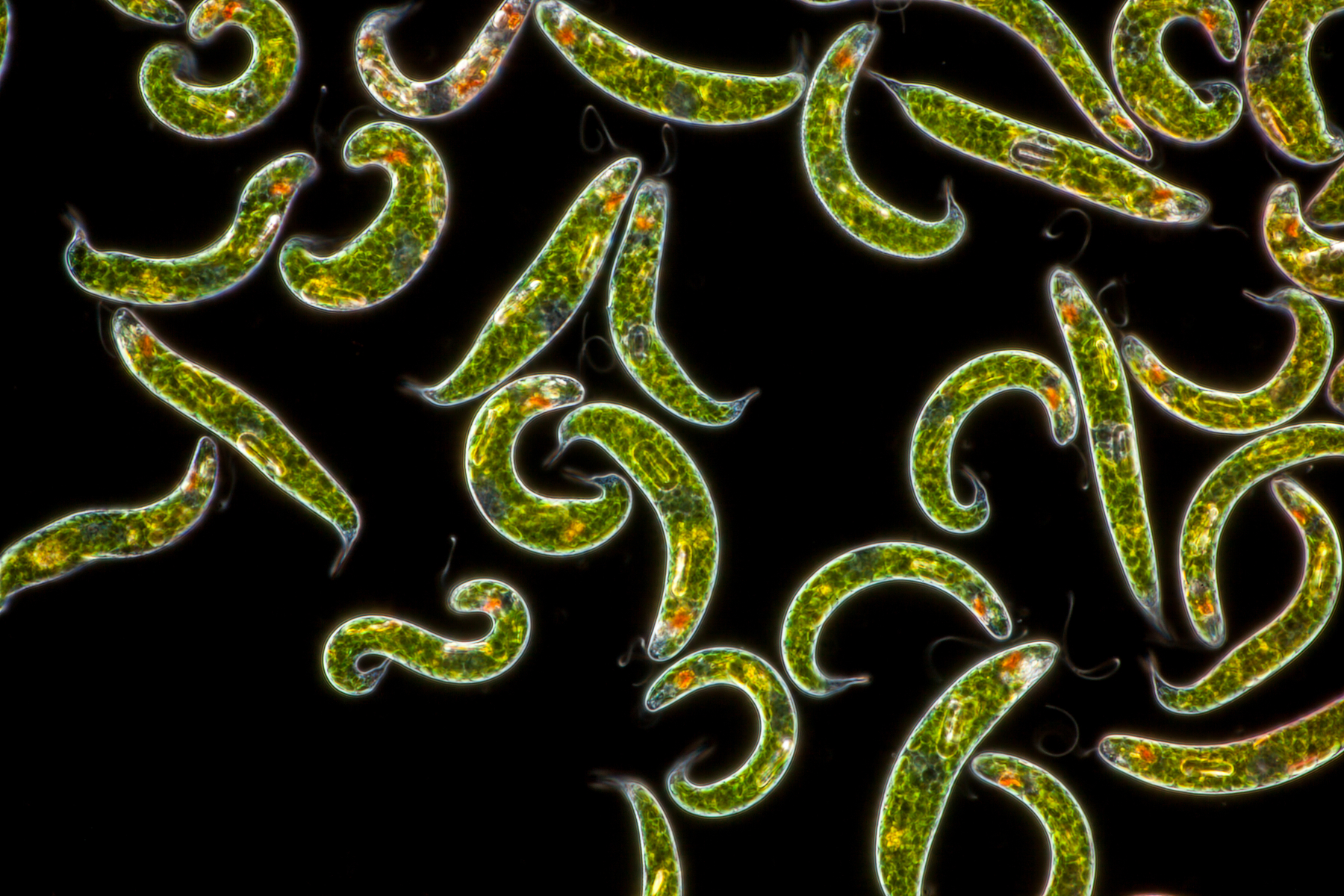 Euglena has recently experienced a resurgence in interest for its potential applications in biotechnology and its fascinating biology. The ability of Euglena to produce bioproducts is one which could have great commercial value. For example, we may be able to use its ability to synthesise sugars by photosynthesis and alter its metabolism to produce biofuel.

Another interesting aspect of this organism is its unusual evolution. Euglena belongs to a group of organisms known as the kinetoplastids, and is of further interest to study because - unlike many of the members of this group, including the trypanosome that causes African sleeping sickness - it does not cause disease. We can therefore compare the DNA of Euglena with that of similar organisms to understand the evolution of pathogens versus non-pathogens.

Another particularly interesting aspect of Euglena is its relatively complex genome. Kinetoplastids tend to carry genetic information in blocks, which is strange for eukaryotes. Actually, it’s rather more like how bacteria have their DNA arranged, and it makes it much simpler for scientists to understand what might be missing. In this way, once we have a good set of DNA sequences for organisms such as Euglena, it will be a great resource to really get to grips with studying the evolution of characteristics such as parasitism.

Our research aims to gain insight into the genetics of Euglena to support further research into its potential as a producer of biofuels.

While E. gracilis has considerable biotechnological potential and great adaptability, its use in a manufacturing sense remains hampered by the absence of a comprehensive gene catalogue and limited research on the species as a potential biofuel producer borne out of the lack of a proper genome sequence. We address this by whole genome sequencing and analysis to provide an accurate account of all of its genes to serve as a platform for future research.

It is hoped that our research on the genomics of the species will help pave the way for using E. gracilis to solve the global challenge of fossil fuel shortage and the need to create greener fuels.

Read more about biofuels and their benefits here