With our recent release of the Brassica Information Portal (BIP) – a vital, open-source tool for crop breeders and researchers worldwide – why are brassicas so brilliant, and why is the availability of BIP so important to science, agriculture, industry and us?

With our recent release of the Brassica Information Portal (BIP) – a vital, open-source tool for crop breeders and researchers worldwide – why are brassicas so brilliant, and why is the availability of BIP so important to science, agriculture, industry and us?

The genus Brassica (the mustard plants) comprises some of our most tasty and nutritious vegetables – from broccoli to turnips – as well as Norwich’s most famous condiment and industrially important oils.

These plants produce foods that are grown and eaten all over the world. Brassica oleracea lends us broccoli, cauliflower and cabbage – three incredibly popular vegetables – giving us tasty foods such as sauerkraut, kimchi and aloo gobi.

These vegetables are extremely nutritious. Broccoli, besides its clear deliciousness and delightful tree-like florets, is rich in a variety of vitamins, including thiamin (vitamin B1), riboflavin (B2) and parthonenic acid (B5), as well as important minerals such as iron, zinc, calcium, magnesium, selenium and phosphorus.

The increased awareness of the health benefits of broccoli can be further witnessed by the popularity of Beneforté broccoli – a “super broccoli” that contains much higher levels of glucoraphanin – an essential plant nutrient that helps to boost the activity of vitamin C.

Oilseed rape is another important Brassica crop, which yields industrially important oils for biodiesel production and is the third-highest produced oil crop in the world after palm oil and soybean. In Britain, oilseed rape is also the third-most economically important crop and, alongside linseed, one of only two vegetable oils grown and bottled domestically.

If this weren’t reason enough to invest in Brassica research, the small black seeds of oilseed rape provide us with a high quality and relatively healthy cooking oil.

This oil contains less harmful saturated fat than any other source – including olive oil – while retaining high levels of beneficial unsaturated fatty acids such as omega 3 – a nutrient that is as good (if not better), weight-for-weight, as our most effective commercial medicines in preventing heart disease.

The many and varied uses for Brassica plants are as interesting and diverse as their shared genetic history. Despite their widely differing appearances, broccoli, cabbages, sprouts, cauliflowers, kale, savoy, kohlrabi and kai-lan are all cultivars of just one species – Brassica oleracea.

Then there are the black and brown mustards, rapeseeds and turnips. All of these various Brassica species have an intertwined family history, with key species sharing certain genetic traits that have produced other, important plants.

Three of the Brassica species, B. nigra, B. oleracea and B. rapa, are diploid organisms, i.e. they possess 2 pairs of chromosomes, much like in humans. However, due to their genetic similarities, these species have managed to interbreed.

This has given rise to the “triangle of U” – whereby a conjugation of B. nigra (black mustard) and B. oleracea formed B. carinata (Ethiopian mustard); B. oleracea and B. rapa (turnips, chinese cabbage) turned up B. napus (swedes, oilseed rape), while crossbreeding between B. rapa and B. nigra has lent us B. juncea (brown mustard).

These interbreeding events have given rise to more complex genomes – so that B. napus, B. carinata and B. juncea are now tetraploid; they have two sets of two pairs of chromosomes from each of their precursors (see Triangle of U, below). It’s no surprise that we, therefore, see so much diversity within this interesting and incredibly useful genus of crops.

Tetraploid. One more than diploid. 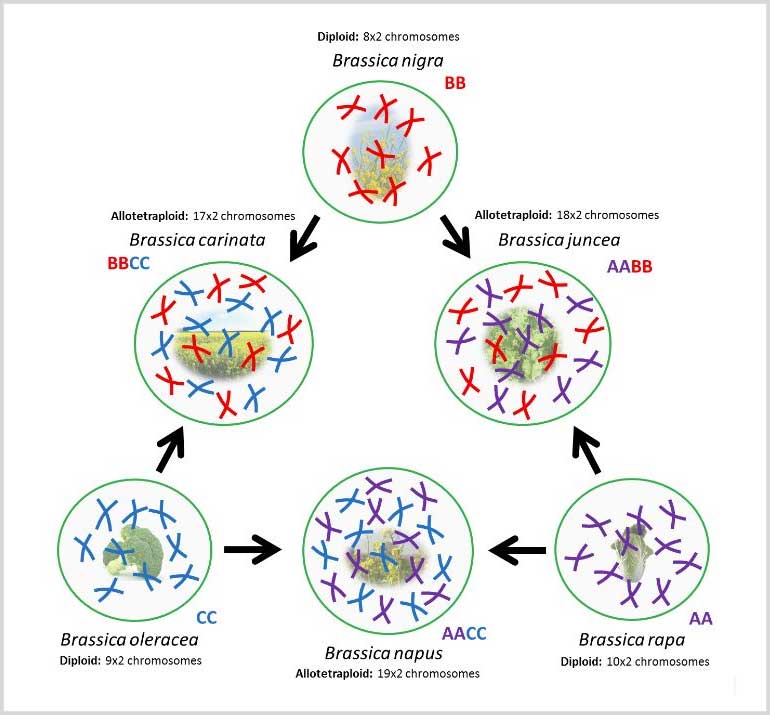 Much like the shared chromosomal ancestry of the Brassica genus, at EI, we foster a collaborative, open-source culture – providing platforms for greater access to, and sharing of, biological datasets.

The open-access Brassica Information Portal (BIP) developed at EI is a vital tool that will help not only scientists but can better inform crop breeders and industry, with vital applications that will feed down to and benefit us – the consumer.

Genetic diversity is one of the most important requirements for successful Brassica breeding. Making use of the whole spectrum of diversity, we can introduce new traits into the genetic material of traditional cultivars.

To help in this process, the BIP makes available the phenotype data of many projects. This will facilitate understanding and creation of Brassica diversity for future breeding . At its heart, the aim of BIP is to enhance Brassica crops through enabling much-improved marker assisted breeding.

Marker assisted breeding greatly enhances the efficiency of conventional breeding techniques through identifying certain regions within genomes that are associated with a specific trait, such as increased oil production or iron content.

During this process, we can detect whether such markers are present within certain crops, therefore assisting us with cross-breeding and making the selection of plants with desirable characteristics much easier.

BIP is establishing a complete database of characteristics associated with specific Brassica cultivars, allowing us to match phenotypes (traits) with genotypes (the genetic information). This will ultimately greatly enhance our ability to perform successful marker assisted breeding.

With a rapidly changing world it is more important than ever to enable good science to be done faster.

We can see that BIP is of great use for breeders – but how does it benefit the rest of us?

Our world is currently threatened by climate change. The world is undisputably heating up, rendering soils more salty and many areas more arid. Associated with climatic changes, fields that were relatively unaffected by certain pests and diseases are under attack from novel pathogens and insect species extending further from their natural range – lacking natural predators or environmental controls.

Additionally, farmers are increasingly having to limit the number of agrochemicals used for shielding crops from these attacks. The negative environmental effects of various fungicides and insecticides means that crops are even more vulnerable.

Linked to chemical usage and our industrial, intensive land use and application of fertilisers – our soils have become less fertile – with a growing dearth of fundamental plant macronutrients such as phosphate.

Nor is it just our soils that are undernourished, but our burgeoning global population still suffers significant rates of malnutrition, which is not limited to developing countries but exists in every society.

Countries such as China and India – though witnessing a broadening middle class – are still home to most of the world’s malnourished people in terms of sheer numbers. They also have the world’s highest Brassica production, therefore, improvement of these crops can have a hugely significant impact on improving food security.

What are we looking for?

BIP is particularly useful for identifying traits in diverse cultivars that can combat these combined threats to agriculture and global nutrition. The traits hosted so far enable us to target seven characteristics in particular:

1. Pest resistance – genetic elements that confer greater natural resistance in plants to pests, such as production of aromatic compounds including jasmonic acid.
2. Disease resistance – the elements coding for receptor molecules, such as R genes and associated systems, that boost a plant’s immune system in response to pathogen attack.
3. Environmental resistance – traits linked to salt and drought tolerance, for example, will help us to breed hardier crops for a changing climate.
4. Nutrient use efficiency – genetic elements that are linked to traits such as phosphorus use efficiency, nitrogen uptake or better associations with beneficial soil microbes will assist farmers in getting more for less.
5. Nutrition – Brassicas are full of beneficial iron and calcium and are one of the richest sources of beta-carotene (vitamin A). Identifying elements to increase nutrition genus-wide can therefore significantly aid in combatting malnutrition.
6. Rapeseed oil improvement – including both content of beneficial nutrients such as omega-3 fatty acid, as well as a greater abundance of oil for economically important industrial biodiesel production.
7. Added value – co-products from other parts of the plant, that historically were discarded can be relevant to industry. Breeding can selected for enhanced accumulation of such compounds such as lubricants from waste straw.

BIP presents a , curated resource of trait data for scientists with a unified naming system. Rather than having the same cultivar or trait repeated under various guises, the portal – manually curated by Annemarie Eckes of EI – brings these together, helping researchers to avoid search errors and analysis mistakes.

In the future, algorithms will be developed that will automatically check BIP in order to avoid such duplications. This allows for better comparability of all the phenotypic and genotypic information we possess about Brassica species, which allows for meta-analysis of a huge data set.

The opportunity for efficient phenotype data mining has been opened up for this nutritionally, economically and important group of crops.

Performing meta-analysis on multiple datasets hosted by the BIP, we can exploit the results of previous studies beyond their initial purpose. Furthermore, it enables us to form novel research questions, while better informing research grants and proposals.

But, more importantly, BIP is a highly valuable tool to help ‘breed’ answers to the most pressing issues facing agriculture – how we combat a changing climate while continuing to feed and nourish the planet.

By Peter Bickerton and Annemarie Eckes

Find out more about how the Portal works and the Brassica Community behind it.