We’ve reached a crucial tipping point: the fish we eat is now more likely to be farmed than fished.

We’ve reached a crucial tipping point: the fish we eat is now more likely to be farmed than fished. To meet growing global appetites, withstand climate change, and offer greater socio-economic wellbeing, freshwater aquaculture must continue to expand and adapt.

WorldFish and the Earlham Institute have joined forces to provide highly accurate and detailed genomic data for the farmed tilapia strains GIFT and Abbassa. These genetic resources will supercharge fish breeding for better feed efficiency, disease resistance, and tolerance to a changing climate.

The importance of GIFT

Tilapia is one of the most important farmed fish worldwide - in particular the Genetically Improved Farmed Tilapia (GIFT) strain developed by WorldFish in the late 1980s.

“Around 50% of tilapia farming globally comes from GIFT, or GIFT-derived fishes,” says Professor John Benzie, Flagship Leader of Sustainable Aquaculture at WorldFish. “After Chinese carp, it’s the second most-farmed freshwater fish in the world - and serves exceptional interest to Asian and African countries.”

Global tilapia production hit 6 million tonnes for the first time in 2020, highlighting the huge growth in the freshwater aquaculture industry. However, that growth is threatened by a number of factors - disease, unwanted hybridization with wild fish, and climate change.

“In the context of climate change, fresh water will become a very scarce resource,” says Dr Wilfried Haerty, Evolutionary Genomics Group Leader at the Earlham Institute. “We need to make sure that freshwater aquaculture can still thrive in these changing conditions.”

If freshwater aquaculture is to keep pace with a rapidly changing climate, breeding programmes must accelerate to meet the demand.

“We’ve very successfully selected for growth in GIFT over the last twenty years,” says Benzie, “and we want to extend that to resilience traits such as feed efficiency, disease resistance, and oxygen efficiency, which is related to climate change. But resilience traits are difficult to work with and, because of that, we need molecular tools to assist with that process.”

With Tilapia being one of the most important farmed fish worldwide, freshwater aquaculture must continue to expand and adapt. 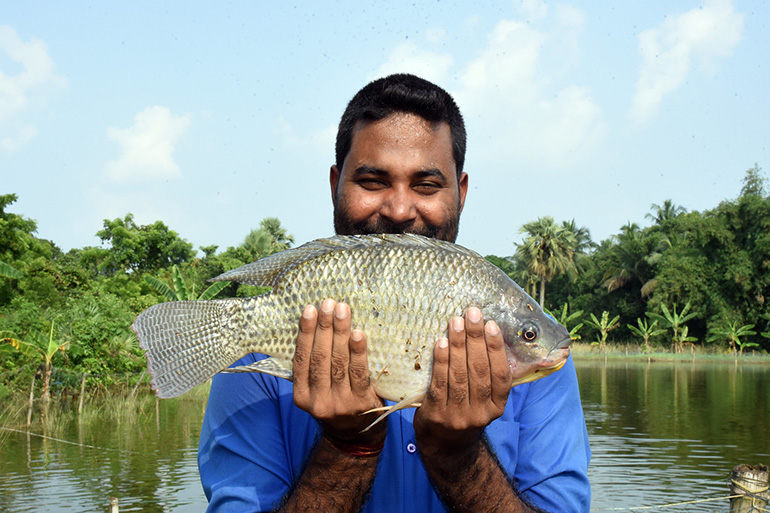 New genomes ensure the GIFT can keep on giving

That’s why WorldFish and the Earlham Institute embarked on a collaboration under the CGIAR Research Program on Fish Agri-Food Systems (FISH), supported also by UKRI-BBSRC, to improve the genetic resources available for breeding GIFT, including two new genome sequences - the entire DNA complement of both GIFT and another important farmed tilapia breed, Abbassa.

“A genome gives us a physical map of the DNA, as well as the statistical estimates of the relationships between genes spatially on that map,” Benzie explains. “Having those two things provides us with a very useful tool to be able to identify where in the chromosomes the particular genes are that are controlling the traits of interest.”

At the Earlham Institute, Head of Genomics Pipelines Karim Gharbi, whose team generated the new tilapia data, likens the art of genome sequencing to cooking, with technologies complementing each other “like ingredients going into a recipe.”

Combining all of the latest platforms, the resulting dish - or genome assembly in this case, which happens when computational biologists piece together fragments of DNA sequences obtained from the sequencing process - could be considered among the Michelin Star category.

“In terms of the assembly statistics, it looks extremely good,” says Haerty, whose team led the genome assembly work. The current assembly has an N50 of about 26Mb, and comprises 364 scaffolds in total.

“Because of the technologies applied we should be able to further improve this assembly to chromosome length scaffolds and provide an assembly of even better quality than the current reference. It's very exciting, because it opens up a lot of possible work with WorldFish on the future of these strains.”

In the context of climate change, freshwater will become a very scarce resource, we need to make sure that freshwater aquaculture can still thrive in these changing conditions.

The power of a genome

The power of having such a complete and detailed genome is already paying dividends. The GIFT strain is a hybrid between several different Nile tilapia strains, as well as another species known as Oreochromis mossambicus.

“We can now look at integration in this GIFT strain - how much of the mossambicus genome is in there,” explains Earlham Institute’s Dr Graham Etherington, who assembled the GIFT genome. “With that you can identify genes that are associated with growth, or your other traits of interest, and see which strain that part of the genome is from.”

It’s a similar story for Abbassa, too - another hybrid (between the Nile tilapia and Oreochromis aureus - a cold tolerant species) that has the power to transport tropical fish production to regions with more variable temperature extremes.

“There are specific programmes in China where aureus is deliberately mated with niloticus, to produce a production strain that's well suited for colder climates in northern China,” says Benzie. “Both of these genome sequences will be providing novel information on the nature and extent of hybridization.”

By comparing the genomes of multiple fishes in this way, we have a much more powerful tool on which to call upon to introduce beneficial, resilient characteristics.

“This is why the GIFT genome sequence is going to be so important,” says Benzie. “We can identify resilient characteristics in the GIFT strain that have been introduced as a result of that hybridization.”

It's a fish on which a lot of smallholder farmers in Africa rely. It's one of the best opportunities to be able to improve productivity, reduce environmental impact, and gain better livelihoods.

For WorldFish and the Earlham Institute, the importance of the partnership to unlock doors from both a scientific and an impact perspective is clear.

“We have the physical fish, we have the presence in a number of developing countries and knowledge of the farming systems, and Earlham has the capability for rapid, effective, and accurate sequencing of genomes, building on their strengths of doing that for crops,” says Benzie.

“We can begin to pick up the genes that are particularly important for domesticated strains and be able to start looking to the future.

“Tilapia is hardy by nature, and we are trying to make it even hardier,” Benzie concludes. “It's a fish on which a lot of smallholder farmers in Africa rely. It's one of the best opportunities to be able to improve productivity, reduce environmental impact, and gain better livelihoods.”

Haerty, who is excited to get to work applying the new genomes to several new avenues of research - including another exciting collaboration with WorldFish known as TrueFish - agrees.

“WorldFish is an incredible success story in terms of working with developing countries,” he explains. “They’re very focused on the impact of the work, how the work we are doing - those new strains that are being generated - will impact the livelihood of farmers. In terms of socioeconomic impact, it can be huge.”