I met Keira Havens at the Thought for Food Global Summit in Lisbon, 2015, where I was delighted with my decision to attend her workshop on synthetic biology and colour changing flowers. This workshop not only opened my eyes to the world of synbio startups - the ideas that Keira put across inspired a swathe of public engagement events, one of which saw Earlham Institute and Thought for Food team up at WIRED: Next Generation for a workshop on Biohacking.

I asked Keira about her journey into synthetic biology via the United States Air Force, her drive to connect the public to GMOs via Revolution Bioengineering and color changing flowers, and all about her new role at company PivotBio, who have an elegant, synbio, microbe-based, clean fertilizer solution.

Keria Havens leading a workshop at the 2016 Thought for Food Global Summit in Zurich. 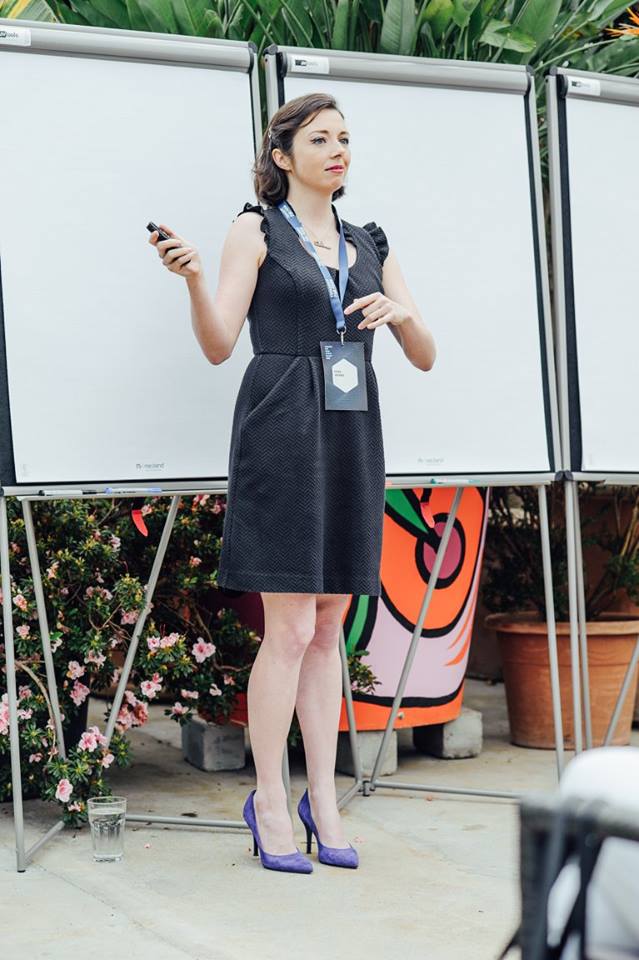 Hi Keira! When we met at Thought for Food in Lisbon, you inspired me with your workshop on colour changing flowers. What inspired you to start doing this?

It started when I realized that the work I did in the lab was completely unrelated to the way people outside of the lab understood science. I wanted to get into that gap, to explore it and see where the edges were.

There were two incidents that really brought home how distant those two worlds were for me. The first happened on a trip back home when I visited my best friend’s parents. They asked what I did and I - very excited and very naive - tried to share the amazing thing that is molecular biology with them. It turned out to be completely irrelevant to their day to day life. They were kind of course, but coming face to face with that sort of disconnect shook me out of a rather narrow definition of “important”.

The second happened in academia and was a catalyst for the color changing flower project in particular. I was a scientist investigating the way organisms respond to their environment. The team was genetically engineering plants to be able to share what they sensed with us in a very simple, visible way. No getting around it - these plants were genetically modified organisms (GMOs) through and through. The project got a little bit of publicity, and we expected negative reactions. But instead we heard “I hate GMOs but I like these plants”.

It became really clear that “GMOs” meant something to the general public that it did not mean to me as a scientist. I began to think that with a few exceptions, people found the term “GMO” incompatible with utility - they didn’t see any benefit to it. So my cofounder and I set out to challenge that notion and make a beautiful GMO: The color changing flowers.

How did you go about starting Revolution Bioengineering?

We were both working in an academic lab at the time so we first made sure to wall off our exploratory startup work from our day jobs. We initially thought that we could work as a contract biological research org within the university, helping computational folks execute experimental prototcols and bringing the world of computational modeling and the messy reality of the wetlab a little closer together. This wasn’t an option in the long run - not enough money to it to make it viable. So in our spare time we started reading extensively, looking for a project that we could build on our own that would be viable for the consumer. We picked a name, put up a little of our own cash, and rejected a lot of ideas before we ended up with color changing flowers

Do you have any tips for someone thinking of launching their own company? What are the hurdles?

I’m thinking specifically of technological startups here, and I think it’s important to note that there are many start up business models out there. I’d ask that folks who are considering this path take some time and question what it is that they want to do and why.

The urge to make a tangible difference in the world can be really strong, but technology is only one tool. Sometimes the best solution to a problem is not technological but legal or logistical or political. Sometimes you can be more impactful by joining another effort (and you’ll almost certainly be better compensated), sometimes you might be asking a question that a non-profit can do a better job of answering.

Remember that a business is its own entity and the product is just a tiny part of that. In any case, do as much as you can on your own before you go looking for outside money and be very selective when you do - the folks with the cash have their own agendas and you need to make sure that you are aligned with them.

Also, build up that mental support system - you’re about to step outside the system in a number of fundamental ways and you’re going to need people that you can talk about failure and the future with.

You’re a fan of bio and a fan of beauty, how is your work breaking misconceptions around biological engineering?

As we weren’t funded, and no one has ever grown the flowers, it’s hard to say exactly what the impact has been for the rest of the world. However, I’ve notice an increase in recent years embracing the human aspect of science. The stories around the technology have begun to focus more on impact and benefit instead of technological excellence or feats of engineering. I wanted the color changing flower to give people a fresh start in this conversation about biotechnology, but it has, at the very least, allowed me to lend my voice to that conversation. The Frankfurt TEDx Talk has been seen something like 50K times now, and I hope that it inspires people to think beyond their work at the bench and preconceived notions of science and what it can do for us.

I am excited about those applications of biology which allow us to do more in all dimensions, the ones that do not force a trade-off between human benefit, economic benefit, and environmental benefit.

What sort of synthetic biology applications do you foresee will change our world for the better?

I imagine that in the future “synthetic biology,” as a tool for in depth exploration of living systems, will remain a mainstay of the lab, and a new field of ‘applied biology’ will begin to take hold, just as applied chemistry is intended to answer a specific question or solve a real-world problem. It’s my opinion that only those biological applications that work hand in hand with the human systems they seek to improve will have the intended impact.

Technology does not develop in a vacuum and we need to be aware that the things we make reflect who we are and what we expect the world to look like. I am excited about those applications of biology which allow us to do more in all dimensions, the ones that do not force a trade-off between human benefit, economic benefit, and environmental benefit. It’s an exciting time because we’re starting to see these applications come to the forefront now.

You’ve landed a job at Pivot Bio, what are you doing there? What’s their ambition?

Pivot Bio is a company with a biological application that will make a huge difference.

They’ve approached a substantial, intractable problem in agriculture with an elegant solution that works with an existing system while having the potential to fundamentally shift the way we grow crops. I am thrilled to be part of a team that’s working toward a cleaner, more natural fertilizer for cereal crops that also has the potential to help make our air and water cleaner.

Farmers today use synthetic nitrogen fertilizer produced by the Haber Bosch process. This fertilizer is cheap and easy to apply, but making it takes up 1% of the global energy supply, and only 50% of it ends up in the plant. The rest leaches out into our waterways and volatilizes into the air, polluting the environment at an estimated cost of $150 billion USD in human health and economic impacts.

Pivot Bio has developed a microbe that will produce nitrogen for non-legume row-crops in fertilized field conditions. Biology has a few advantages over chemistry here. First, nitrogen producing microbes live on the root, producing nitrogen right where it is needed. This precision delivery means that there is no excess nitrogen that could cause water and air pollution. Second, the nitrogen produced is highly accessible - plants like what the microbes are making. Third, a biological nitrogen source grows with the plant over time, meeting the needs of the crop as it sprouts, matures, and sets grain.

It’s more than a cool technology - it also works with the existing agricultural system. Pivot Bio’s microbes supplement synthetic nitrogen fertilizer, enabling farmers to use less. As nitrogen producing microbes become trusted tools, more farmers will adopt them, further reducing the use of synthetic nitrogen fertilizer. The next generation of microbes has the potential to replace even more fertilizer, with the goal of eventually making biology the cornerstone of the crop nutrition industry.

You have had an interesting route in science (via the air force!). How did you get to where you are now, and what have been the biggest lessons you have learned on the way?

Yes, my resume is something else at this point! I always loved science, but after I completed my undergraduate degree, the Air Force put me (& a surprising number of other biologists) to work with nuclear weapons instead. It sounds a bit cheesy, but I find myself coming back to the core values all the time: integrity first, service before self, and excellence in all we do. If I’m working on those things, regardless of what surprising turn my career has taken, I’m moving in the right direction.

On a more practical note, I would urge people to create. Write as much as you can, record your thoughts in any way possible. You will go back to them again and again and share them with others. It helps you to find the common threads in your life, those things that you want to catch hold of and grow.