Scientists identify the candidate genes that may be essential to apomixis, the formation of asexual seeds in plants; accelerating the breeding of vital forage crops for animal nutrition in Africa and Latin America.

Plants can reproduce clonally by apomixis, i.e. do not require egg cells to be by a male sperm or pollen grain. As result, the progeny (genetic descendants) are clones from the mother plant. The study, led by CIAT in collaboration with the Earlham Institute and Yale University, highlights genetic elements that could be key to identifying plants that undergo this biological phenomenon.

A molecular diagnosis for reproduction enables quicker selection of the Brachiaria hybrid plants. The Brachiaria breeding at CIAT produces hybrids that segregate for reproductive mode, i.e. approximately half of the progeny in each generation are sexual and the other half are apomictic (asexual seed formation).

Apomictic plants reproduce asexually by seed and as a consequence are clones of the female progenitor. This trait is useful to propagate plants with superior traits, but it is also a barrier for efficient breeding. Therefore, the sexual plants are maintained in the breeding programme to produce the next generation.

Efficient and reliable discrimination between apomictic and sexual offspring is fundamental to Brachiaria breeding because apomictic plants that reproduce by apomixis can be released as true-breeding cultivars.

By identifying candidate genes and genome regions linked to apomixis, this study opens the door to the use of molecular markers to efficiently select apomictic or sexual plants, a technique called marker-assisted selection (MAS).

Apomixis is found in several tropical forage species (Pennisetum, Panicum, Paspalum), which may allow scientists to extend these results to other important species important to small livestock holders in tropical Africa and America.

By identifying candidate genes and genome regions linked to apomixis, this study opens the door to the use of molecular markers to efficiently select apomictic or sexual plants, a technique called marked assisted selection (MAS).

Based on evidence from other plant species, the research focuses on a specific set of genes in Brachiaria, the ASGR-BABY BOOM-like (ASGR-BBML) genes. These genes were previously discovered in the related grass genera Pennisetum and Cenchrus. A marker within one of the candidate genes was shown to be present in apomictic progeny and absent in sexual progeny.

From these findings, the team of scientists have produced a genetic map for Brachiaria and located the genetic region controlling apomixis. This allows the scientists to design genomic markers to directly detect clones - aiding breeders.

Project lead at EI, Dr Jose de Vega, said: “It is of paramount importance that plant breeders can produce high-yielding, healthy plants that are tolerant to a suite of different conditions. Similarly, it is important that farmers are able to effectively grow exactly these plants. Having sexual and apomictic offspring allows to distribute clonal copies of the elite lines, and maintain the breeding programme.

“However, for the breeders, selecting superior crops can be both time-consuming and expensive. Marker assisted selection of a trait so important as mode is fundamental to accelerating breeding programmes.

Livestock farmers in the district of Lushoto, in the Tanga region of Tanzania, are finding ways of boosting their production and lowering their environmental impact by planting improved forages for higher nutritional livestock feed. Credit: Georgina Smith / CIAT 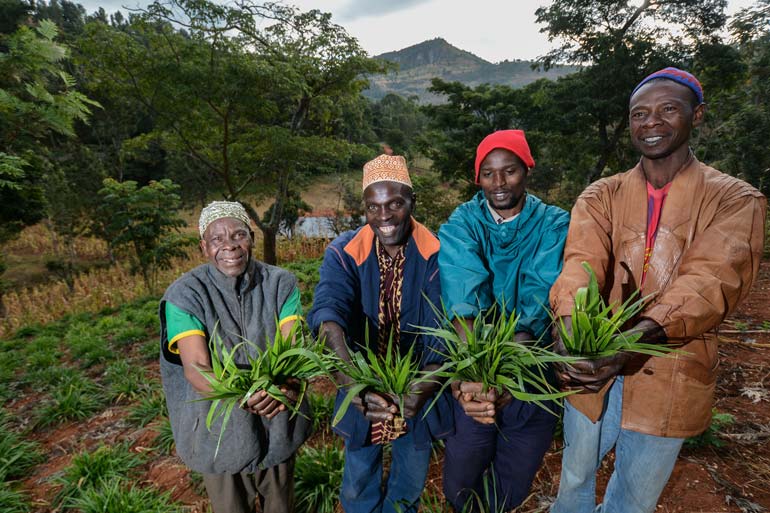 The research has also found that primers specific for ASGR-BBML genes anneal in this genetic region controlling apomixis, which could allow detection of plants that are apomictic not only in Brachiaria but in other important tropical forages.

The genetic maps generated for Brachiaria will allow future researchers to locate other important traits, including fertility and yield, in addition to allowing breeders to use accurate marker-assisted selection.

Dr de Vega, added: “This research has paved the way for breeders to identify apomictic or sexual plants at the seedling stage within just a few weeks - rather than years. Furthermore, this technique can hopefully be applied to other economically important crops going forwards - allowing us to rapidly improve and accelerate crop breeding in response to the pressures of a changing climate and the increasing burden of an expanding global population.”

The scientific paper is published in Genetics, titled: “A Parthenogenesis Gene Candidate and Evidence for Segmental Allopolyploidy in Apomictic Brachiaria ”. This research builds on the Earlham Institute's Brachiaria research with partners in the UK, and Kenya.