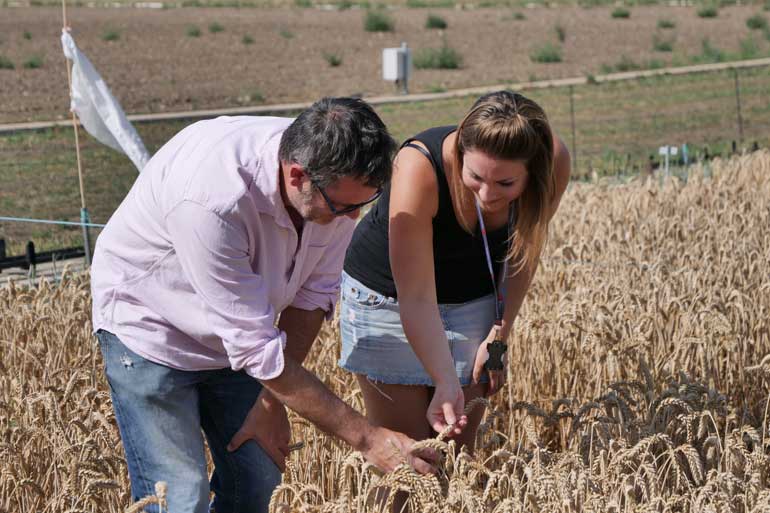 Published in Genome Research, based on a novel method developed by Earlham Institute, UK, an international research team have uncovered the hidden genetic secrets that give wheat its remarkable ability for local adaptation - revealing a previously untapped resource for breeding better, more resilient wheat.

Globally, wheat, together with maize and rice, provides the most human nutrition. It can thrive in a whole range of different environments, even within a similar geographical region.

Exploring one hundred different wheat lines worldwide, the research team led by the Earlham Institute in collaboration with Helmholtz Zentrum München, University of Liverpool and the John Innes Centre have revealed a trove of epigenetic variation that was previously unknown to current genotyping methods.

The new findings link crop evolution and phenotypic change to agricultural conditions - allowing us to protect future yields with a climate resistant armour through new breeding methods - contributing to the success of this global crop as well as significant implications for the wheat community.

With DNA, it’s not always about the sequence of As, Ts, Gs and Cs. Although they contain the vital code that lets us make proteins, there are many other aspects to a genome than just the gene sequences.

One aspect is epigenetics - changes in how genes are expressed. Extra to the DNA sequence, the individual letters might come attached with a ‘methyl group’. Methylation is very important because it means that genes can be turned off, or the way DNA is stored can change, changing the way genetic information is read.

This is important because these changes can happen due to the environment, but are still inherited. This means, in certain conditions, if an epigenetic change happens that is beneficial, this can be passed on to the next generation.

The research team found geographical patterns in these epigenetic changes between the 100 landraces of wheat studied, which suggests that these changes have arisen due to environmental conditions in those local areas.

This is exciting because it means that breeders have a hidden tool up their wheat sleeve. Currently, it’s all about SNPs - single changes in a DNA sequence that have an effect on disease or environmental resistance, for example. Now, even if the DNA sequence is the same, there might be subtle changes at the epigenetic level that we can use to improve how plants respond to local conditions.

Essentially, there are more tools to enable farmers to keep on growing the best possible crop for their local environment.

Group Leader Professor Anthony Hall at the Earlham institute, says: “We are very proud of our groundbreaking piece of fundamental work indicating that DNA methylation offers a broad and stable source of variation for wheat breeders.

“Our next step is to translate this fundamental work on DNA methylation to a technology that is transformative, relevant and accessible to wheat breeders for the development of new cultivars.”

Dr Laura-Jayne Gardiner, Senior Postdoctoral Scientist, added: “What is really neat is, even though we are working with a hugely complex genome which is five times the size of the human genome, we’re able to translate this discovery into a tool for breeders likely to be just a few years. As a scientist, it's incredibly exciting that your research could have such an immediate impact.”

The published paper “Hidden variation in polyploid wheat drives local adaptation” in Genome Research describes a landmark piece of research of broad interest. We demonstrate that there is massive untapped diversity in the large complex hexaploid genome of bread wheat, in methylation and transposon expansion that is invisible to current genotyping methods. We correlate this with phenotypic change and genome evolution. This has important implications for wheat researchers, breeders, geneticists, plant scientists and biologists.

• Subsets of stable and variable methylation

• Local environment drives methylations patterns for adaptation, and we link this to phenotype

Likely to be a seminal paper in understanding variation in wheat as well as in understanding evolution and genome regulation in polyploids more generally. This opens the door for a whole series of important biological questions about the role of epigenetics in the domestication and adaptation of crops. Not only are these important scientific questions, additionally, we provide evidence for a huge level of untapped variation for crop breeders and the scientific community to exploit. Finally, the underlying data, for which we have already received a large number of requests for access to, will become an important resource for biologists; alongside the release of the raw sequencing data we are currently making the SNPs and methylation sites easily accessible via the Ensembl wheat genome browser.