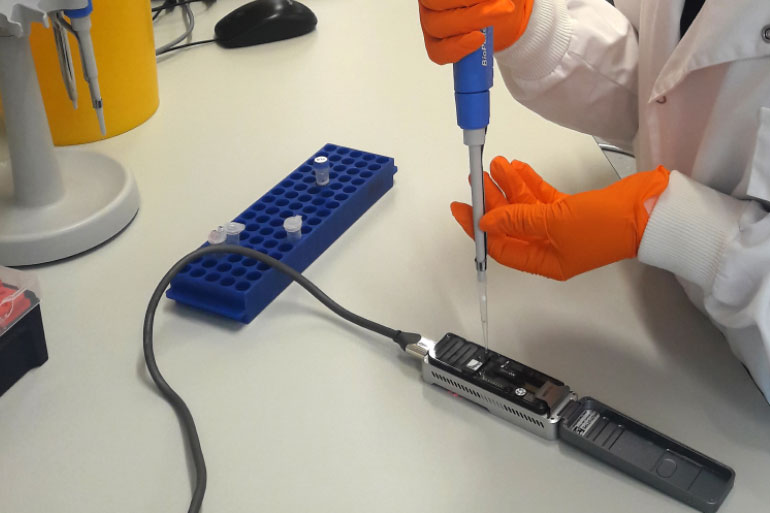 Published in the journal Nature Biotechnology, scientists at the Quadram Institute, University of East Anglia (UEA) and Earlham Institute (EI) have developed a new, rapid way of diagnosing bacterial lower respiratory tract infections in hours rather than days that could improve patient care and slow the spread of antimicrobial resistance.

Lower respiratory infections, such as pneumonia, account for around three million deaths worldwide each year. Current diagnostic methods rely on growing bacteria from patient samples, but this takes two to three days and may still not identify the cause.

Dr Justin O’Grady and his team have successfully developed a clinical metagenomics test (genomic analysis of multiple organisms obtained from a single sample) to precisely identify the bacterial causes of lower respiratory infections within six hours. It can also determine if the pathogens are resistant to any of the antibiotics used to treat these infections.

This allows rapid treatment with targeted antibiotics, resulting in improved patient outcomes while reducing the use of broad-spectrum antibiotics and helping in the fight against antimicrobial resistance.

“Clinical metagenomics has the promise to revolutionise the diagnosis of infectious diseases, and our study describes the first rapid affordable and accurate clinical metagenomic test that could readily be used on a routine basis in a clinical setting,” said Dr O’Grady, a Group Leader at the Quadram Institute and Associate Professor at UEA.

The study overcomes some of the hurdles that have, to date, held back the widespread deployment of clinical metagenomics. The new method incorporates a step that rapidly and efficiently removes human genetic material from the sample provided by the patient, thereby leaving mainly pathogen DNA for sequencing.

“Respiratory samples are difficult to work with because they are mainly comprised of human genetic material. Removing this makes detecting the pathogens easier and reduces the sequencing cost and time,” said Themoula Charalampous, a researcher in the Leggett Group at EI on the study.

Dr Richard Leggett on Themoula’s supervisory team, said: “We worked with Themoula, Justin and the team on developing the bioinformatics analysis approaches used in this work. Nanopore sequencing is an extremely attractive technology for clinical diagnostics and this work is one of a number of scenarios in which we are trialling the technology at EI.”

The researchers used Oxford Nanopore’s portable MinION sequencing device to facilitate real-time sequencing, data generation and analysis. This helped reduce time-to-result from days to hours. The portability of this sequencing device means that it could be used closer to the patient, reducing the time spent sending samples to a central laboratory.

The pilot method was tested on 40 samples from patients with suspected lower respiratory infections. The team then refined the test to improve its sensitivity and reduce the time from sample to result to six hours and tested on a further 41 respiratory samples.

“The pipeline that we’ve developed in this study produces data that can be used not only for clinical diagnostics but for public health applications such as outbreak detection and hospital infection control,” said Dr Gemma Kay.

The protocol is now being assessed in a larger multi-site clinical trial to evaluate its performance for the diagnosis of hospital-acquired pneumonia.

The new method was developed with colleagues on the Norwich Research Park, at the Norfolk and Norwich University Hospital. Funding for the study came from the Biotechnology and Biological Sciences Research Council, the Medical Research Council and the National Institute for Health Research.