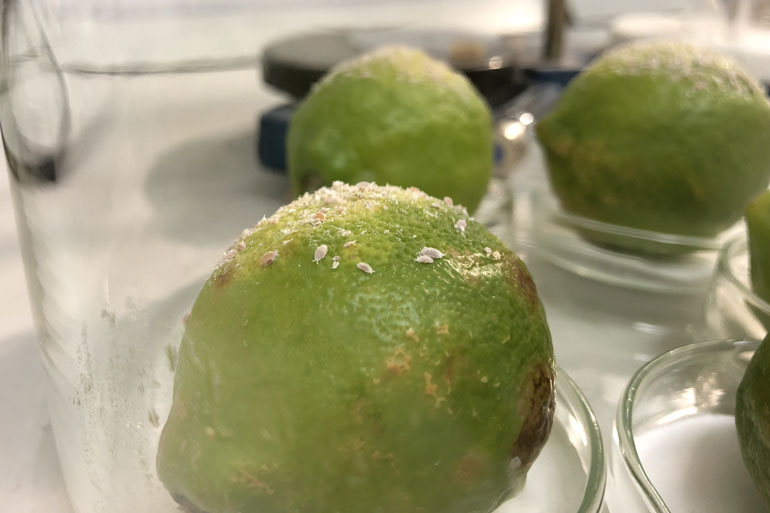 The project will use a biological method for manufacturing pheromones, which provide a safe and sustainable alternative to harmful pesticides, reducing the environmental impact of agriculture.

Estimated to reach nearly 17.5 billion by 2022, the cost of treating crops is growing at a rapid rate. Due to climate change, insect pests are on the rise - costing the US agriculture sector up to $700 million annually and resulting in up to 80% crop yield damage.

Some of the most aggressive pests of agriculture are insect larvae. Semiochemicals are emitted by insects for communication. The most widely known of these are sex pheromones, produced by virgin females to attract mates of the same species.

In project , the team of European scientists aim to use synthetic biology to produce insect sex pheromones in plants and fungi, building on the success of the Polytechnic University of Valencia’s entry into the 2014 iGEM competition with project “SexyPlant" in which they produced insect sex-pheromones in plants.

Improving on the initial proof-of-concept, the new research will identify and validate key biosynthetic enzymes for the bioproduction of the superfamily insect group Coccoidea (scale insects and mealybugs) pheromones.

The biologically-produced pheromones can be used to control insect pests that affect agriculture and horticulture.

“The use of sex pheromones for pest control is already known to be feasible, but for many species, the manufacturing is difficult and expensive. Bioengineering can provide viable alternatives to manufacturing, expanding the use of pheromones that will be much kinder to our environment.”

Dispensing sex pheromones in plant production environments is used to disrupt mating in the target insect species and prevent breeding, thereby providing a highly species-specific control method. This presents a sustainable alternative to conventional pesticides, the use of which is progressively being restricted due to concerns about their non-specificity and negative impacts on biodiversity.

The project will demonstrate that biosynthesis can provide a sustainable, low-cost manufacturing platform for the commercial production of insect pheromones and reduce the production cost of pheromones that are currently commercially non-viable.

Insect sex pheromones are already used as a pest-control strategy. However, chemical synthesis is currently the only approach for manufacturing and the use of toxic ingredients is inevitable. Furthermore, the unusual chemical characteristics of many insect pheromones mean that synthesis is not cost-effective.

Dr Diego Orzaez, who will present the project at ACHEMA, The World Forum and Leading Show for the Process Industries, in Frankfurt, added: “With an ever-growing global human population, increasing agricultural production through prevention of crop losses to pests has the potential for enormous economic and social impact. We estimate that the bio-manufacturing is an excellent opportunity to expand the pheromone market, contributing to reducing the global costs of integrated pest management programmes.”

image shows: Collecting pheromones from colonies of citrus mealybugs at the Centre for Chemical Ecology, Polytechnic University of Valencia, Spain

The total use of insecticides in the EU has risen to over three tons per year. Agricultural losses due to arthropods (invertebrate animals) are estimated to be 18–26% of total crop production worldwide, equivalent to 470 billion US dollars per year, with major losses occurring in developing countries.

SUSPHIRE’s biotechnological approach could overcome current limitations in pheromone production and establish Europe at the forefront; as well as reinforcing EU leadership in plant synthetic biology. EU groups are pioneering the design of genetic circuits and the use of programmable DNA binding proteins in plants for the development of non-food plant crops for bioproduction of high-value products.

Participation in at the Earlham Institute (EI) is funded through a grant from the Biotechnology and Biological Science Research Council (BBSRC), UK.

EI offers a state of the art DNA sequencing facility, unique by its operation of multiple complementary technologies for data generation. The Institute is a UK hub for innovative through research, analysis and interpretation of multiple, complex data sets. It hosts one of the largest computing hardware facilities dedicated to life science research in Europe. It is also actively involved in developing novel platforms to provide access to computational tools and processing capacity for multiple academic and industrial users and promoting applications of computational Bioscience. Additionally, the Institute offers a training programme through courses and workshops, and an outreach programme targeting key stakeholders, and wider public audiences through dialogue and science communication activities.

The mission of the EI is tackling global challenges through life science research. EI's research brings together a wealth of expertise in biosciences, bioinformatics, high-performance computing and biotechnology to understand complex biological systems in plants and animals and their interaction with the environment.

EI is supported by UK Research and Innovation Councils to ensure that biological science in the UK has access to a skill base in genomics technologies and bioinformatics to deliver programmes leading to improved food security, advances in industrial biotechnology and improved human health and wellbeing.

The institute is located on the Norwich Research Park (NRP) and also houses the Earlham DNA Foundry for accelerating progress in synthetic biology.

The Institute for Plant Molecular and Cellular Biology (IBMCP) "Eduardo Primo Yúfera" is a research funded by both the Polytechnic University of Valencia (UPV) and the Spanish Research Council (CSIC). IBMCP’s mission is to generate knowledge that can be used to engineer plants with better productivity and fruit or with added value (both for consumers and food industries). We are also striving to generate crop plants that are more resistant to stress (less dependent on chemical treatments), in order to contribute to more sustainable agriculture.

The is located at the Polytechnic City of Innovation (CPI) at the UPV and includes 7000 m2 of research labs and core services. It also includes 4150 m2 of greenhouses and plant growth chambers.

The Institute of Agrochemistry and Food Technology (IATA) is a centre of the CSIC. Its scientific-technical objective is to carry out research of excellence the production of sustainable and quality food, taking into account its safety, health impact and consumer acceptance.

Participation in at IBMCP and IATA is funded through a grant from Ministry of Economy and Competitiveness (MINECO), Spain.

The Technische Universität (TU) Darmstadt is one of Germany’s leading technical universities. TU Darmstadt incorporates diverse science cultures to create its characteristic profile. The focus is set on engineering and natural sciences, which cooperate closely with outstanding humanities and social sciences. We are enjoying a worldwide reputation for excellent research in our highly-relevant, focused profile areas: cybersecurity, internet and digitalisation, nuclear physics, fluid dynamics and heat- and mass transfer, energy systems and new materials for product innovation. We dynamically develop our portfolio of research and teaching, innovation and transfer, in order to continue opening up important opportunities for the future of society. Our 312 professors, 4,450 scientific and administrative employees and close to 26,000 students devote their talents and best efforts to this goal. Together with Goethe University Frankfurt and Johannes Gutenberg University Mainz, TU Darmstadt has formed the strategic Rhine-Main Universities alliance.

Participation in at TU is funded through a grant from the German Federal Ministry of Education and Research; Bundesministerium für Bildung und Forschung (BMBF).

With about 120 employees, NIB is the largest independent Public Research Institution for Life Sciences in Slovenia. The Institute was established by the Government of the Republic of Slovenia in 1960. The basic activity of the Institute has been and continues to be basic, developmental and applicative research in the fields of biotechnology, biophysics, biomedicine and system biology. The numerous activities taking place at the NIB are related to the environment, agriculture, food and, more recently and increasingly so, to human health. Participation in at NIB is funded through a grant from Ministry of Education, Science and Sport of of Slovenia.

EPA is a Spanish technology-based company dedicated to the development and manufacture of phytosanitary products based on techniques of pest control. Located in the Valencian Community and with a 100% Spanish and Valencian, EPA manufactures all of its products exclusively in facilities located in territory through its own technology generated in Valencian and Spanish research , with which it collaborates permanently.

Participation in at EPA is funded through a grant from the Centre for the Development of Industrial Technology (CDTI), Spain.