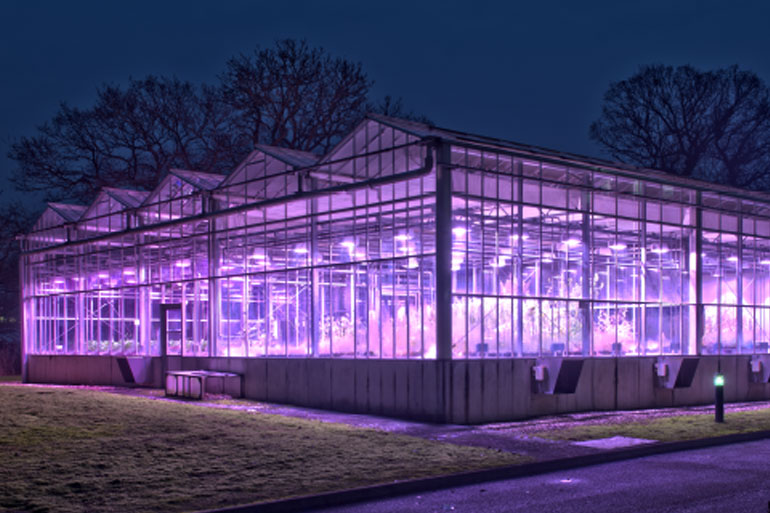 Technology first used by NASA to grow plants extra-terrestrially is fast-tracking improvements in a range of crops.

Scientists at the John Innes Centre, Earlham Institute, and Quadram Institute in Norwich, UK, and the University of Queensland have improved the technique, known as speed breeding, adapting it to work in vast glass houses and in scaled-down desktop growth chambers.

The ability to work at these scales gives scientists greater opportunities than ever before to breed disease resistant, climate resilient and nutritious crops to feed a growing global population. The research is published in the journal Nature Protocols.

Speed breeding uses enhanced LED lighting and day-long regimes of up to 22 hours to optimise photosynthesis and promote rapid growth of crops. It speeds up the breeding cycle of plants: for example, six generations of wheat can be grown per year, compared to two generations using traditional breeding methods.

By shortening breeding cycles, the method allows scientists and plant breeders to fast-track genetic improvements such as yield gain, disease resistance and climate resilience in a range of crops such as wheat, barley, oilseed rape and pea.

Being able to do this in a compact desktop chamber enables affordable, cutting-edge research on a range of crops to take place before the experiments are scaled up to larger glass houses.

The latest advances come at a crucial time for European crop development. They follow a decision this summer by the Court of Justice of the European Union which ruled that crops improved using modern gene-editing techniques should be classed as genetically modified organisms.

The decision was greeted with dismay among many leading plant scientists, breeders and farming industry leaders in the because it frustrates efforts to meet the challenge of a growing world population.

Dr Brande Wulff, a wheat scientist at the John Innes Centre and one of the lead authors on the paper, explains that European crop research and breeding will become more dependent on speed breeding in the light of these developments.

“Speed breeding allows researchers to rabidly mobilise the genetic variation found in wild relatives of crops and introduce it into elite varieties that can be grown by farmers. The EU ruling that heavily regulates gene editing means we are more reliant on speed breeding to grow sturdier, more resilient crops.”

Dr Wulff’s team at the John Innes Centre has developed techniques such as rapid gene discovery and cloning that, alongside speed breeding, would allow crop improvements via a non-GM route.

Collaborators in Australia - currently experiencing one of the worst droughts on record - are using the technology to rapidly cycle genetic improvements to make crops more drought resilient.

Dr Wulff predicts the speed breeding technology will become the norm in research institutes:  “We know that more and more institutes across the world will be adopting this technology and by sharing these protocols we are providing a pathway for accelerating crop research.”

The refinements, outlined in this study, aim to optimise the technology as a research tool. Changes to soil/media composition, lighting, temperature, of plants and premature seed harvest have led to the team cutting down the seed-to-seed generation time in wheat to just eight weeks.

Sreya Ghosh, first author on the paper, from the John Innes Centre, highlights the benefit of making the technology accessible to more research communities.

“A lot of researchers want to speed up their crop breeding but do not have access to state-of-the-art growth chambers or large glasshouses. It was important to us that we develop something that could be bought quickly and set up with minimum skill.

“This scaled down growth cabinet means the technology is accessible and democratic. Researchers all over the world can set it up on their desk to get the benefits of speed breeding for their research programme.”

Scientific computing specialist and co-author on the paper Luis Yanes from Earlham Institute, added: “We have developed open-access technologies, which means any other researchers or member of the public can use it to build their own speed-breeding chamber. This is a great example of how of expertise between institutions can lead to world-class, innovative research that makes an impact the agri-industry and the consumer.”

Generation time in most plant species represents a bottleneck in applied research programmes and breeding. Tackling this bottleneck means scientists can respond to emerging diseases, changing and increased demand for certain traits.