When we speak of food security, we often associate that with staple crops such as wheat, rice and maize. But there’s another side to the picture - one that has been largely neglected. For hundreds of millions of people, ‘orphan crops’ are a vital resource, and one that Earlham Institute’s Dr Jose De Vega and Dr Janet Higgins have been working hard to improve.

When we speak of food security, we often associate that with staple crops such as wheat, rice and maize. But there’s another side to the picture - one that has been largely neglected. For hundreds of millions of people, ‘orphan crops’ are a vital resource, and one that Earlham Institute’s Dr Jose De Vega and Dr Janet Higgins have been working hard to improve.

As part of our series on improving food security, we spoke to Dr De Vega to ask how we can improve orphan crops to withstand climate change for the benefit of hundreds of millions of the world’s most impoverished people.

This article forms part of our series on Food Security, celebrating World Food Day on October 16. 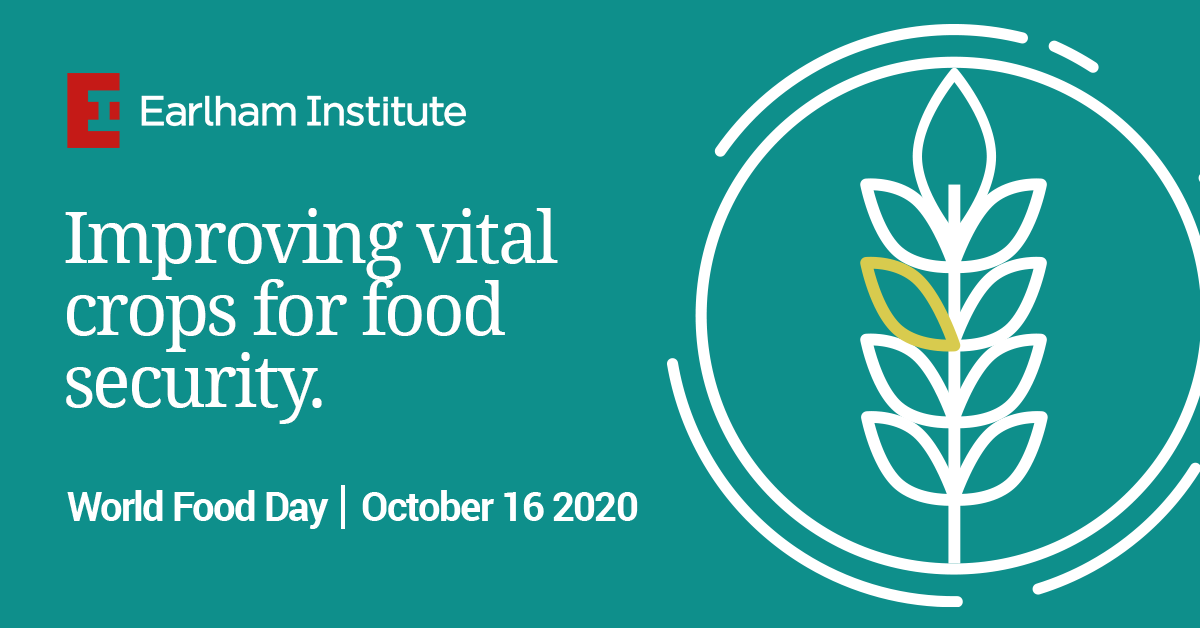 When it comes to how food security can be improved, it takes more than just calories. For many of the world’s poorest people, the nutrition and income provided by livestock products are absolutely essential, especially milk. But the forage and fodder crops which subsistence farmers need to sustain healthy herds stand to suffer some of the most extreme effects of climate change.

“It might not seem so obvious,” says De Vega, “but climate change will really affect the tropics the most. That’s where you are likely to see the worst extremes of weather, and that will have a huge impact on food security.”

Increasing extremes of weather - unpredictable, long droughts interspersed with periods of above-average rainfall - are likely to wreak havoc on food production. That is, unless we do something about it.

“We need to tailor tropical crops to the demands of each local environment,” says De Vega, whose work spans several regions throughout the continents of Asia, Africa and South America. “That means breeding resilience to shocks, so that a night of freezing weather in the middle of June, or a sudden drought, doesn’t ruin the whole field of grasses for your cows.

Much of the major international funding into crop research has gone into big staples such as wheat and rice, for which genes and their functions are being mapped in greater detail year on year. This helps breeders quickly produce more resilient varieties. Yet many crops, despite their importance for food security, cannot boast such research and development.

The lack of time and resource invested into research on them is the reason they are sometimes called ‘orphan crops’.

“It’s a bit like how there is this huge lack of funding for malaria, which kills millions each year, versus something like treatments for hair loss,” says De Vega. “Malaria is largely a disease of the developing world. It affects the poor. Those people have been neglected. It’s a similar story with orphan crops.”

With more genome sequences available, and more time spent on understanding the genetics, our research will help breeders reduce the time it takes to get more resilient crops to farmers.

De Vega wants to change that through helping to improve the resilience of orphan crops to the cascading effects of climate change. Among them are important tropical forage and fodder species such as Napier Grass, Guinea Grass and Brachiaria. He and colleague Dr Janet Higgins are achieving this through creating much needed genetic resources, which until now have been absent.

“We’re essentially a bridge between the big collections of plant material - the genebanks - and breeders,” says De Vega. One such genebank is maintained by the International Centre for Tropical Agriculture (CIAT) in Colombia, with another at the International Livestock Research Institute (ILRI) in Ethiopia. “Our strategy is to explore the natural diversity in these genebanks to find regions of DNA that provide stress tolerance in orphan crops.

“With more genome sequences available, and more time spent on understanding the genetics, our research will help breeders reduce the time it takes to get more resilient crops to farmers.”

An important crop in this regard is Brachiaria, which is increasingly being adopted worldwide as a forage grass for grazing livestock. Several Brachiaria species grow well even on marginal land such as acidic soils, which can be found frequently in the tropics.

“Most acidic soils go through two bands, one in Europe and one in the tropics,” says De Vega. “Producing more crops in low pH soils is therefore beneficial for farmers in the Tropical Belt.”

High acidity causes problems for most plants. In these soils, which can often reach a pH as low as 4, toxic ions such as Aluminium ions (Al3+) become more soluble and very highly concentrated. This causes burning of the root tip, which prevents roots from growing and leaves plants stunted and malnourished.

In recent work, De Vega has generated the first genetic resources for Brachiaria, which highlights some of the ways this crop combats toxic Al3+. Along with a new genome sequence, the data points to several genes which breeders could target to improve the crop.

“These are fundamental problems that no-one has answered before,” says De Vega, who is looking to publish similar work on drought tolerance in the coming months, which is highly important in the context of climate change. “For the first time, we’ve learned about how these species cross and hybridise, and their level of ploidy. It’s fundamental research.”

Livestock farmers in the district of Lushoto, in the Tanga region of Tanzania, are finding ways of boosting their production and lowering their environmental impact by planting improved forages. 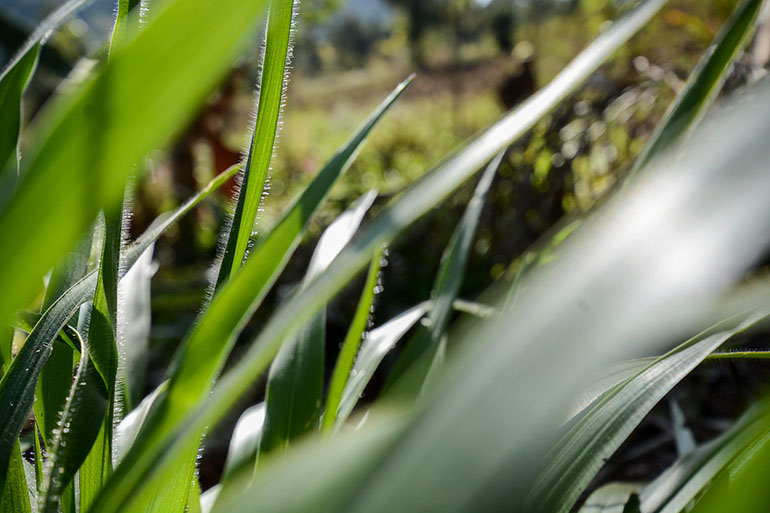 “These are fundamental problems that no-one has answered before, for the first time, we’ve learned about how these species cross and hybridise, and their level of ploidy. It’s fundamental research.”

Improving orphan crops can help subsistence farmers boost yields, but what about the nutrition of their herds and, in the bigger picture, sustainability? Livestock farming, though crucial for many, can also be highly polluting. An emissions map of the world suggests that livestock farming in the tropics emits by far the most C02/kg protein.

One project underway at the International Livestock Research Institute in Ethiopia involves comparing the DNA sequences of hundreds of species of Napier Grass - a widespread fodder crop with limited genetic resources - with the aim of making herds more productive in a given land area, which is one way to make livestock farming more efficient.

“Contrary to the logic, lots of published data shows that if you give nutritious food to the cow, with more vegetable protein and less fiber, it burps less.” says De Vega, who is also looking at how improving forage can reduce the tremendous amounts of methane belched out by ruminants. “Can we make cows produce more and belch less by feeding them a better diet?”

A 2012 study suggested that feeding livestock a high quality and high protein feed can lower methane emissions per litre of milk by up to 60%, a result which was backed up by collaborators on the GROW Colombia project earlier this year. Considering that methane emitted by cows is a significant contributor to global warming, improving feed could have a substantial ameliorating effect.

"Another potent byproduct of livestock farming, particularly from intensively managed systems, is nitrous oxide - a greenhouse gas released due to the addition of fertilisers.

This year De Vega published the results of an experiment involving more than 100 genebank samples of Guinea Grass, a widespread tropical forage crop, which showed that it can be 30-70% effective in reducing the rate at which this gas is produced by microbes in the soil.

Colleague Dr Nasmille Larke-Mejía is looking at microbes in the soil in those same fields to help pinpoint the most resource-efficient and microbe-friendly varieties of the crop. “Metagenomics should tell us about the abundance and diversity of different types of nitrifying bacteria present in the soils with the grasses,” she explains. “Nitrification turns ammonia into nitrate, which is a less ‘available’ resource of nitrogen. We’re hoping to identify the grass that reduces this the most.”

While the De Vega Group is beginning to identify some of the ways that orphan crops can be improved, an important step toward future success will be ensuring that farmers can take advantage of new resources, such as seeds. According to De Vega, much of this will come down to education.

“Most subsistence farmers don’t seed grasses,” he says. “They rely on natural grasses. The reason they don’t seed is that they don’t see the obvious benefit. The first step is showing that benefit - if you seed you can have more cows.”

That’s something the GROW Colombia project, which tackles socioeconomic development alongside fundamental research, is funding, along with capacity building exercises which ensure local solutions can be implemented in a sustainable way.

“Our projects usually include capacity building activities to grow skills in data science, as a direct, impactful path to build research capital in emerging countries,” says De Vega, who is passionate about how science can leave a fair and lasting impact.

“Climate change is vile, it attacks the weakest countries. It’s important to build local research capacity and, through combining that with improved crops that are resilient to climate change and supporting sustainable development, we can help to alleviate food insecurity and poverty in tropical regions.”