Crop domestication has been a defining feature of mankind for over 10,000 years, but how have our crops changed over this period of time?

From the mountainous regions of the tropics to the rivers and fertile alluvial plains of China, India and Mesopotamia, humans learnt to domesticate wild plants in order to sustain the populations which eventually became our cities – and civilisations.

Since 9000BC, long before the tipping point of next-generation sequencing, humans have been shuffling the genetic pack in order to grow heartier and environmentally-resistant crops.

Today, we take it for granted that our supermarket shelves are full of carrots, parsnips, potatoes and bread – but the history of where these crops came from and how they came to appear as they are – is as varied as the genetic diversity we have lost throughout thousands of years of selective breeding.

Whereas historically we selected plants based on their characteristics, from yield to flavour and even colour, we are now able to track these changes at the genetic level. How can investigating the existence of our crop plants, as well as their relatives in the wild, aid us in feeding an ever-expanding population, and how can genetics inform how we breed the crops of the future?

It’s easy to take our food access today for granted 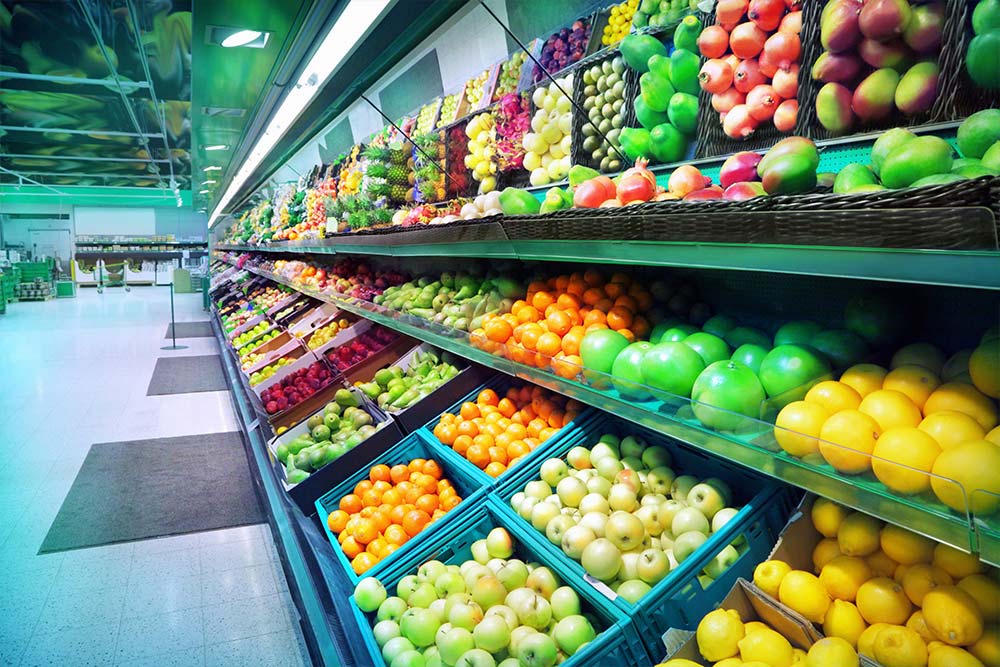 The switch from a hunter-gatherer lifestyle to a more settled existence has occurred independently in at least eight regions throughout the world. Each of these regions has produced its own diverse range of crops: wheat, rye and barley in the Fertile Crescent, rice and millet in China, sugarcane and bananas in Indo-Malaysia, maize and squash in Mexico, potatoes in Peru and sorghum in Abyssinia.

Closely following the centres of crop domestication, suddenly villages were formed and complex, stratified societies were established. While some people tended to the fields and observed how plants grew and could be improved, this didn’t require the entire population.

These plants were now dependent upon people for survival.

For the first time in human history, there was ample opportunity for artisans, who had artefacts and goods to trade, to flourish; an ancient middle class. At the top, ancient leaders commanded and supervised the harvests, keeping close guard over the storage and distribution of precious grain.

Ancient crops around the world 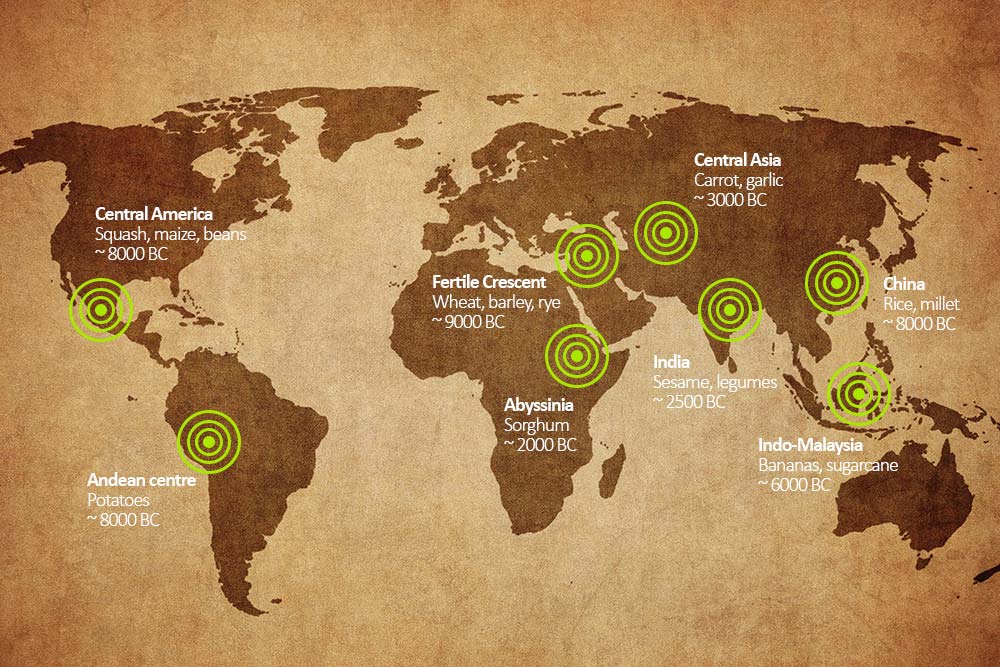 What makes a crop?

How can we be so sure about when crops became domesticated? The answer lies in the grain. At certain archaeological sites in the Fertile Crescent dating back to 10,000 – 14,000 years ago, amongst the shards of pottery and other Neolithic human leftovers, were seeds.

Not any old seeds.

At the base of wheat grains is the rachis – the part of the seed that connects the grain to the plant. Normally, the rachis would be smooth; in the wild it is necessary for a wheat plant to shed its seed when the time is right, a process called “grain shattering”.

These seeds, however, had a jagged rachis – a clear sign of threshing.

This is the first known evidence of true crop domestication. Humans must have discovered some non-dehiscent mutants (naturally occurring plants that didn’t drop their seed) and worked out (or blundered their way through blissfully unaware) that they could grow these, and then choose the right time for threshing.

These plants were now dependent upon people for survival. Fast-forward around 10,000 years, and we’re mutually co-dependent.

Agriculture is one of the defining features of our species. 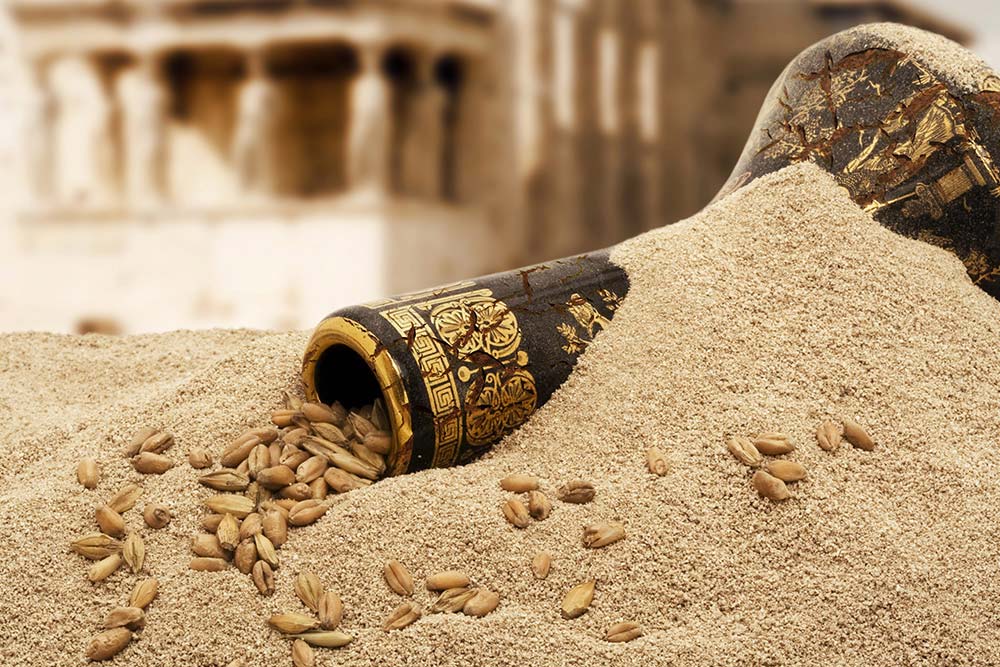 Speaking of rachises, it turns out that they’re very useful in helping us trace the genetic origins of our grass crops, as well as their whereabouts 10,000 or so years ago.

Wheat, barley and rice all have a ‘tough rachis’ that does not undergo grain shattering and, as it turns out, there are specific sections of DNA in these crops responsible for this – Shattering4 (SH4) in rice, for example. Every single domesticated variety of rice shares a similarly altered version of the SH4 gene, Sh4, which doesn’t allow plants to naturally shed their seed.

Domesticated barley plants have an equivalent ‘brittle rachis’ gene, or two for that matter, BTR1 and BTR2. When barley carries different versions of either of these genes then the seeds remain attached to the plant. Even more interestingly, barley plants grown in the Western Hemisphere mostly carry a mutation in BTR1whereas Eastern Hemisphere plants have a mutant BTR2. This means we can surmise that there were two independent domestications of barley.

We really can use genetic information to tell us a lot about our crops and how they came to be.

It’s not just rachises, either. A whole suite of similar differences (or mutations) exists between many crop plants and their wild relatives, known as the “domestication syndrome.”

Maize is a standout example of a crop that has come to look almost completely unrecognisable compared to its wild ancestor teosinte. Despite appearances, the genomes of the bulging, naked, yellow-kernelled corn on the cob and its diminutively-seeded wild relative are almost identical. 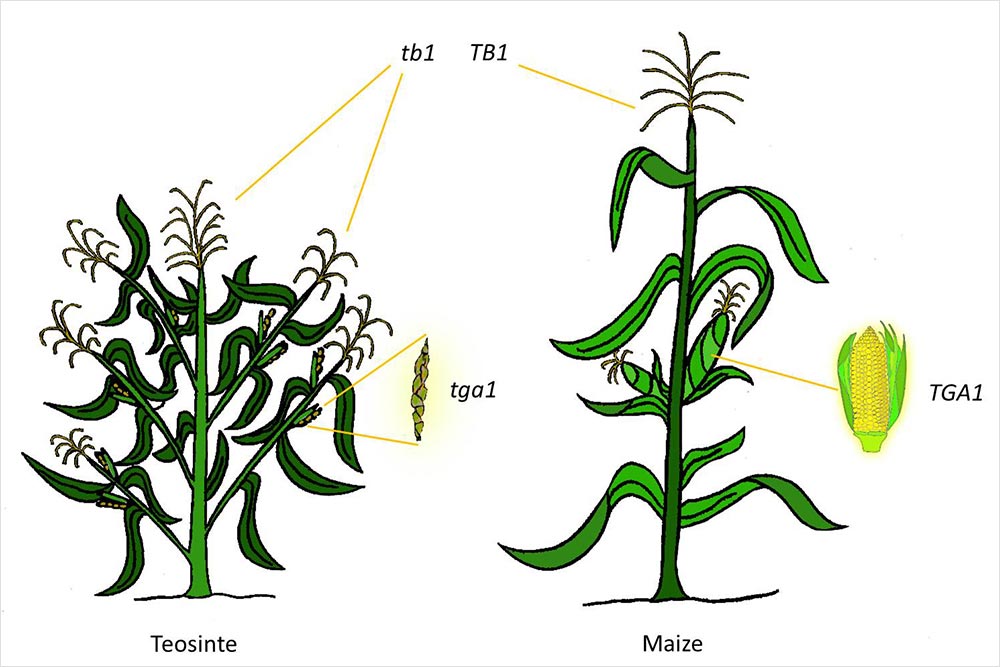 Yet, despite teosinte having multiple branches yielding grain ears with only 5-12 kernels, compared to the hundreds of kernels on fewer ears on single stems of maize, we can track these seemingly gargantuan morphological changes via only a few genetic changes.

One such candidate is teosinte branched 1 (tb1). This genetic element is responsible for the switch between the multiple branching of teosinte to the single stem of maize. Another important gene is teosinte glume architecture 1 (tga1). This one sequence of DNA is responsible for many of the differences between the 5-12 enclosed kernels of teosinte and the huge, naked 500-kernel ears of corn that we farm today.

We have come a long way since our first forays into arable farming. Early Neolithic settlements became early civilisations and empires. From the Harappan in the Indus Valley to the Sumer in Mesopotamia and the Ancient Egyptians – cultures were growing ever larger cities and ever more diverse cultures – with individual styles of writing, architecture, music, artwork, cuisine and society.

As societies and civilisations grew and diversified, our crops became more and more homogenous. 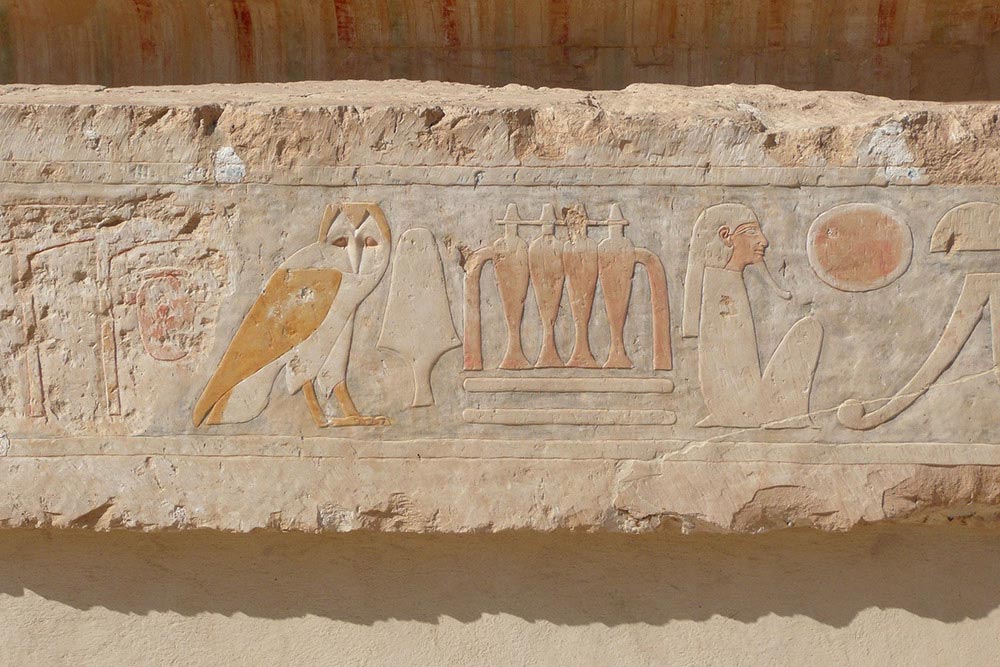 However, while our civilisations were becoming more diverse, the crops we were consuming became increasingly homogeneous – and they continue to do so. For with domestication, came what is known as a genetic bottleneck. Under strong selection pressure, traits that were valuable have been kept at the expense of natural variation.

Imagine that our current crop gene pool is the bottle and selective breeding by man is the funnel. Out of all of the wild varieties of plants and their wealth of genetic information and variability, only several have lasted. Through the bottleneck we have funnelled only certain characteristics, leaving many remaining only in ancestors and relatives of our crop plants growing in the wild. It’s like having a music collection including Chopin, Mozart, Beethoven, Bach, Khachaturian and Tchaikovsky but only listening to three symphonies.

This genetic bottleneck is incredibly apparent when we observe the fruit and vegetables in a supermarket aisle. Bundles of bananas from Australia to Ecuador; all of them almost exact clones of each other. Potatoes coming in all forms, from Maris Piper to King Edward, but essentially very similar compared to the 4,000 varieties of potato grown in the high Andes of Peru.

This lack of genetic variability comes at a price. Bananas around the world are threatened by a fungal pathogen, while potato blight – the cause of up to two million deaths in the Irish Famine – is still an ever-present threat. 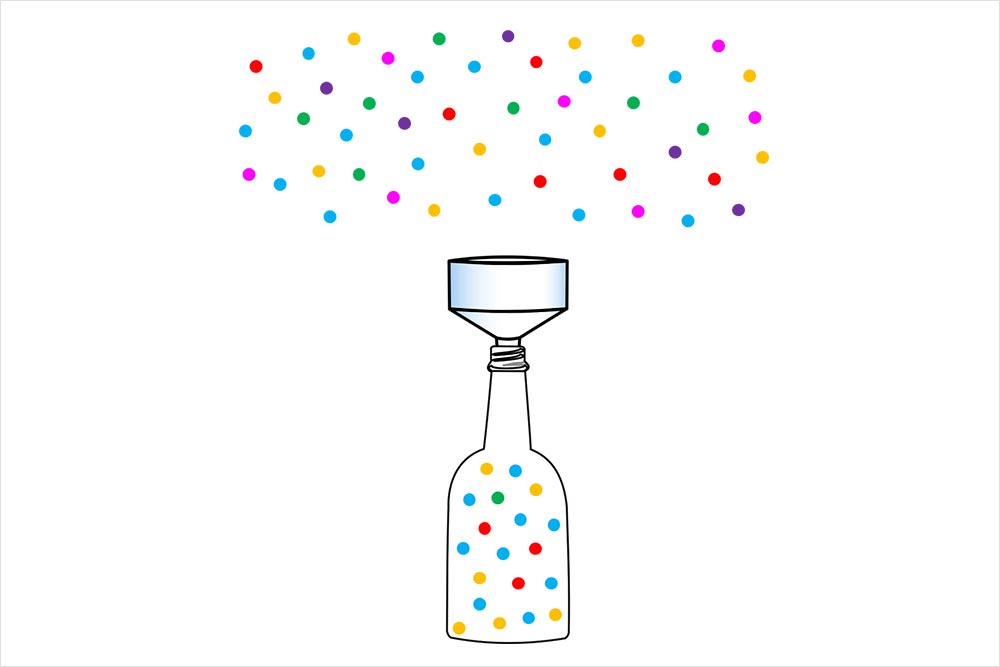 The problem is that plants, like humans, come under threat from disease and parasites. If there is only one type of plant growing in a field, and a pathogen comes along which can infect that plant, then the rest stand no chance of defending themselves. Grow multiple types of plant and there’s a much greater chance that one will have some resistance.

This is the state of agriculture today. Around the world, we grow only several types of some incredibly important plants, including wheat.

So where does EI come in?

This is where genome sequencing and big data analysis truly comes into its own. For 10,000 years, we have been almost blindly selecting crops for beneficial traits using traditional breeding techniques.

These techniques have clearly yielded some fantastic results. The green revolution of the mid-twentieth century saw Norman Borlaug save up to a billion people from starvation thanks to his cultivation of high-yielding, dwarf varieties of wheat.

However, with increasing yield and crop monoculture is the necessity for widespread use of pesticides and fungicides to withstand disease and predation. Together these account for up to 40% of crop losses.

Despite appearances, the genomes of the bulging, naked, yellow-kernelled corn on the cob and its diminutively-seeded wild relative are almost identical.

It is clear that we can trace the genetic origins of our crops and the genetic elements that control the switch to domestication. Therefore, it should also be possible to trace the genetic variability that we have lost but which remains in the wild.

At EI, we have a wealth of DNA sequencing machines tied to a staggeringly high supercomputing capacity. This advanced technology change enables our talented bioinformaticians to assemble and target the genetic elements that might shed light on how we can reintroduce variation and resistance into our existing standard disease-prone crops.

By sequencing and analysing the genomes of hundreds of wild relatives of plants including wheat, rice and potatoes, perhaps we can help to replicate the incredible diversity we see in societies around the world within the genomes of our crops.

Translating research is vital for success in the new academic landscape

A PhD, is it worth it? Just ask our students 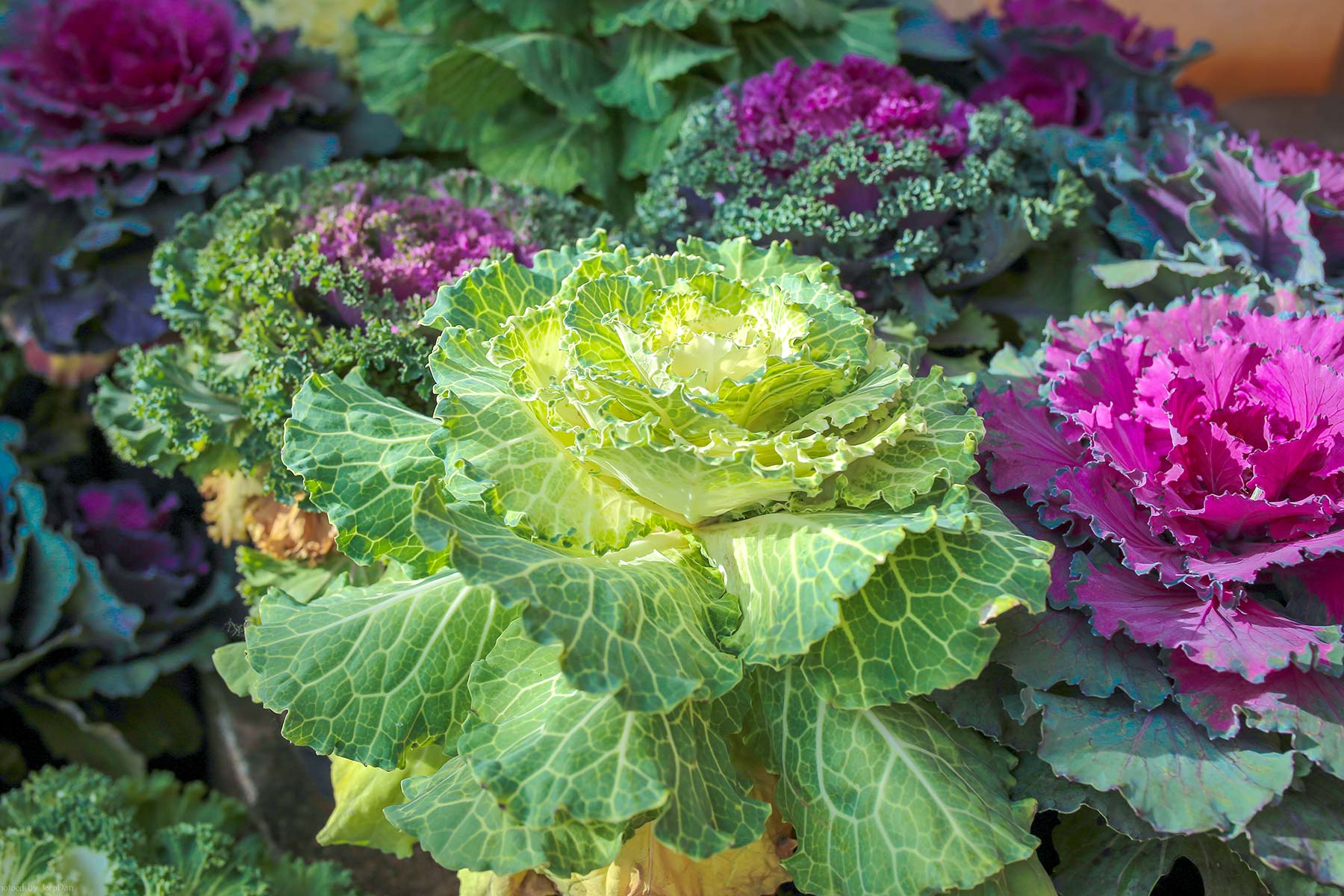 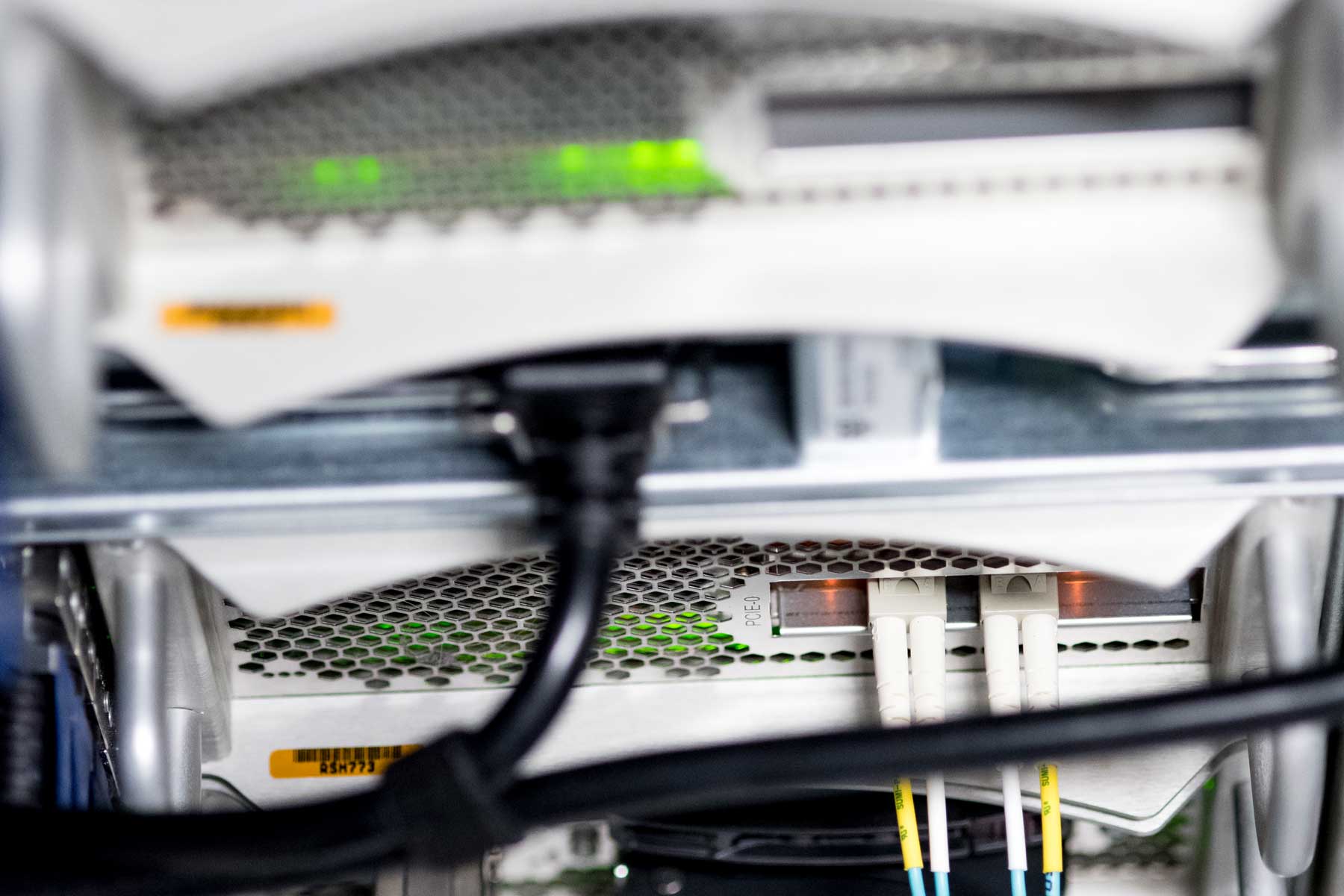 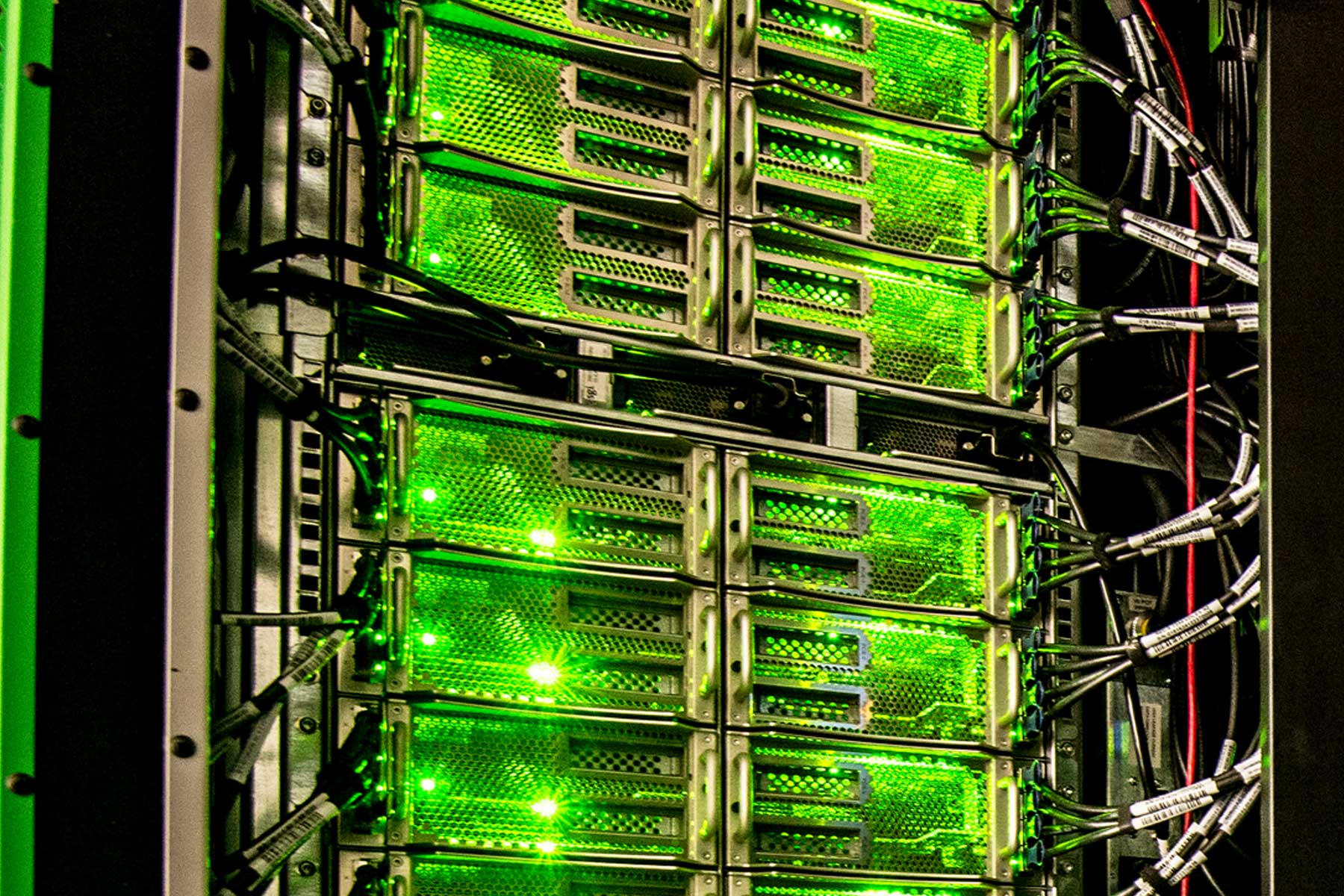 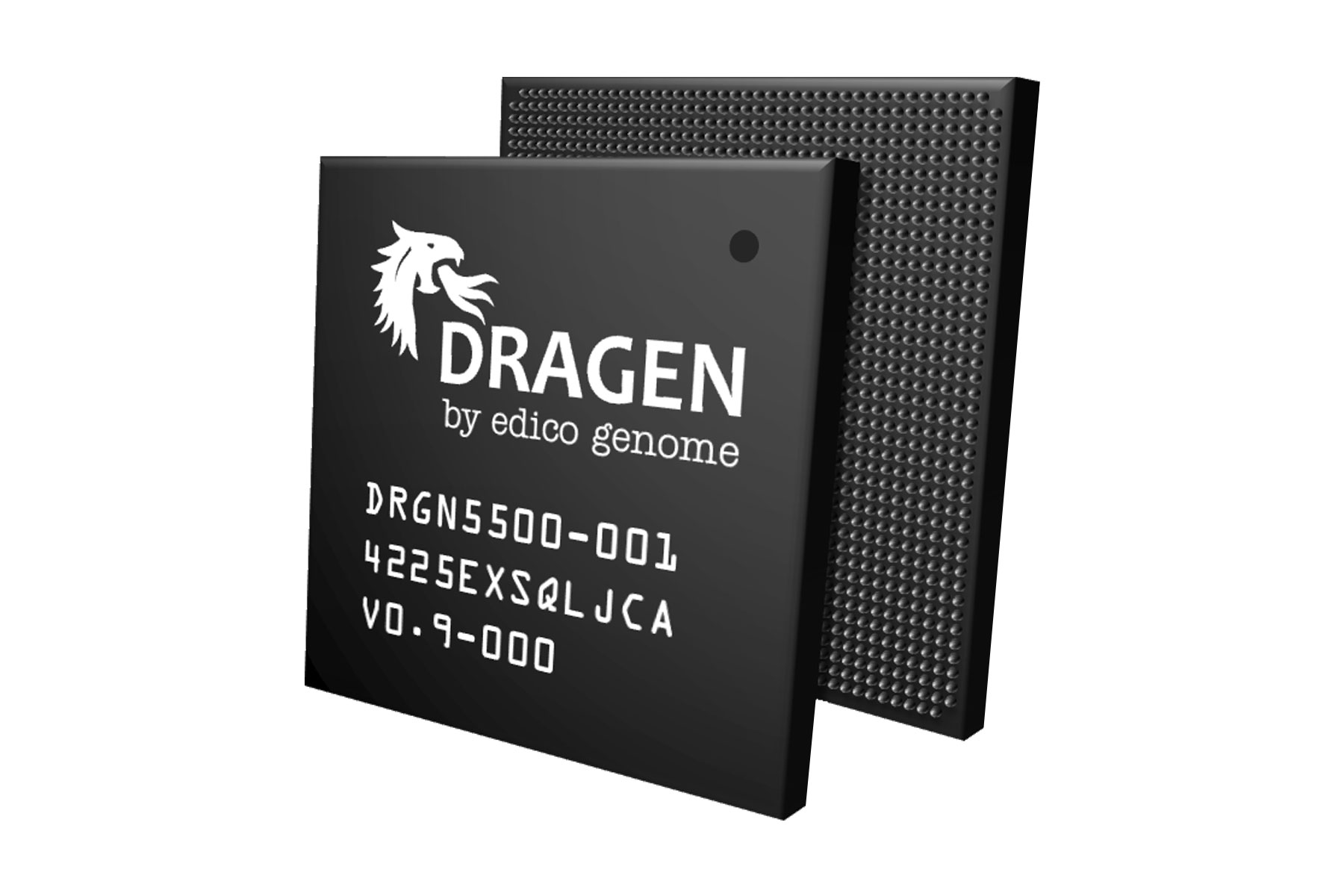