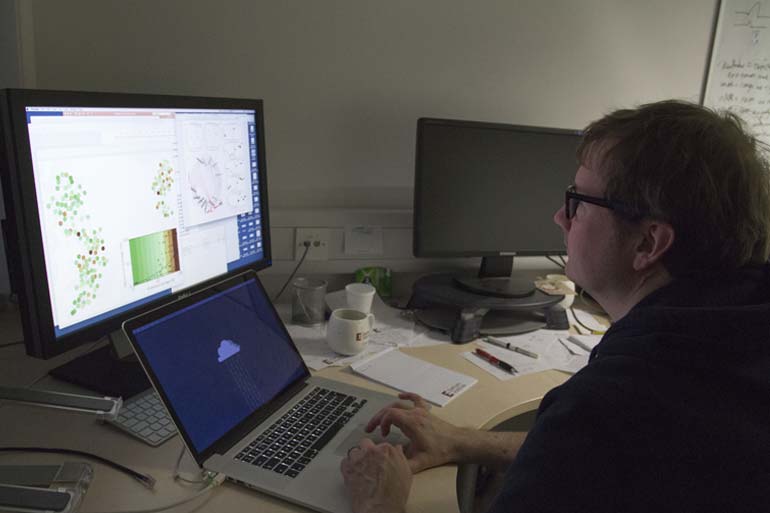 Researchers have identified genetic markers for disease tolerance that suggest UK ash trees may have a fighting chance against a fungal infection that has the potential to wipe out 90% of the European ash tree population.

The disease, called ash dieback, was first identified in Poland, where it devastated the native ash tree population. It rapidly spread across northern Europe and was discovered in the UK in 2012.

Results from the latest study published in Nature, a UK collaboration between Queen Mary University of London (QMUL), University of York, Earlham Institute (EI), John Innes Centre (JIC), NIAB and the University of Copenhagen, could contribute to breeding new varieties of ash that are tolerant to the disease.

Much like Dutch elm disease, ash dieback is aggressive, spreads quickly through the ash tree population, and has no cure, other than individual natural tolerance to the infection. It is spread on the wind or via the transfer of infected saplings between areas. Symptoms include loss of leaves and lesions, which are a useful way to diagnose fungal ash dieback, as they leave a characteristic diamond-shaped scar on the bark.

The York team had previously tested a genetic screening process on Danish trees identified by collaborators at the University of Copenhagen as having a range of different levels of disease susceptibility. Using this data alongside information from the ash tree genome, which was sequenced by researchers at QMUL by utilising EI’s reference gene models, they were able to improve the genetic markers for disease tolerance and use them to predict the tolerance of a sample of trees from across the UK.

Leading to these research findings, EI (previously ‘The Genome Analysis Centre’) generated the transcriptome and re-sequencing (together with the Institute’s previous analysis of the resistant ‘Tree 35’ from Denmark released in 2013) data to conduct the bioinformatics analysis of the UK ash tree, in alignment with the Nornex Consortium to combat Ash Dieback, funded by DEFRA and BBSRC. The analysis was carried out on a subset of the tree’s genetic regions, with high coverage across the samples. This increased the number of potential markers that could be used to sustain ash tree diversity for breeding programmes.

EI also sequenced 37 trees originating from across Europe to investigate genomic diversity in ash. The data was analysed by researchers at QMU, JIC and NIAB finding evidence for the apparent long-term decline in effective population size. The EI team generated the most comprehensive annotation of ash genes to date, and this will aid researchers in identifying genetic variants linked to specific traits associated with the killer tree disease. This will help seek out the suspected tolerant genes and support future breeding programmes of ash trees with low susceptibility to the disease.

Dr David Swarbreck, Regulatory Genomics Group Leader at EI, said: “Having a more comprehensive annotation of ash genes has improved the identification of markers for ash dieback and will aid future functional studies into this prevalent disease.”

Professor Mario Caccamo, previously at EI, now Head of Crop Bioinformatics at NIAB, added: “This effort is a great example of teamwork across several leading UK research organisations responding to the devastating threat of ash dieback. The identification of markers for tolerance will be a very important tool in the toolbox that complements other ongoing efforts to manage the threat of this disease. We have also generated important genomic resources that will support other studies and offer the foundations for more research into tackling the epidemic.”

Professor Allan Downie, Emeritus Fellow at JIC and coordinator of the programme, commented: “This work represents significant new progress in our understanding of ash dieback disease and the patterns of inheritance of tolerance to this disease. Our success has been built on excellent national and international collaborations. These have brought the strengths of genomics and transcriptomics research in the UK together with the excellent analyses of disease susceptibility done in Denmark, to enhance our research into ash trees. This progress has been breathtaking in its speed and as a research coordinator based at JIC; I have been delighted by the spirit of collaboration and determination brought to this project by my Danish and UK collaborators.

Early indications suggest that the proportion of UK trees with tolerance to ash dieback is greater than that of the Danish and Polish trees, but it is still unknown whether the UK trees have previously been infected with the disease and built tolerance or whether this is due to their genetic tolerance, is yet to be tested.

The study, “Genome sequence and genetic diversity of European ash trees” is published in the journal, Nature.

NIAB is the UK’s fastest growing crop science organisation, with rapidly expanding research capabilities in plant genetics, agronomy, farming systems and data science, the largest national field trials capability, and strong research links with industry, Government and academia. With headquarters in Cambridge, and regional offices across the country, employing more than 300 people across the UK, NIAB provides scientific research, technical services and practical advice to improve the yield, efficiency and resilience of crop production across the arable, horticulture and top and soft fruit sectors. (www.niab.com)