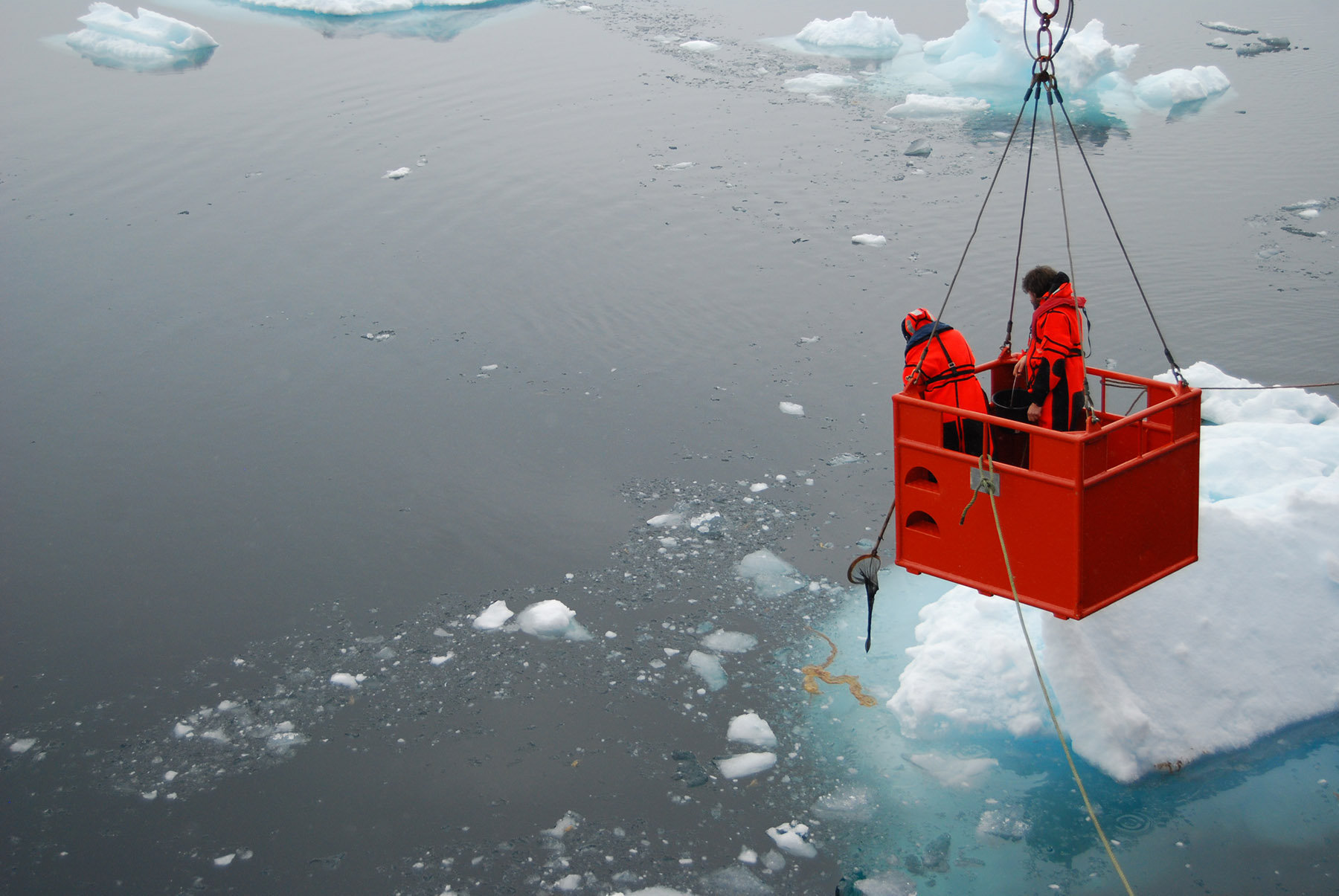 As a result of the climate crisis, global warming is likely to cause abrupt changes to important algal communities because of shifting biodiversity 'breakpoint’ boundaries in the oceans – according to research from the University of East Anglia and the Earlham Institute.

A new study, published today in the journal Nature Communications, finds that as climate change extends the warm hemisphere, these boundaries are predicted to shift pole-wards over the next hundred years.

Instead of a gradual change in microbial diversity due to warming, the researchers suggest it will happen more abruptly at what they call ‘break points’ - wherever the upper ocean temperature is around 15 degrees on an annual average, separating cold and warm waters.

The UK is one of the areas most likely to be severely affected, and more suddenly than previously thought, yet the team adds the changes could be stopped if we act swiftly to halt climate change.

Prof Thomas Mock, from UEA’s School of Environmental Sciences, said: “Algae are essential in maintaining a healthy ecosystem to balance ocean life. By absorbing energy from sunlight, carbon dioxide and water, they produce organic compounds for marine life to live off.

“These organisms underpin some of the largest food webs on Earth and drive global biogeochemical cycles.

“Accountable for at least 20 per cent of annual global carbon fixation, temperature changes could have a significant impact upon the algae that our marine systems, fisheries and ocean biodiversity depend on.

“We wanted to better-understand how the climate crisis is impacting algae worldwide from the Arctic to the Antarctic.”

The research was led by scientists at UEA in collaboration with the US Department of Energy (DOE) Joint Genome Institute (JGI, USA) and the Earlham Institute (UK). 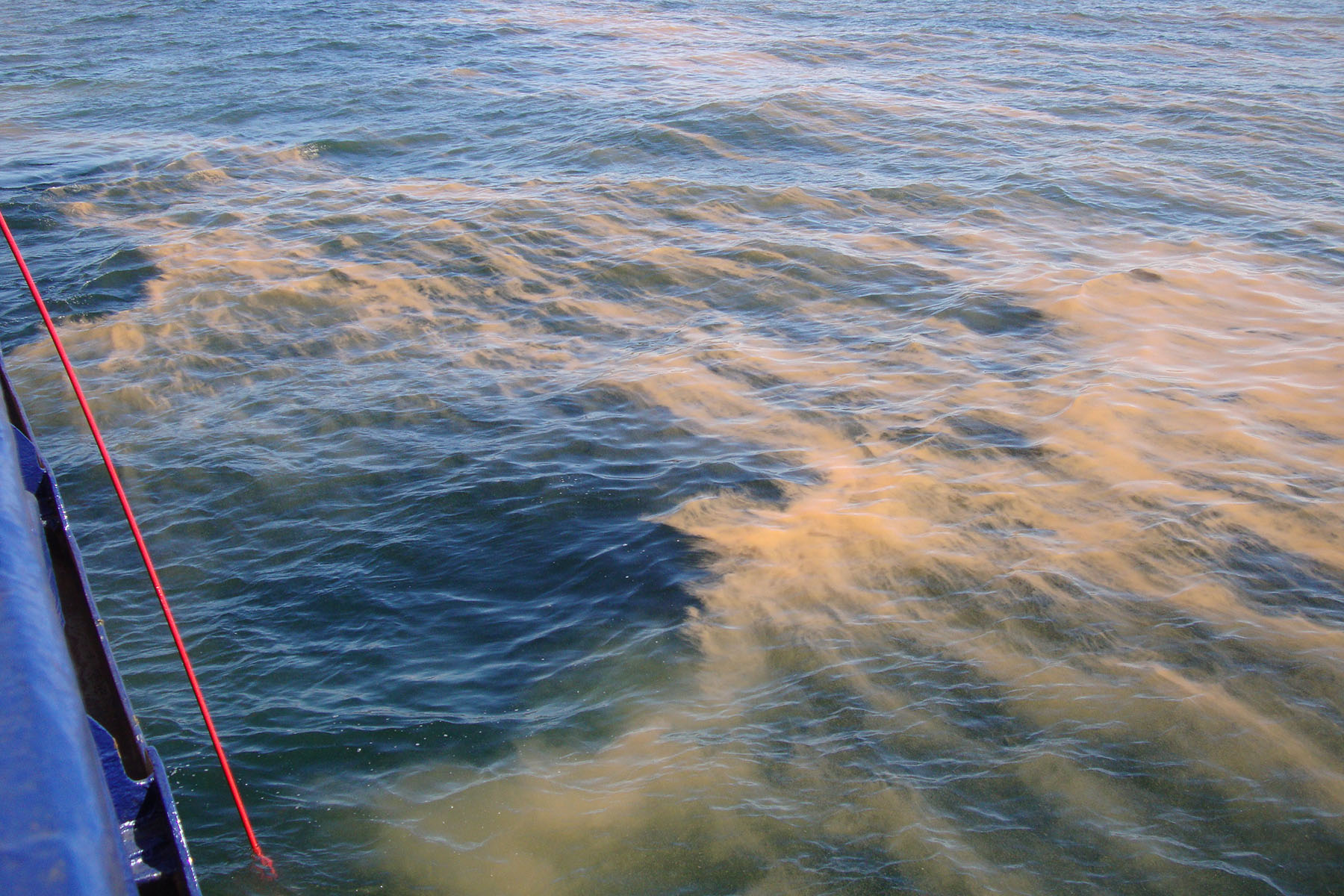 (Image above: A bloom of Phaeocystis on the side of Polarstern in the temperate region of the North Atlantic. Image above provided by Katrin Schmidt).

The major study was conducted over more than 10 years by an international team of 32 researchers, from institutions including the University of Exeter in the UK and the Alfred Wegener Institute for Polar and Marine Research in Germany.

It involved the first pole-to-pole analysis of how algae (Eukaryotic phytoplankton) and their expressed genes are geographically distributed in the oceans. Therefore, the team studied how their gene activity is changing due to environmental conditions in the upper ocean from pole to pole.

As the upper ocean is already experiencing significant warming due to rising CO2 levels, the researchers estimated how the distribution of these algal communities might change based on a model from the Intergovernmental Panel on Climate Change (IPCC) 5th Assessment Report.

The algal communities’ diversity and gene activity are shaped by interactions with microscopic single-celled organisms, or prokaryotes, as part of complex microbiomes.

The researchers found that these global communities can be split into two main clusters - organisms that mainly live in cold polar and warm non-polar waters.

The geographic patterns are best explained by the differences in the water’s physical structure (for example, seasonally mixed cold versus permanently stratified warm water) of the upper ocean caused by latitudinal gradients of temperature.

The organisms were analysed through nucleic acids extraction and DNA and mRNA sequencing of samples collected during four research cruises in the Arctic Ocean, North Atlantic Ocean, South Atlantic Ocean and Southern Ocean. 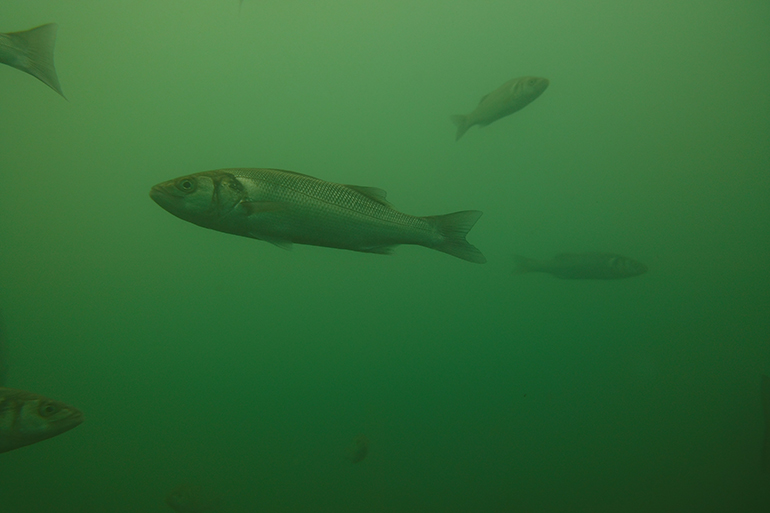 (Image above: Thomas Mock has seen shifting sea life, for example, this European sea bass, off England’s southeast coast as average surface temperatures increase due to climate change. European sea bass have a temperature optimum range of around 10 to 25 degrees Celsius, while cod, iconic for its popularity at UK fish-and-chip shops, prefer to live between about 1 and 15 degrees Celsius. Image provided by Thomas Mock of UEA).

Prof Mock, said: “Significant international efforts have provided insights into what drives the diversity of these organisms and their global biogeography in the global ocean, however, there is still limited understanding of environmental conditions responsible for differences between local species communities on a large scale from pole to pole.

“Our results provide new insights into how changing environmental conditions correlate with biodiversity changes subject to large-scale environmental fluctuation and disturbances. This knowledge is essential for predicting the consequences of global warming and therefore may guide environmental management.

“We can expect the marine systems around the UK and other countries on this latitude to be severely affected, and more suddenly than previously thought.

“The largest ecosystem change will occur when marine microalgal communities and their associated bacteria around the UK will be replaced by their warm-water counterparts.

“This is expected to be caused by the pole-ward shifting ecosystem boundary or ‘biodiversity break point’ separating both communities. For this to take place, the annual average upper ocean temperature needs to become warmer than 15C.

“It’s not irreversible though, if we can stop global warming,” he added. 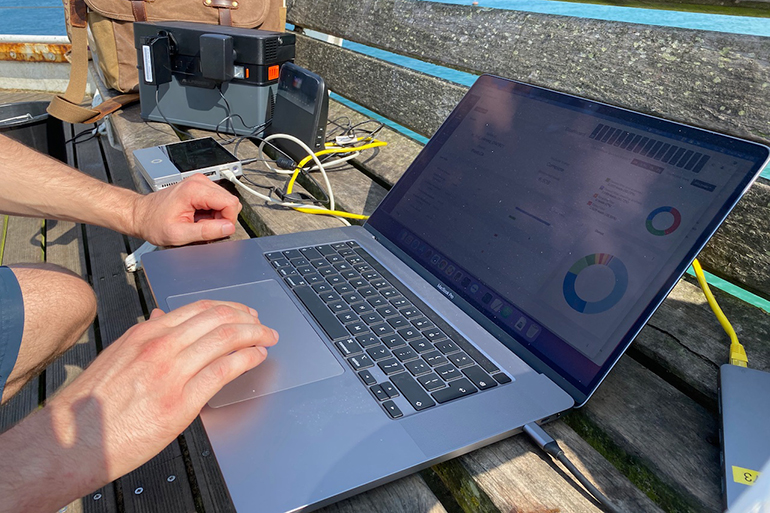 Co-author Dr Richard Leggett at the Earlham Institute, added: “This study also shows what an important role advances in DNA sequencing technologies have played in understanding ocean-based ecosystems and, in doing so, helping researchers shed light on and grapple with some of the biggest environmental challenges facing the planet.”

The work was led by two former PhD students from UEA’s Schools of Environmental Sciences and Computing Sciences, Dr Kara Martin (also based at the Earlham Institute) and Dr Katrin Schmidt.

Dr Martin, said: “These results suggest that the most important ecological boundary in the upper ocean separates polar from non-polar algal microbiomes at both hemispheres, which not only alters the spatial scaling of algal microbiomes but also shifts pole-wards due to global warming.

“We predict that ‘break points’ of microbial diversity will move markedly pole-wards due to warming – particularly around the British Isles - with abrupt shifts in algal microbiomes caused by human-induced climate change.”

“This has been a wonderful experience and an incredible opportunity to work with a magnificent team. Together, we analysed an amazing dataset which expands the latitude of our microbial ocean research, enabling us to gain insights to our changing ocean from pole to pole.”

Dr Schmidt, said: “During our research cruises we already noticed quite different algal communities from warm to cold waters. This initial finding was supported by our results suggesting that the most important ecological boundary in the upper ocean separates polar from non-polar algal microbiomes at both hemispheres. And more importantly, this boundary not only alters the spatial scaling of algal microbiomes but also shifts pole-wards due to global warming.”

“As microalgae are key to the base of the food chain we can expect major changes in the rest of the marine ecosystem, with implications for fisheries, as well as marine conservation.”

“The ‘biological carbon pump’ whereby the ocean takes up carbon dioxide from the atmosphere will change with this shift in microalgal communities – most likely becoming less effective – which could in turn feedback to amplify global warming.”

Sequencing was done at the JGI as part of the Community Science Program project Sea of Change: Eukaryotic Phytoplankton Communities in the Arctic Ocean.

‘The biogeographic differentiation of algal microbiomes in the upper ocean from pole to pole’ was published in Nature Communications on 16 September 2021.

For more information or to request an interview, please contact the UEA Communications Office on +44 (0)1603 593496 or email communications@uea.ac.uk.

The University of East Anglia (UEA) is a UK Top 25 university and is ranked in the top 50 globally for research citations. Known for its world-leading research and good student experience, it was awarded Gold in the Teaching Excellence Framework and is a leading member of Norwich Research Park, one of Europe’s biggest concentrations of researchers in the fields of environment, health and plant science.