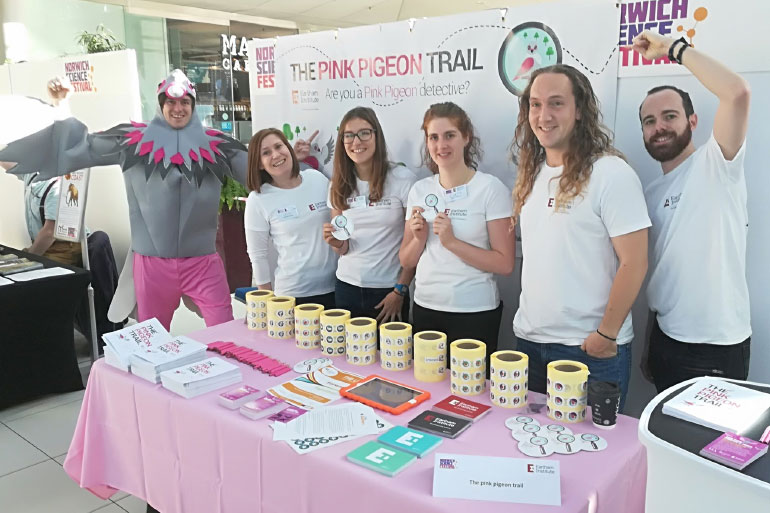 Leading Academics at UEA and the Norwich Research Park are recognised for their commitment to making an impact through their research at the eleventh UEA Engagement Awards, which takes place on 12 June.

The Earlham Institute (EI) brought the Pink Pigeon Trail to the Norwich Science Festival 2018 and it was a huge success. Led by the Communications Team at EI, the Pink Pigeon trail set to highlight the plight of a bird that was, until recently, set to go the same way as its cousin, the Dodo.

The parallels are quite staggering, in fact, as the bird is endemic to the island of Mauritius in the Indian Ocean. That was until Gerald Durrell decided that ten pigeons were not a sustainable number and set a conservation programme underway that has seen their numbers rise to around 400 today.

A success, you might think. Yet, the pink pigeon remains threatened. For a start, the amount of native forest on Mauritius is meagre, covering less than 5% of the land, therefore, the pink pigeon doesn’t have far to roam, fly and roost.

More interestingly for PhD Student Camilla Ryan at EI and UEA, who jointly won the Project Award with Science Communications & Outreach Manager Dr Peter Bickerton, the pink pigeon population has been forced through quite a severe bottleneck, which means that the surviving population lacks genetic diversity.

A lack of genetic diversity afflicts a great range of threatened species and better understanding how this puts them at greater risk of disease and climate change is of great importance when informing conservation efforts. It might be that better understanding the population genetics of such species can help breeding programmes, introducing much needed diversity from zoo specimens, for example.

The Pink Pigeon Trail was put on in the Forum and at Norwich Cathedral over three days at the Norwich Science Festival and will be making a return this June at the Royal Norfolk Show. Camilla’s accompanying talk, ‘The Pink Pigeon’s Peril’, was so well received that she will be giving the UEA Children’s Lecture this Christmas, where the now-infamous ‘Pete the Pink Pigeon’ will also make a small poetic contribution.

The trail itself was made up of a booklet which asked ten questions of the participants, who had to find the answers hidden around the Forum on ten different pink pigeons. Each correct answer gained a sticker, with a complete set of ten answers getting a badge that read: “I’m a Pink Pigeon Detective!”

Importantly, the feedback from the activity showed that participants had come away with a greater appreciation of the importance of genomics in tackling issues related to conservation and the environment - with around 85% saying that it was “essential” or “very important” by the end of the three days.

Camilla Ryan, said: “It was great seeing how everyone became so passionate about saving the pink pigeon, especially as most people woke up that day having no clue what a pink pigeon was!”