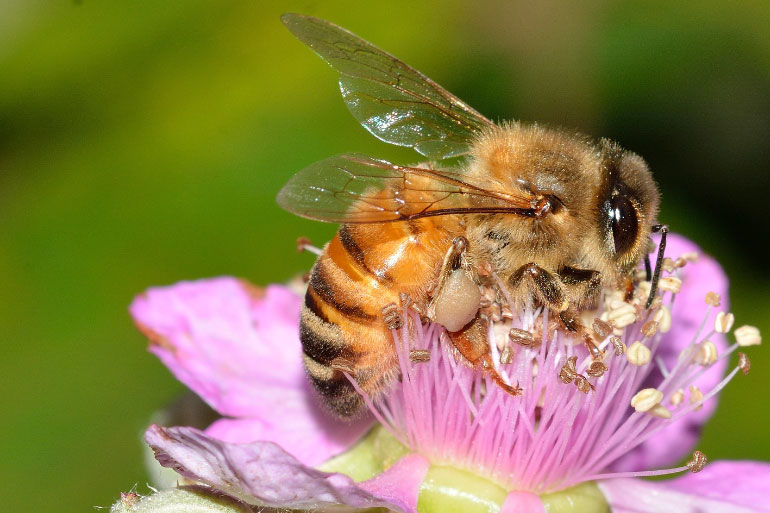 Earlham Institute (EI), with the University of East Anglia (UEA), have developed a new method to rapidly identify the sources of bee pollen to understand which flowers are important for bees.

Bees are in vast decline in the UK and across Europe, as are the wildflowers on which they rely. Bees have an essential role in our ecosystems and a third of all our food is dependent on their pollination; just in economic worth, pollination by bees is annually estimated at £265 billion, worldwide.

The main risks to bees include wide-spread pesticide use in agriculture, parasites, disease and climate change, and crucially - the loss of valuable biodiversity which poses a further threat to bees and other wild pollinators. One way to help boost their numbers is by planting the correct wildflowers, providing a better habitat for pollinators to disperse, nest and breed.

However, it is unclear which plant species are the most preferred between different pollinators, including bees, and how this might change over time and in different environmental conditions. In agriculture, farmers want to know that the pollinators are actually visiting the plants they need them to. Historically, scientists used light microscopy to identify individual bee-collected pollen grains, which was a time-consuming and impractical method.

To obtain a more accurate understanding without the need for laborious manual inspection of pollen, scientists have developed a rapid analysis method called ‘Reverse Metagenomics’ (RevMet) that can identify the plants that individual bees visit using the MinION, a portable DNA sequencer from Oxford Nanopore Technologies.

The portability of the equipment involved means that this type of analysis could be performed on-site where bees are collected and sampled - vastly increasing our understanding of where bees look for pollen on a national scale.

Ned Peel, the PhD student who carried out the research in the Leggett Group at EI: “Importantly, from a mixed sample of pollen, as well as being able to work out what species of plant bees have visited, we can also measure the relative quantities of each type of pollen. This type of analysis can be applied not only to conserving pollinators but to helping us to sustainably improve crop production that relies on pollinators.”

Previous costly and inefficient manual methods to measure pollen and other genomics methods, such as metabarcoding, have been developed - but these can’t accurately measure how much of each different type of pollen is found in a sample.

Prof Douglas Yu from UEA's School of Biological Sciences, who had the initial idea for the project, said: “In standard metagenomics, short stretches of DNA from mixed samples are compared to whole genomes, which can be expensive to generate. We discovered that we could conduct the analysis using ‘reference skims’ instead.

“To make a reference skim, we carry out really cheap sequencing that only needs to partially cover the complete genome of the plant and does not need to be assembled. To support our tests, we rapidly generated 49 wild UK plant species; assembling these genomes would have taken us months of work and required a lot of money. With our method, the pollen is separately sequenced with the MinION, which generates long DNA sequences - we then used the 49 reference skims to identify each of the long reads to local plant species."

This technique can reliably differentiate species in a mixed sample according to the amount of DNA present of each. The results showed that honeybees, and two species of bumblebee, demonstrate a high preference for one plant species per foraging trip.”

The reverse metagenomics pipeline can be applied to more questions than just what plants bees like to pollinate; we can also understand whether certain wildflowers compete with agricultural flowers for pollinators, or the behaviour of pollinators across large areas and land types.

The method could also be used to study other mixed samples, such as herbivore dung, for diet analysis; and air, to identify airborne allergenic pollen and crop pathogens.

The University of East Anglia (UEA) is a UK Top 15 university. Known for its world-leading research and outstanding student experience, it was awarded Gold in the Teaching Excellence Framework. UEA is a leading member of Norwich Research Park, one of Europe’s biggest concentrations of researchers in the fields of environment, health and plant science. It is ranked in the Top 200 of the world’s universities and is in the Top 50 for research citations. www.uea.ac.uk