Bees are in decline. How can technology and algorithm development boost their chances, through understanding which wild flowers they pollinate?

Bees are in drastic decline, which affects the food we eat. Perhaps one way to bolster their survival is to plant the right sources of pollen. But just what flowers do bees like in the first place? And how do we track them? What about in different months and in different areas? How do we make sure that bees are visiting the agricultural plants we want them to? It’s a story of both pollen and pollinators; one that might be at least partially solved using reverse metagenomics and the MinION.

It’s not just bees. Insects all over Europe have seen their numbers plummet, due to a variety of factors, mainly including habitat loss due to the ever-persistent encroachment of humanity on natural land and the intensification of agriculture. Wildflower meadows are an increasingly rare sight.

Some people would look to robot bees to artificially and automatically pollinate our crops, but why would you?

For a start, they don’t form a vital constituent of the food chain, and would probably kill the birds that accidentally ate them. The precious metals needed to build them would lead to more environmental destruction. Why not invest time and effort into sustaining bee populations, through increasing the number of plants that they require to survive?

At the same time, we can advance the field in applying the latest, long read DNA sequencing technologies to analysing not just bacterial samples, but mixed communities of animals, plants, fungi and algae, too.

Habitat loss has resulted in a rapid decline in the bee population, which are essential for the pollination of our crops and plants. 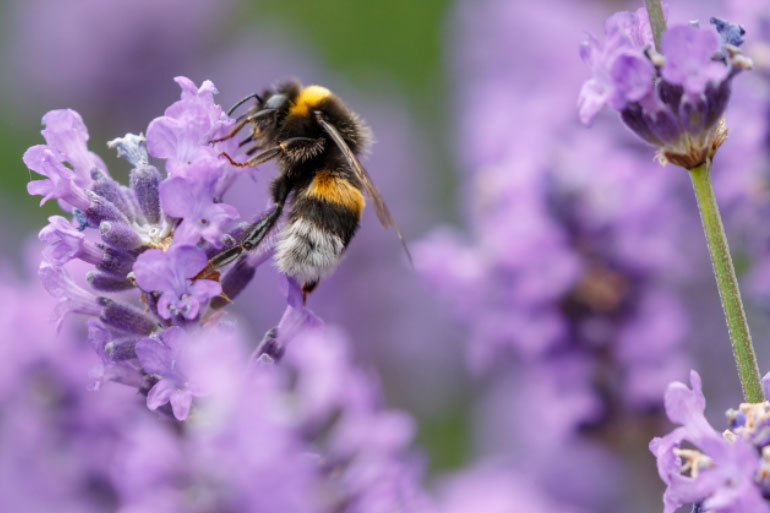 Why not invest time and effort into sustaining bee populations, through increasing the number of plants that they require to survive?

If we are to increase the numbers of wild plants to support bees, however, and other insects besides, it’s probably useful to understand which ones they pollinate, where, and when.

That’s where Ned Peel of the Leggett Group at EI, along with partners at UEA, comes in. Ned is fronting a reverse metagenomics project to track what plants bees have visited via the pollen grains they pick up, using data gleaned from next-, and third-generation genome sequencing technologies.

Understanding what plants bees like to visit is important when considering how to conserve bees, but there are more. Just what types of plants do pollinators prefer, and do these compete with the food crops that also require pollination by them? How does this pollination map change over time and in different regions of the UK?

It’s an interesting question, but one that has been slow to answer as previous, non-DNA methods required samples of pollen to be taken from bees, then the pollen grains painstakingly analysed by expert eyes using a light microscope.

Considering a pollen grain can be as small as 0.6 micrometres, and the average bee might pick up 15mg of pollen in a single visit, you can imagine how difficult it might be to paint a national picture over time.

Now that we can sequence and analyse DNA samples using an Oxford Nanopore MinION in mere hours, however, we can make that national picture much clearer.

Ned is fronting a reverse metagenomics project to track what plants bees have visited via the pollen grains they pick up, using data gleaned from next-, and third-generation genome sequencing technologies.

DNA sequencing with the MinION.

Imagine if you could sequence DNA in real time, anywhere in the world, with a machine no bigger than your hand. Oh wait, you can!

The Leggett Group at EI has been instrumental in helping push the development of such technology, which will one day allow us to sequence whole chromosomes, or even whole genomes, in one go (and already does in some instances).

The kit, known as the MinION, is especially useful for analysing the environment, where lots of different species exist in communities, and it can be really difficult to tell what DNA belongs to which organism. However, with techniques such as the one we describe here, our scientists are helping us to take up that difficult challenge.

Previous methods to help in this effort have stumbled when it comes to accurately quantifying the relative amount of each different type of plant within a mixed pollen grain sample.

As bees tend to prefer certain plants over others, this poses a significant drawback when tackling the research question posed. The Leggett group at EI therefore teamed up with collaborators at UEA to set about finding a better, more quantitative method. The idea is that we extract DNA from pollen samples obtained from bees collected in the wild, sequence the DNA, and then match this to the plant that it comes from.

This is not the simple test it sounds, however. For a start, we’re not talking about individual DNA samples, but a mixture of different species within a sample. Secondly, if you want to identify the pollen in this way, you need to match it to something - a reference database of plants.

This doesn’t actually exist, as relatively few plant genomes have been sequenced, especially UK wildflowers. Thirdly, we want the data to reflect the relative abundance of each type of grain in a sample.

The result is a nifty solution, known as RevMet (reverse metagenomics), that covers all three bases.

Ned's project involves aligning datasets from DNA sequencing of samples which were collected from bees in the wild, to match the extracted pollen DNA (which is a mixture of different pollen grain species within a single sample) back to the plant it comes from. 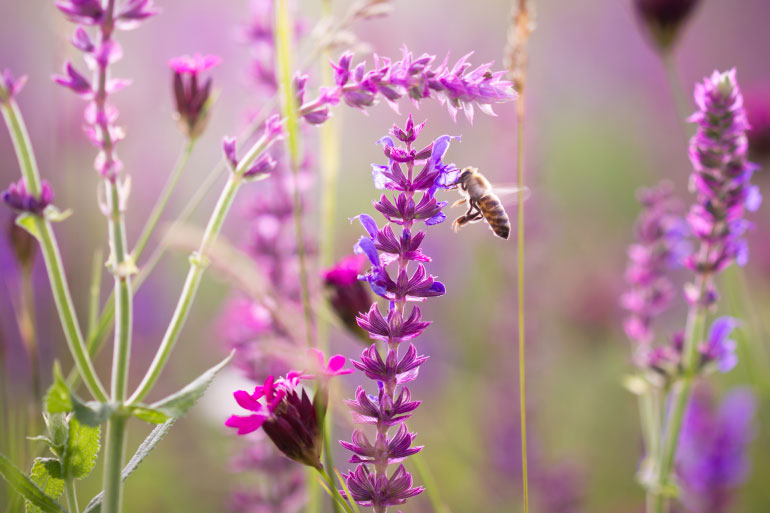 The idea is that we extract DNA from pollen samples obtained from bees collected in the wild, sequence the DNA, and then match this to the plant that it comes from. This is not the simple test it sounds, however.

Rather than performing full genome sequencing of the 49 UK wildflowers that they were interested in, which could cost several tens of thousands of pounds, the team instead obtained small sets of short DNA sequences for each plant, known as “genome skims”, at a cost of about £90 each.

Armed with this data, the team performed PCR-free, long-read DNA sequencing of mixed pollen samples collected from three different species of bee (for about £60 per sample). So, instead of sequencing the pollen grains and then matching them to a plant reference database, the genome skims could instead be uniquely matched to the DNA sequences obtained from the pollen grain samples - a wholly quicker and cheaper approach.

Overall, 48 pollen samples were collected from three species of bee: Apis mellifera (the honey bee), and two species of bumblebee, Bombus terrestris/lucorum (actually two species but impossible to tell the difference by looking at them) and Bombus lapidarius.

When the 49 plant genome skims were compared against the wild pollen samples, just under 50% were matched with few false positives or false negatives when filtering out anything that matched fewer than 1% of the pollen DNA reads.

Importantly, as a step forward, the method was reliably semi-quantitative - meaning that it could tell apart plant species that were present in low or high amounts.

There is still a bit of work to do when it comes to making the technique fully quantitative, due to the error rates associated with using the MinION, the differences in coverage of the genome skims (some samples didn’t contain enough reads, and the fact that very closely related species can produce false positives.

Much of this will be resolved as the sequencers themselves become more accurate and yet cheaper, the latter allowing a greater coverage for the wild plant genome skims.

When the 49 plant genome skims were compared against the wild pollen samples, just under 50% were matched with few false positives or false negatives when filtering out anything that matched fewer than 1% of the pollen DNA reads.

DNA sequencing usually involves chopping all of the DNA from an organism up into tiny fragments, reading the chemical letters that make up DNA (A, T, G and C) with a fancy camera inside huge machines, which detect flashes of light given off by each of the different letters of the DNA code, and then getting a computer to stick the pieces all back together again.

This can take a while, and, although it’s cheaper nowadays, can still cost many thousands of pounds per genome. To get a genome that we think is mostly accurate, we need to sequence around 40 of them to be sure that we have everything in the right combination.

Instead, for diagnostic purposes, what the team did here was simply chop the DNA up, read the letters, and then use these to match up to the longer reads obtained from the MinION. In that way, the team avoided the costly, time consuming and unnecessary step of obtaining a whole genome sequence. Really, we sequenced about half a genome for each of the plants in our study.

This novel protocol has obvious applications when it comes to understanding pollinators. As a first step, the team noted clear and consistent differences in the preference of different bees for different plants, and that all of the bees showed a high fidelity to one species of plant.

Going forwards, the method could be used to compare pollinators throughout the country, understand the capacity of different insects for carrying pollen, and even inform us of effects such as a loss of pollination service (our food that is pollinated by insects) due to competition between wildflowers and our crop plants.

Away from pollination, there are a number of areas that are opened up for exploration thanks to this semi-quantitative method of eukaryotic metagenomics. We could analyse the diets of herbivores by looking at their stomach, or fecal contents. Perhaps we could have a more in-depth understanding of plant-fungal interactions in the soil, or detect hay-fever-causing pollen grains in the air.

Another interesting approach the Leggett Group has taken is to apply this to the oceans, so that we can get a better picture of what's happening to important primary producers, such as green algae, in warming seas. You can read all about Emma Langan's work on this, here.

Whatever the application, this novel method has opened up a route to performing metagenomics on eukaryotes (plants, animals, algae, fungi), that hasn’t previously been so affordable or imminently achievable.

Long read DNA sequencing using the Oxford Nanopore MinION has historically been successful mainly on the analysis of mixed bacterial communities, and we’ve been looking for ways to effectively perform similar metagenomics analysis on eukaryotes. Methods such as this will help us towards that aim.

This novel protocol has obvious applications when it comes to understanding pollinators. As a first step, the team noted clear and consistent differences in the preference of different bees for different plants, and that all of the bees showed a high fidelity to one species of plant.

Perhaps we could have a more in-depth understanding of plant-fungal interactions in the soil, or detect hay-fever-causing pollen grains in the air.