At the Earlham Institute Biofoundry, our team provides access to state-of-the-art automation platforms and applies synthetic biology approaches to speed up and scale up research.

At the Earlham Institute Biofoundry, our team provides access to state-of-the-art automation platforms and applies synthetic biology approaches to speed up and scale up research.

Dr Jose A. Carrasco Lopez manages the facility, which houses several high-end automation platforms that are out of the scope of most research labs. These include liquid handling platforms that can transfer nanolitre volumes with delicate precision using acoustic energy, platforms for microfermentation, and several versatile platforms that can automate a wide range of molecular and microbiological workflows.

Jose is a microbiologist and molecular biologist interested in pursuing biotech innovation and new approaches to solve human problems. 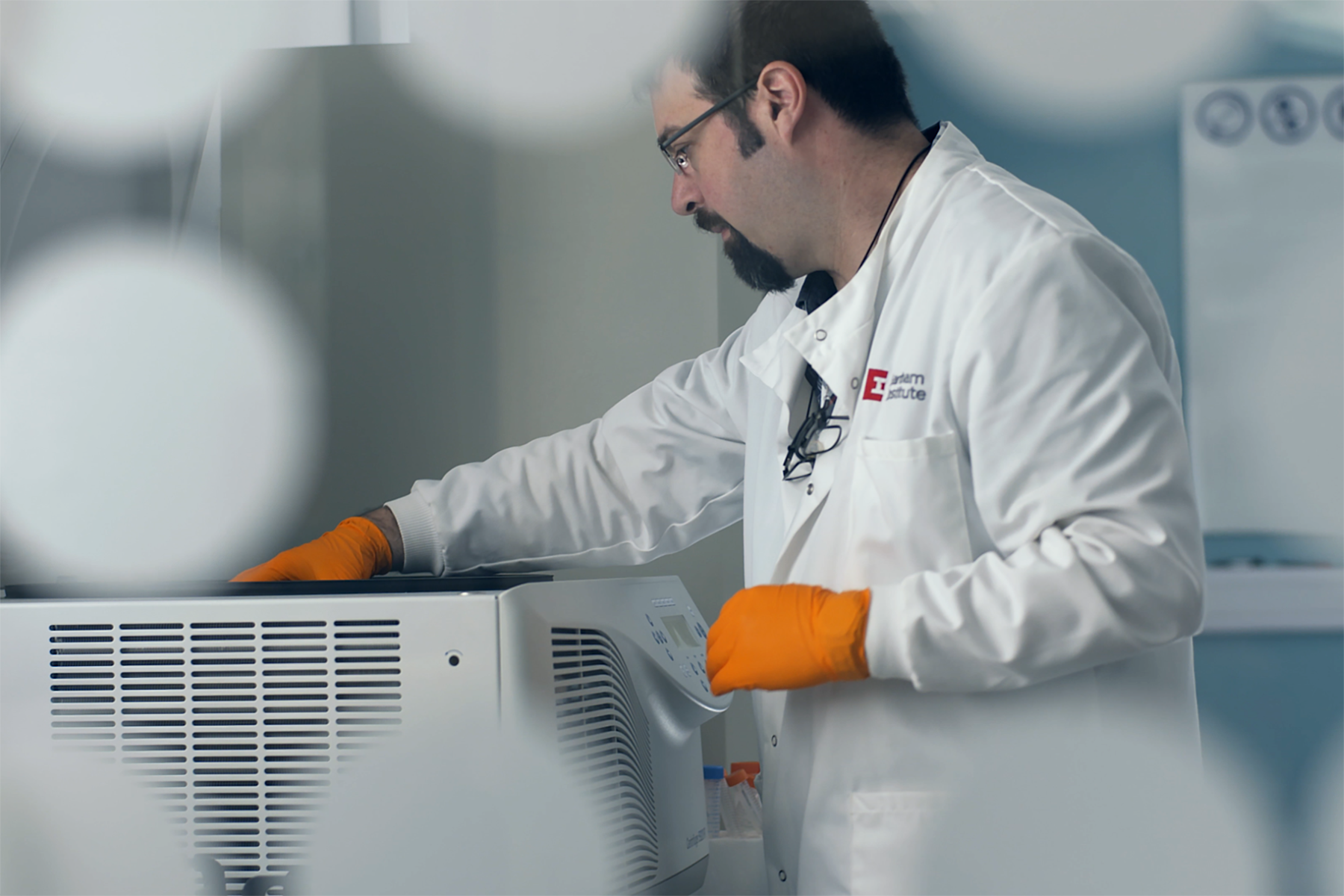 What is Synthetic Biology?

Synthetic biology is the application of engineering principles and modelling to biology and biotechnology.

Its goal is to advance our ability to predictably design or reprogram living organisms, improving our understanding of living systems and accelerating biotechnology.

Synthetic biology applies mathematical methods, as well as engineering concepts, such as standardisation, modularity, and the use of abstraction hierarchies to manage biological complexity. These approaches are applied in iterative cycles of design–build–test–learn, where quantitative data from the end of each cycle are fed into predictive models to improve later design cycles.

Many experiments in molecular biology and biotechnology require the assembly of complex DNA molecules. Therefore, one of the earliest applications of synthetic biology approaches was to DNA assembly, applying standardisation and modularity to molecular cloning.

Foundries are places where metal and glass are cast into particular forms and were the basis of the industrial revolution. In a similar way, a biofoundry can be described as an integrated facility that is built to advance and apply synthetic biology approaches, driving a modern day revolution in industrial biotechnology.

There are several biofoundries in the UK, including Gene Mill in Liverpool, Manchester SynBioChem, the London DNA Foundry at Imperial College, the Edinburgh Genome Foundry, and the Earlham Institute Biofoundry here in Norwich. All have similar approaches to experimentation and automation using interoperable toolkits of standard DNA parts and applying iterative design-build-test-learn cycles.

A typical biofoundry will work with a number of different biological systems, such as different microbes, or even plants and algae.

The physical components of the foundry are the automation platforms used to miniaturise, scale-up and automate experimental workflows - offering the opportunity to substantially increase the capacity and pace of research and development.

The Hamilton platform used for automating a very wide range of powerful workflows.

One of the central capabilities of the biofoundry is DNA assembly. One of the most widely-used methods to assemble DNA is Golden Gate assembly that uses Type IIS restriction endonucleases.

Similarly to other restriction endonucleases, these enzymes recognise specific sequence motifs in DNA and introduce breaks. However, Type IIS enzymes cleave outside of their recognition site.

This means that DNA molecules can be joined together without scars (unwanted sequences) between them, and that they can be used to create libraries of standardised DNA parts that share the same overhangs, enabling them to be exchanged and compared in different assemblies.

Type IIS assembly reactions are highly efficient because digestion and ligation reactions can be performed concomitantly and cycled numerous times. They also allow multiple fragments to be assembled together in the same reaction, providing that each join has a unique fusion site.

The power of this is that different standard DNA parts can be assembled in a large number of combinations to find, for example, the optimal configuration of regulatory sequences to obtain the desired expression levels.

Assembly can also progress in stepwise iterations to first create different variations of transcriptional units that can subsequently be assembled into larger constructs - a useful application of which is to build metabolic pathways.

The Earlham Biofoundry is one of four such facilities in the UK. 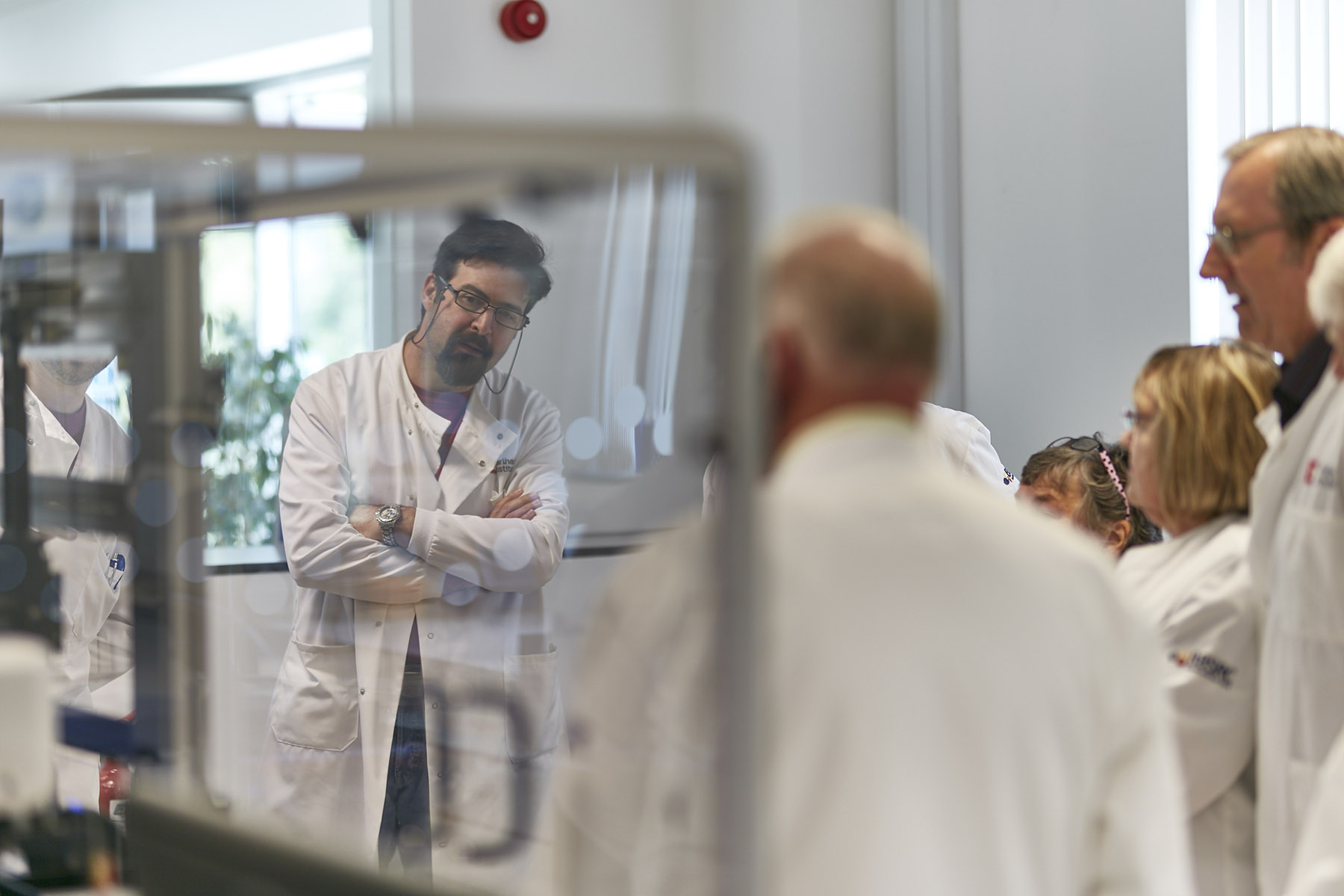 The level of innovation in which we are actually swimming all day long is incredible. The feeling of working in this field and being able to help others to solve their problems is amazing.

A look inside the Biofoundry

At the Earlham Institute we have numerous automation platforms to increase the throughput of samples and miniaturise reactions, saving time and money.

The protocols we are developing are being applied to a wide range of research projects, including assembling genome editing constructs for delivery to plants, creating and characterising mutations in structural proteins, optimising culturing conditions of engineered bacteria to increase yields, and automating bioactivity assays in order to screen munat libraries for altered activities.

The Arktic is an automated -80°C storage unit, the Arktic can store between 80,000 and 120,000 samples, depending on vial volume. Operationally, it works in a similar way to a vending machine.

The unit uses 2D-barcoded cubes, in a system of internal rotas. Instead of having to open the door and first find the right box, and then find the right tube, you can provide the barcodes of the tubes you need and it will retrieve them.

Tubes are arranged in 96-well racks according to your instructions. It continuously monitors the temperature and health of samples for optimal performance. 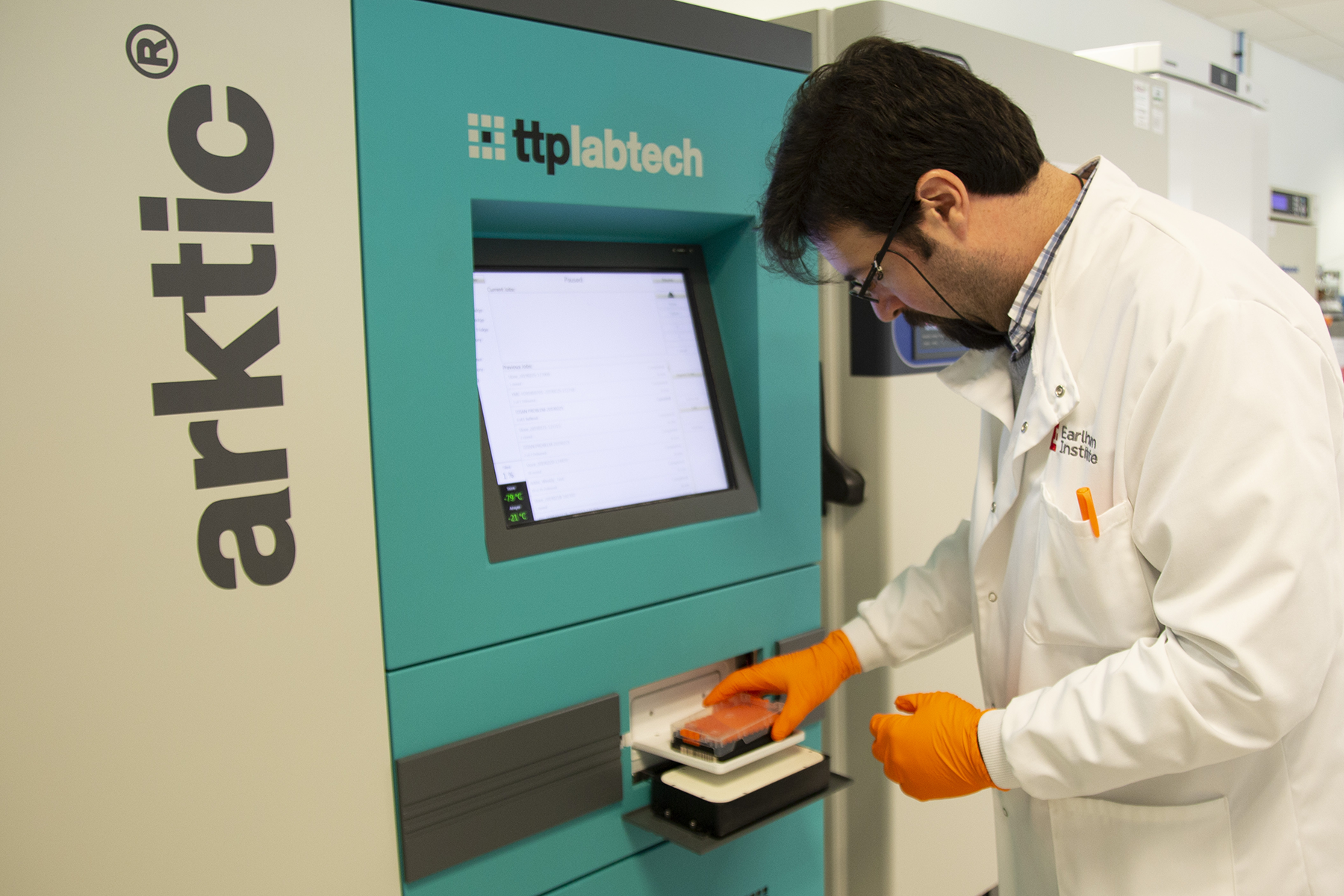 The Echo 550 is a liquid handling robot that, instead of using tips, uses the energy of sound waves to transfer droplets of liquid - or even cells.

The sound waves are focused on the surface of the liquid in the source plate. This stimulates precise nanodroplets (as small as 5nanolitres) to leap from the plate well and arrive at the destination plate, which is inverted above the source plate and moved to the correct position.

This instrument allows us to scale down the volume of PCR, sequencing libraries, and DNA assembly reactions by several orders of magnitude. For example, a DNA assembly reaction can be reduced from 20 microliters to less than a microlitre.The reduction in cost, time, and human error is significant. 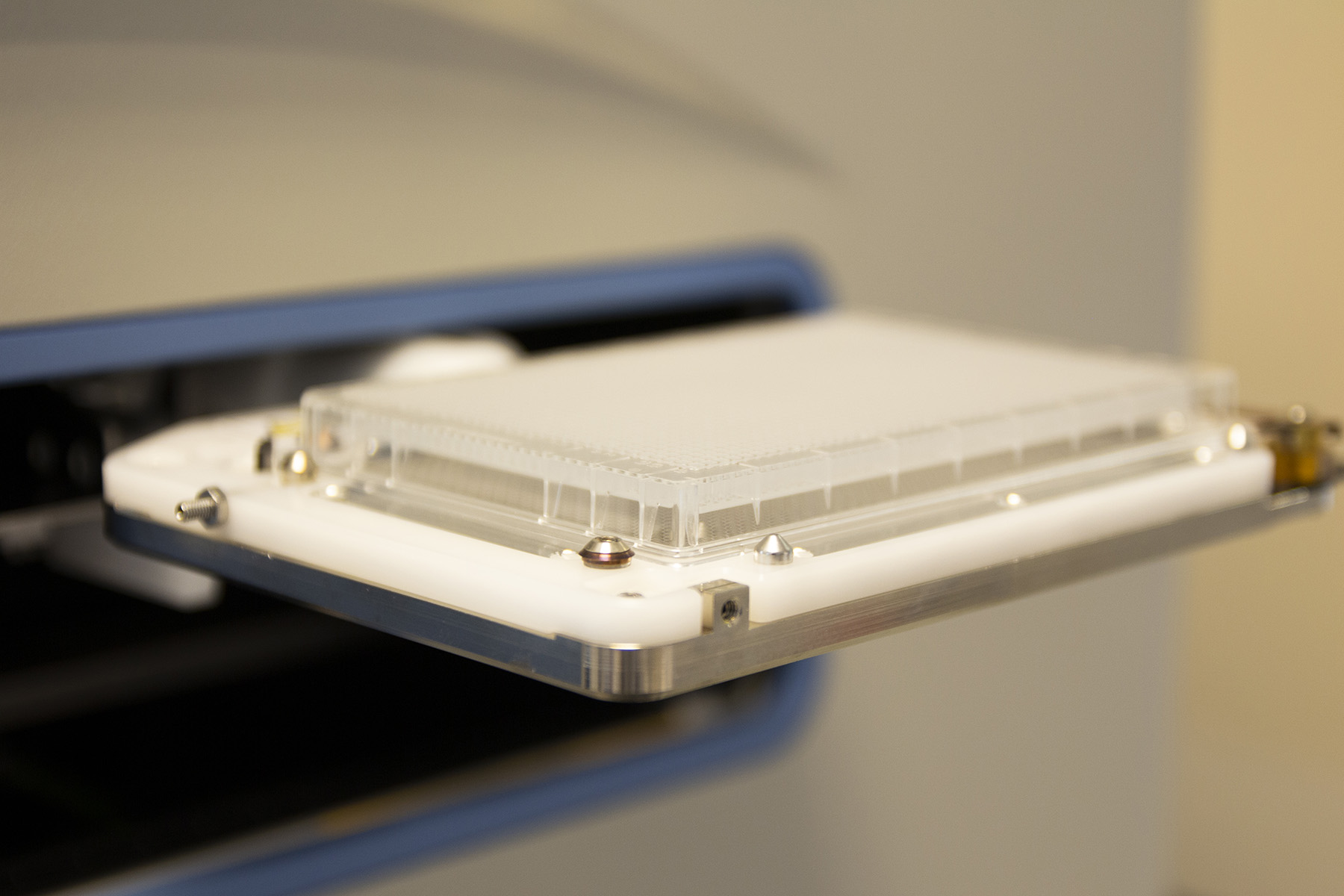 We have a suite of several small-footprint, easy-to-use automation platforms suitable for short protocols. Several of these platforms have a dedicated on-deck device, such as a heater or thermal-cycler, so they can be dedicated to performing frequently-used workflows.

The CyBio FeliX is a standalone automation platform that is especially useful for automating DNA/RNA purification workflows and the OpenTrons are low cost platforms with highly intuitive software and a Python application for developing workflows. We use these platforms not only to deliver projects but also to introduce life scientists to automation programming.

The Hamilton platform is versatile, flexible, and used for automating a very wide range of powerful workflows. The robots are used for high-throughput DNA purification, DNA quantification, and normalisation using the on-board plate reader.

In a collaborative project with a scientist at the John Innes Centre, the Hamilton platform was used to create an automated workflow for screening microbial interactions and microbial growth inhibitors.

The whole process - library screening of 3000 colonies (11 hours), growth assay (10 hours), imaging and selection of candidates (5 days), validation of candidates (1 day), incubation (5 days) and identification of candidate genes using PCR and sequencing (2 days) - allowed the results to be generated in just a few weeks, instead of doing months of manual experiments.

Recently, we have created a new automated workflow to study signal peptides with collaborators at the University of Oxford.

The BioLector Pro is an automated microfermentation platform that has online monitoring of biomass, pH, oxygen dissolved in solution, and fluorescence. It also provides the option of using microfluidics to feed the growth chambers, allowing the continual control of pH, nutrient or substrate levels, among other things.

We’re using this platform in an Innovate UK-funded project with Colorifix, a company based on the Norwich Research Park that aims to engineer bacteria for the sustainable production of dyes, for which the BioLector is being used to optimise growth conditions. 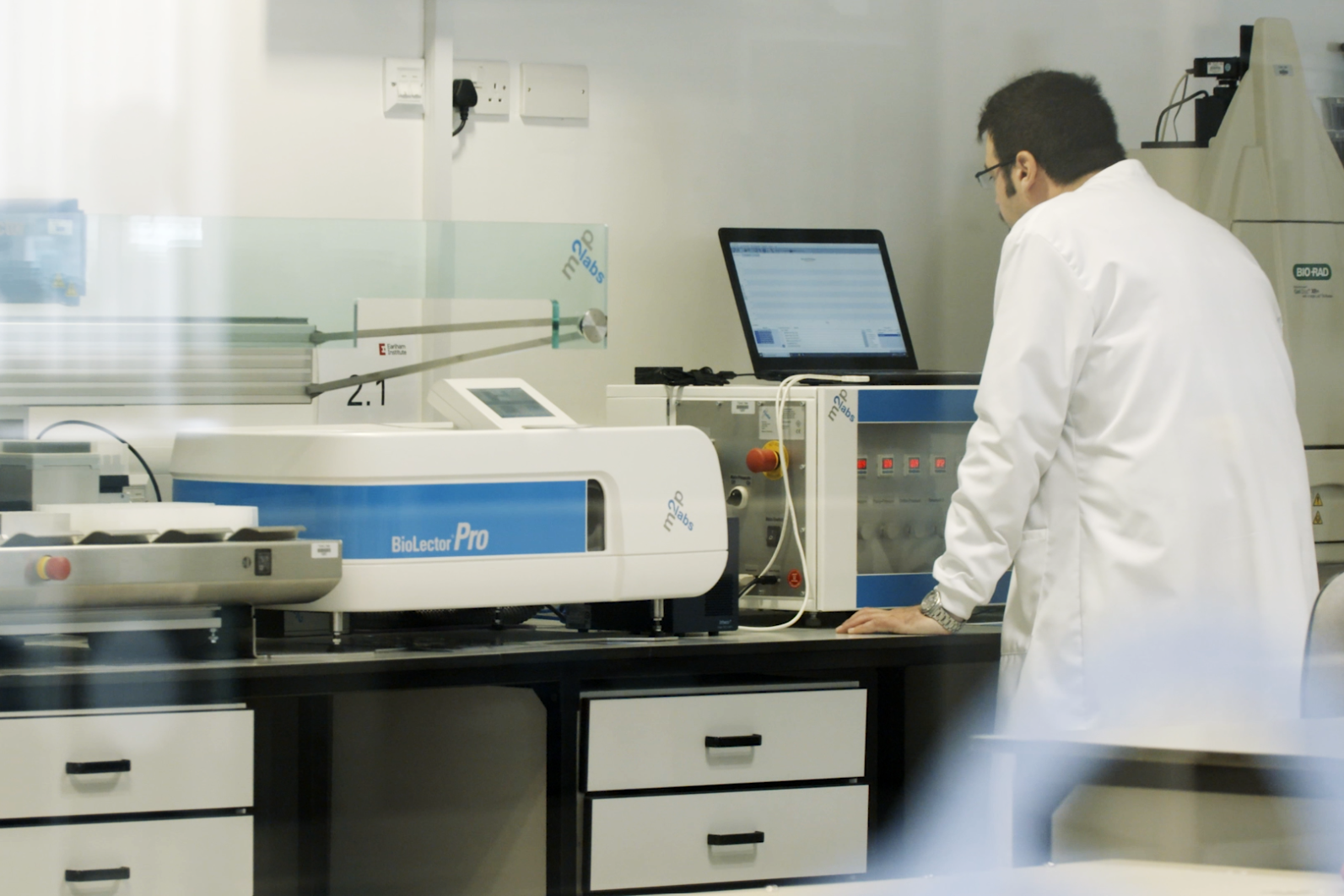 The K6 colony picker system is our newest piece of equipment that we are currently optimising. It allows us to identify, select and transfer up to 600 colonies per hour.

Even more ways to work with the Biofoundry

We already have a broad and interesting portfolio of automated protocols that are widely used in molecular biology. Many of these can be accessed as a service.

We work mainly collaboratively, contributing our scientific expertise and technical knowledge to a range of projects. We work with scientists from academia and industry to develop new methods, automate and scale-up workflows, and apply synthetic biology approaches to scientific problems.

We also provide training in laboratory automation through practical training sessions, laboratory placements, training courses, and by hosting collaborators within the Biofoundry.

Want to discuss a project?

To discuss applying automation to your project, or to get a quote for one of our automated workflows, get in touch.

Find out more or email Jose.Carrasco-Lopez@earlham.ac.uk