We are proud to boast an increasing number of PhD students at EI. Here, we focus on the work of Pilar Corredor-Moreno, who is working on wheat yellow rust - but from wheat’s side of the story.

Pilar recently presented her extremely aesthetically pleasing (and science-rich) 'Wheat Side Story' poster at the International Congress on Molecular Plant-Microbe Interactions in Portland, Oregon, US.

Such a hit was the poster, that it attracted much attention, including photographs from renowned plant pathologists such as David Collinge, Professor of Plant Pathology at the University of Copenhagen, who praised the poster:

“I do a lot of teaching PhD students and try to explain how they should try to stick out at large conferences. I was caught by the word play in the title - there has to be something to attract my attention when there are 700 posters. Apart from that I think it's an interesting subject having worked with barley powdery mildew for over 25 years.”

"I was caught by the word play in the title" David Collinge, Professor of Plant Pathology at University of Copenhagen. 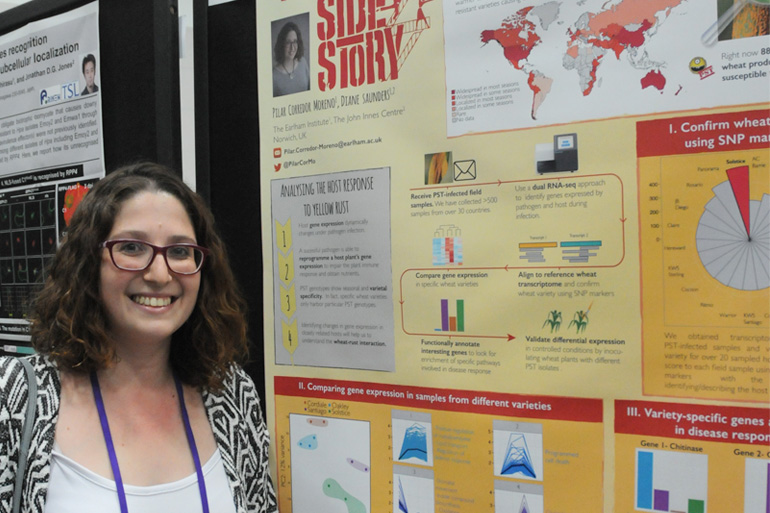 So what is Pilar’s Wheat Side Story?

A mere nine months into her PhD at the Earlham Institute as part of Diane Saunders’ lab, Pilar is already helping to unravel the secrets locked within the wheat genome.

In her words, “most people have been focusing on the pathogen side, but I’m more interested in the response of wheat, which undergoes a big transcriptome response - not only due to defense, but because the wheat yellow rust pathogen is reprogramming the wheat to serve its needs.”

This genetic reprogramming by pathogens is a common feature of many infections. A famous example is agrobacterium, a bacterial infection that usually implants genes into host plants, which then produce extra amino acids unique to the bacterium. Biologists have piggy-backed on this trick in order to insert specific genes of interest, rather than virulence genes.

Pilar specifically wants to discern the patterns that arise. Is there a pattern between gene expression in response to a certain strain of the pathogen? What is the response of the wheat plant? How do different wheat varieties respond to infection?

Similarly, how do we discern what genes are expressed by wheat plants as a stress response, and what genes are differentially regulated by the wheat yellow rust pathogen?

What is wheat yellow rust?

Wheat yellow rust is a devastating fungus (Puccinia striiformis f. sp. tritici) that is threatening wheat production on a global scale. There is not a major wheat-growing region that is unblemished by the disease, which can cause huge crop losses in susceptible varieties of wheat.

Historically, the pathogen was restricted to cool and wet environments. However, in recent years the pathogen has changed and new strains have emerged that are adapted to different climates and are able to infect previously resistant wheat varieties - resulting in increasingly destructive pandemics.

Currently, 88% of the world’s wheat varieties are under threat from this pathogen - and with wheat making up 20% of global calories - this is an important cause for concern for global food security.

88% of the world’s wheat varieties are under threat from this pathogen - and with wheat making up 20% of global calories - this is an important cause for concern for global food security.

Wheat we want to know.

Pilar stresses that this work is of vital importance, and is allowing us to ask questions that no-one has really been able to pose before.

“Work on plant-pathogen interactions and defence has traditionally been done in Arabidopsis. However, we now have an increasingly well-assembled wheat genome available, as well as the genome sequences of many other important plant species, so it’s time to embrace new models.”

Pilar is right. As much as we can glean a lot of information from Arabidopsis, sometimes you have to go straight to the source.

“It’s like looking for human disease genes in mice: It can yield useful information, but it’s not going to work in exactly the same way all of the time.”

Wheat we hope to find.

Pilar has made great progress in her first year of study, with results indicating several important genes that are differentially expressed in different wheat varieties in response to wheat yellow rust.

Using web browsers, such as expVip: Wheat Expression Browser, developed by Ricardo Ramirez-Gonzalez - another PhD student at the Earlham Institute - she can compare these with genes that have already been implicated in wheat responses to disease.

Armed with this information, Pilar is now aiming to hit the laboratory and experimentally confirm some of her initial findings by infecting wheat strains with yellow rust.

This will allow the analysis of expression profiles under controlled conditions, confirming results gained from the field and targeting disease-specific gene expression. This type of analysis is important, as wheat plants grown in the field face a suite of other biotic and abiotic factors not limited to infection by pathogens.

The Wheat Side Story is only just beginning to unfold.

The ultimate aim of the project is to better understand what happens to a wheat plant, genetically speaking, in response to wheat yellow rust.

As the project lies in relatively untrammelled ground - the eventual results are a mystery - the Wheat Side Story is only just beginning to unfold.

However, it is possible that we may discover elements that can be harnessed to protect wheat in future breeding programmes, while simultaneously shedding important light on how one of our most important crops responds to one of our most pesky of pathogens.