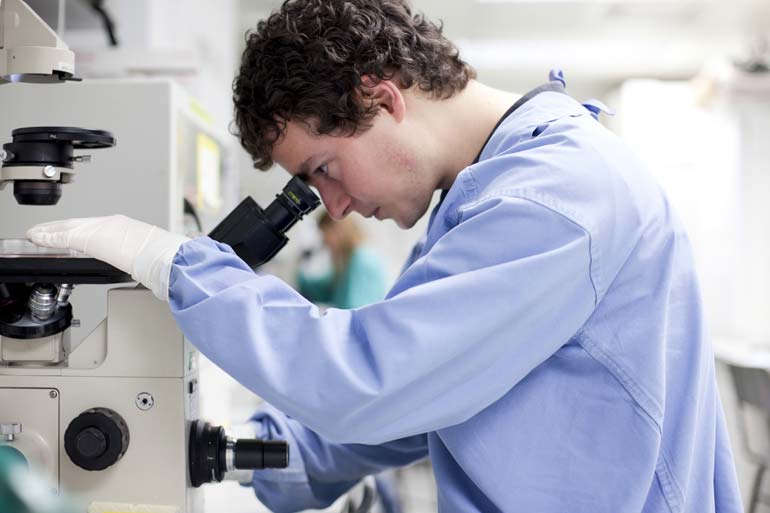 Scientists have begun to unlock the genetic code to understand how the lining of the bladder functions as a barrier to store urine - paving the way for possible new treatments for chronic bladder diseases such as interstitial cystitis and cancer.

Using human cells, they have mapped how different proteins bind the DNA to control which genes are active during barrier formation.

The inside of the bladder is covered by a specialised epithelial cell lining called the urothelium, which functions as a self-regenerating barrier to urine.  The delicate balance between urothelial tissue repair and specialisation becomes disrupted in chronic diseases of the bladder.

A study, led by the University of York in collaboration with the Earlham Institute (EI) and published in Nature’s Cell Death and Differentiation, uses lab-grown normal human urothelial cells to investigate the process of urinary barrier formation.

Cells of the body carry the same genetic code in the form of DNA, but epigenetic programming means that different sets of genes are used to make different specialised tissues.  Which genes are active in a particular tissue is partly decided by proteins called transcription factors (TFs)1 which bind the DNA and control whether genes are switched on or off.

The York research team had previously shown that human urothelial cells could be grown as non-specialised cells in the laboratory to form a functional barrier.  They had found that some of the important genes involved in this process encoded TF proteins, but had assumed that all TFs acted together and in the same direction.

Using a bioinformatics approach to TF binding to the DNA, the Earlham Institute revealed that the TFs are actually arranged in a more complex or non-hierarchical pattern, where some may even compete for binding to the same DNA regions at different stages of the cell specialisation process.

Lead author of the study, Professor Jennifer Southgate, Director of the Jack Birch Unit of Molecular Carcinogenesis (JBUMC) in the University of York’s Department of Biology, said: “Using experimental methods to silence individual TF genes, we confirmed that TFs interact to define whether cells become specialised or non-specialised. In particular, we have shown one TF (called P63) is dominant in the non-specialised cells.

“It may sound esoteric, but it really is important to understand this process, particularly which transcription factors bind where and when, as this information provides the key to manipulating stem or precursor cells to form fully functional tissues for use in restorative medicine.

“This understanding of how TFs drive cell specialisation decisions will also help guide the search for drugs which can transform urothelial cell states as a therapeutic option.”

Dr Janet Higgins in the Swarbreck Group at the Earlham Institute, who led the study’s bioinformatics analysis, said:  “Using specialist sequencing-based strategies and next-generation platforms within our Platforms and Pipelines Group, supervised by Lawrence Percival-Alwyn, we worked together with the Jack Birch Unit (JBU) to investigate the in-depth actions of the different TFs across the whole urothelial genome, by mapping their protein-binding activity along the DNA.”

The urothelial experiments were designed and carried out by Dr Carl Fishwick as part of his PhD at the University of York, using the normal human urothelial (NHU) cell models developed in the JBU.   From the data generated, EI able to identify transcription factors and chromatin (protein/DNA compound) dynamics driving cell differentiation, some of which were confirmed in further experiments in the JBU.

This research was funded by BBSRC and York Against Cancer. Carl Fishwick was a PhD student funded a BBSRC CASE studentship with GSK.

• The same DNA sequence (the 'genome') carries the code to make all the different types of specialised cell in the body, such as the skin, liver, or bladder urothelium. Different cells are programmed use different sets of genes, including genes that encode transcription factors. These different genes are translated and transcribed into proteins.Transcription factor proteins bind to DNA and define which genes are active or not. They are therefore instrumental in programming cells to become specialised.

3) Accompanying images, descriptions and credits can be accessed by Dropbox.