Aphids are a nuisance, especially ones which can adapt to hundreds of different plant species. Perhaps long non-coding RNA helps them to do it?

Aphids are a nuisance, especially those with a diet that includes hundreds of different plant species. Earlham Institute's Dr Archana Singh has discovered a whole new family of long non-coding RNAs, including a new virulence factor gene, that perhaps contributes to this insatiable appetite.

Whether it’s under the guise of blackfly, greenfly or plant lice, aphids are pestilent insects that feed on the sap of plants. Many species are named after the single plant they feed on, such as the woolly beech aphid, but not all have such restricted diets.

Dr Archana Singh, a postdoctoral scientist in the Swarbreck Group at EI, has identified a whole new family of long non-coding RNA (lncRNA) genes in aphids. One of these genes, among a family of 30, appears to play a pivotal role in helping the green peach aphid (Myzus persicae) colonise and ravage the model plant species Arabidopsis thaliana, and perhaps offers an insight into one of the ways this pest can colonise so many species of plants.

“It’s amazing to get such an unexpected result, when we were initially investigating something quite different,” Dr Singh says of her latest paper, which began with her work in the Hogenhout lab at the John Innes Centre and continued on as she joined EI.

Probing this new gene family in more detail might help us to tackle one of the most potent threats to agriculture worldwide.

It’s amazing to get such an unexpected result, when we were initially investigating something quite different.

The green peach aphid is an utter bane to farmers and gardeners alike. The reason? There are more than 500 aphid species in Britain and most are fussy eaters, dining out on only one or two species of plant. Unlike other sap suckers, the green peach aphid is a generalist, happily adapting its diet to include hundreds of different plant species.

This is unfortunate for a number of reasons; green peach aphids are hard to defend against, they carry a host of viruses that cause crop losses, and they’ve even shown some resistance to neonicotinoid pesticides (and a whole lot of others besides).

That’s why scientists such as Dr Singh are so interested in aphids. Admittedly infuriating to some, they’re also incredibly interesting. How on earth do they manage to adapt to so many different plant species? And, critically, how do they become so readily resistant to pesticides?

It’s made all the more fascinating by the fact that aphids reproduce mostly asexually, meaning that for most of the year it is genetically identical clones that are managing to adapt to all of these different plants.

By understanding more about how aphids manage to colonise different plants, Dr Singh is hoping to find new ways of fighting them off our crops and gardens. 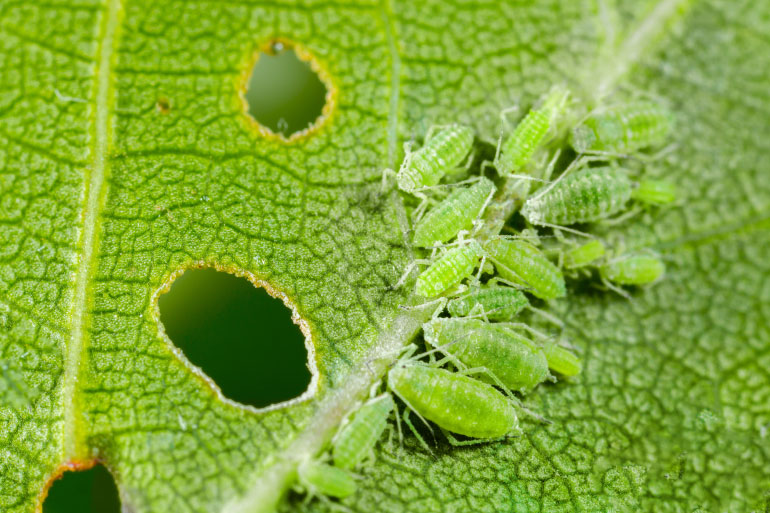 They’re hard to defend against, they carry a host of viruses that cause crop losses, and they’ve even shown some resistance to neonicotinoid pesticides.

Attack of the clones

It took the clones varying lengths of time to establish themselves on different species, taking longer to get over the heavy doses of nicotine on a relative of tobacco. Once established, however, Dr Singh could get to work exploring the genes involved in helping each of these colonies thrive on their different hosts.

What Dr Singh really wanted to understand was the host adaptation pathway in the green peach aphid that allows the insect to colonise so many different plants. What are the different genes involved? She began by performing a transcriptomic analysis to hunt for genes that were differentially expressed in aphids, dependent on the host plant.

Now came the difficult part of choosing which module to go with. Thankfully, however, before running the transcriptomic analysis, she had taken the time to first of all annotate some lncRNAs - elements of the genome which do not make proteins but have a regulatory effect on gene expression and are being shown to have wide evolutionary significance.

It transpired that one of the modules was formed of lncRNAs. Not only this, the genes within the module all seemed to show at least 80% sequence similarity. Could they be a whole new family of genes?

It transpired that one of the modules was formed of lncRNAs. Not only this, the genes within the module all seemed to show at least 80% sequence similarity. Could they be a whole new family of genes?

Annotating homologues can be difficult, so Dr Singh manually annotated them and discovered something yet more exciting. This new family of lncRNAs had been duplicated 30 times, existing as tandem duplicates in the genome.

Investigating this further, the team discovered that not only were the lncRNAs present in host plants at the feeding site, they were also widely dispersed throughout plants. When the team made transgenic plants which overexpressed the aphid lncRNA, the aphids had a field day - colonising plants better and producing more young.

The team then used RNA interference (RNAi), a technique that ‘knocks down’ genes by introducing a small strand of RNA which targets a complementary strand for destruction, in the plants. This was designed to act against the lncRNA after being eaten by the aphids, which lowered their ability to reproduce.

Essentially, the team had discovered a lncRNA that migrates from the aphid and into the plant, helping the aphid to colonise it - perhaps across all of the different hosts studied. Not only had the team discovered a whole new family of lncRNA genes, they’d discovered a new virulence factor to boot.

When the team made transgenic plants which overexpressed the aphid lncRNA, they noted the aphids ate even more - almost literally having a field day.

The obvious application of this research would be to use this information to develop new targets for aphid management. However, Dr Singh says: “first, we need to understand what the lncRNA is doing in the plant. What’s it targeting? What is the pathway?”

The next step will be to investigate the mechanism of action of this lncRNA in multiple plant species, including the model plant Nicotiana benthamiana as well as numerous species which comprise the host range of Myzus persicae. The team is also eager to understand where this duplication came from and how it occurred.

In the future, Dr Singh is excited to explore yet more facets of what make aphids such abominable pests. This will include work into how they ‘remember’ hosts, and perhaps pesticides, through exploring their epigenetics.