Why conservation must be at the forefront of the conversation.

Biodiversity is the sponge that soaks up carbon - locking it away in trees, cycling it through food chains, and sequestering it deep in the Earth’s seas and soils. In the face of catastrophic climate change, human activity is putting biodiversity in greater peril than ever before.

That’s why Earlham Institute scientists are exploring nature’s vast carbon reservoirs, capable of absorbing our emissions, ameliorating the worst effects of our climate crisis, and keeping us fed and watered.

Meadows that once thrived have made way for vast, chemically sterilised monocultures. The soils that once supported these wildlife havens now pickle in the leached agrichemical dregs, which pollute rivers and oceans as they’re washed away.

Rainforests, once teeming with life, stand as charred remnants as they’re hacked down to accommodate our ceaseless expansion. Once regarded as the lungs of the Earth, they now act as a net contributor of CO2 - slashed and burned to make room for plantations and mines.

Everywhere you look, there is evidence of our steady encroachment into what remains of our natural world. And, if we’re serious about tackling climate change, Earlham scientists show us that we must put biodiversity at the forefront of our minds.

“There was a time when meadow, grove, and stream,

The earth, and every common sight,

To me did seem

The glory and the freshness of a dream.

It is not now as it hath been of yore;—

By night or day.

Our ability to reach net zero heavily rests on the capacity of governments to implement carbon capture mechanisms to trap emissions at the source. Yet biodiversity comes fully equipped with the tools to soak up plenty more besides - if we can just allow it to thrive, rather than continue to exploit and destroy it.

A read through of the latest technologies being announced ahead of the COP26 meeting in Glasgow focuses on giant, complicated machines and complexes designed to trap carbon dioxide released from heavy industry and store it in rocks under the sea, or other such places.

One interesting example exists in Yorkshire, where a power plant that formerly burned coal now purports to produce green energy, and a carbon capture facility alongside it. Its credentials appear less green when you discover the plant reportedly now burns wood chips imported from the USA.

Meanwhile, Dame Judi Dench and others point out that we already have some pretty decent carbon gobblers in the form of the very same trees being chopped down to fuel such formerly coal-fired power stations.

It’s likely that carbon capture in this way will be better than what we had been doing, but there are obvious pitfalls in an over-reliance on this technology. For a start, there’s not nearly enough of it around - nor is the technology sufficiently advanced - for us to meet our net zero goals for 2050.

Tree planting, too, is fraught with complications. It’s only truly beneficial if we can plant the right species to rejuvenate biodiverse ecosystems, rather than producing relatively lifeless monocultures. Planting the wrong trees in the wrong places can be disastrous.

According to FAO, forests cover 31 percent of the global land area. 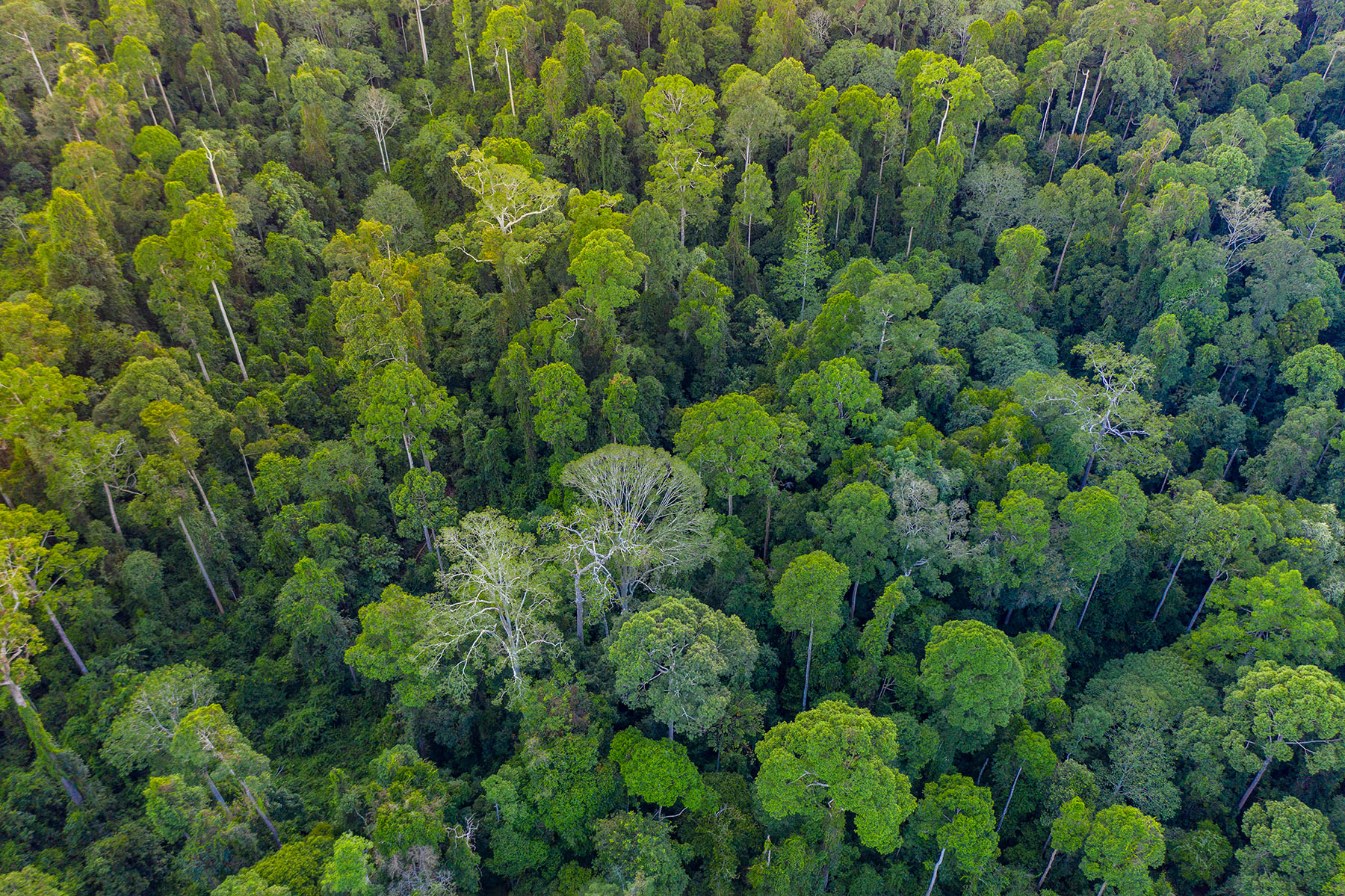 Perhaps we should invest equally in what’s right beneath us.

That’s the argument in a recent article from Mongabay, which points out that 80% of the carbon stored on land can be found in our soils. Yes, trees are very efficient at capturing CO2, but healthy soil is what allows that to happen.

Biodiverse soils are particularly important, as it’s the cocktail of bacteria, fungi, protists, archaea, nematodes and earthworms that keep plants thriving in diverse ecosystems. They help power the nutrient cycling process that keeps plants nourished with nitrogen and able to sequester all the more carbon dioxide from the air.

The Earlham Institute’s Dr Nasmille Larke-Mejía is intimately aware of this issue, telling the EDP recently that “the amount of sterile soil is increasing year on year… Soils are living, dynamic systems that are very sensitive to environmental pressures like climate change, rain and erosion – but they're also sensitive to things we add.”

She’s hoping to tackle a huge problem in soils, that of declining diversity due to the addition of agrichemicals and other pollutants. A knock-on effect of this is that our crop plants are less capable of fending off disease, as the natural defenses that a biodiverse soil provides to plants is eroded.

In searching for healthier soils, Dr Larke-Mejía has also noticed how formerly saprophytic fungi - much like the ash dieback pathogen researched by Dr Mark McMullan and colleagues at the Earlham Institute - have become pathogenic on coffee plantations. Perhaps it’s a lack of soil diversity that fosters conditions for these pathogens to take hold in the first place.

While Larke-Mejía, McMullan and colleagues are investigating the root cause of such agricultural pathogens, it’s likely that fostering healthier soils is a better long-term solution to disease control - and preventing pathogen outbreaks in the first place - than wantonly spraying pesticides.

VIDEO: As Dr Larke-Mejía says in this video, "we are owners of our land and decide what goes in and what comes out of that."

From the soils to the skies, the ash clouds from Australian wildfires shrouded parts of the globe in a veil of smog in the early months of 2020. Where the dust eventually settled, algae proved their worth as the world’s most overlooked gobblers of carbon dioxide.

Most of the CO2 released from these fires was eaten up by algal blooms, which thrived on the minerals deposited in the ash. While that’s a success story of the capacity of the Earth to offset some of our emissions, it’s not all rosy - particularly when you consider that rose-tinted seas formed by toxic algal blooms pose a hazard to other life, including us.

While a natural occurrence and part of a yearly cycle, algal blooms are intensifying in certain regions due to the leaching of fertilisers into our oceans. In particular, this is causing expanding ‘dead zones’ to appear around river estuaries.

Elsewhere, shifting temperatures are causing populations of algae to change, as those adapted to cooler temperatures drift further north. PhD students Anthony Duncan and Emma Langan have been tracking those changes at the Earlham Institute, which will be important in helping model the effects our polluting ways are having on the seas.

All the while, our once-vibrant coral reefs - another ecosystem underpinned by healthy algae living in symbiosis with polyps - are being bleached by rising CO2 levels in the oceans. This visible change shows the strain our actions are putting on one of the most biodiverse ecosystems on the planet, and crucial breeding waters for fish.

Moving back onto dry land...

These drastic changes to marine ecosystems, combined with our proclivity to trawl the ocean floor in search of diminishing returns of seafood, will have profound effects on our ability to fish in years to come. Many ocean fisheries are on the brink of collapse.

That’s why more people are looking inland to freshwater aquaculture. But, for biodiversity, that’s also fraught with potential peril.

Take the cichlids of East Africa, which exist in a dazzling array of shapes, colours and habitats. This variety is borne from adaptive radiation in the multitude of ponds, streams, rivers and lakes of that great continent. These fish populate aquarium tanks, but also the ponds of fish farmers, who rely on tilapia as an increasingly important food source.

The danger for biodiversity is that farmed fish tend to be imported, yet can escape into the wild. Native tilapia, of which there are dozens in Tanzania alone, are known to hybridize with these introduced fish, which Earlham Institute scientists such as Dr Adam Ciezarek have been working to understand the effects of.

One fear is that these native fish are often well adapted to local conditions, and perhaps stand to lose some of that specialisation. Conversely, hybrid fish might also interfere with local breeding programmes. Keeping wild fish and farmed fish apart may be crucial for sustaining both aquaculture and biodiversity alike.

There are several reasons why, as we negotiate a warming world, this is important. Highest on the agenda is making sure our freshwater fish can survive in ever-decreasing resources, a scarcity of which threatens us all. Increasing the productivity of such systems in a sustainable way is therefore essential.

VIDEO: Able to rapidly evolve to a wide range of environments, could cichlid fish help us understand how different species might adapt to changing climates?

Take a walk through nature...

Our soils, seas, inland lakes and rivers are clearly crucial for maintaining food security, and allowing them to prosper can help us to mop up emissions. But they’re more important than just that.

Biodiversity sings to our very souls, as poets and artists over millennia can attest. Time spent in nature is not only good for our minds and wellbeing (and as Earlham researchers prove, the source of untapped medicines), but for creativity.

It’s pleasant to imagine, as we move into what may well be a decade of restoration of nature, that spending more time in it could well inspire our minds with the solutions to keep biodiversity and humanity thriving side by side for millennia to come.

Forebode not any severing of our loves!

Yet in my heart of hearts I feel your might;

I only have relinquished one delight

To live beneath your more habitual sway.

I love the Brooks which down their channels fret,

Even more than when I tripped lightly as they;

The innocent brightness of a new-born Day

The Clouds that gather round the setting sun

Do take a sober colouring from an eye