We are losing the battle against antimicrobial resistance (AMR). The backbone of modern medicine is being taken for granted - decades of complacency and misuse mean antibiotics are becoming less effective and bacterial infections more deadly.

We are losing the battle against antimicrobial resistance (AMR). The backbone of modern medicine is being taken for granted - decades of complacency and misuse mean antibiotics are becoming less effective and bacterial infections more deadly.

The World Health Organisation warns that we’re entering an era in which antibiotics will no longer work for previously routine procedures, resulting in needless deaths from infections and conditions previously considered manageable and not serious.

In 2014, the UK Government-backed O’Neil report stated that deaths directly attributable to AMR will be the largest global killer by 2050.

Normally associated with an over-reliance on - or misprescribed - antibiotics in a clinical setting, AMR is just as big a concern in farming. The role of antibiotics in the food industry raises issues around animal welfare and the world's increasing demand for cheap meat, not to mention the risk of antibiotic-resistant strains of bacteria jumping between species.

This article forms part of our Marrying Microbes: in sickness and in health series exploring the topic of health research.

Referred to as a ‘void of antibiotic discovery’, it has been 30 years since the last antibiotic was developed for large-scale use. While there have been extensive efforts from the field of synthetic chemistry to develop new medicines, most antibiotics in clinical use are either natural products or derived from such products - the result of evolution by natural selection.

Does this mean evolution is the answer to producing new, more effective treatments?

We speak to Dr Matt Bawn, AMR expert based at the Earlham Institute and Quadram Institute, on what the fallout means for public health and how our science could inform potential new antibiotic treatments.

Antibiotics are drugs that have been designed to kill infection-causing bacteria within the human body, while at the same time not causing any harm to the host. For them to work, the treatment has to have a very specific genetic target that is in the bacteria and not the person, and must be ingested and reach the site of infection at sufficient concentrations to kill the bacteria.

Bacteria can develop resistance if the target gene of the antibiotic changes or if the concentration of antibiotic the bacteria experiences is reduced. It’s been shown that having small quantities of antibiotics in general, make bacteria share parts of their genomes with each other - often genes that confer resistance to antibiotics - in a process called Horizontal Gene Transfer (HGT).

By flooding our environment with low-concentrations of antibiotics, we may be encouraging the transfer of these dangerous bits of genomes among different strains of bacteria and increasing the spread of AMR.

Genetically, there are two main ways bacteria may become resistant to antibiotics: Mutation, when the DNA sequence of the bacteria changes in a region that makes the bacteria more resistant; and HGT where susceptible bacteria gain new genes from other bacteria that confers resistance.

If we imagine AMR in an evolutionary context to be a game of snakes and ladders, played by the bacteria; the mutation is the steady movement along the game board while HGT is a ladder, giving the bacteria a sudden boost towards the finishing AMR square.

Can genomics research stop providing a ladder boost to AMR?

HGT is a huge issue. AMR genes can very quickly be shared between bacteria of often different species. Frequently, AMR genes are maintained on fragments of DNA that can contain multiple genes and therefore confer resistance to multiple antibiotics.

HGT events can range from a couple or hundreds of genes, often contained in a self-replicating machine called a plasmid, or contained within an island of factors that increase the bacteria's pathogenicity.

Public health surveillance uses genomics firstly to identify the cause of an infection - the species or strain of bacteria that is causing illness. Whole genome sequencing (WGS) through short-read sequencing has become the de-facto standard for this. It is relatively easy, once you have the genome sequence, to look for specific AMR genes and infer the AMR profile, we call this in-silico phenotyping. There are also new ways of sequencing, for example, using Nanopore long-read sequencing to specifically target AMR containing plasmids.

When you take broad spectrum antibiotics to try and kill a bacterial infection that might be in your stomach, for example, you are wiping out and resetting your natural microbiome, a key line of defence against bacterial infection. This creates an opportunity for pathogens that wouldn't normally cause an infection to take hold and replicate in your body.

Before penicillin was discovered in 1928, bacterial diseases were wiping out populations - for example one sobering thought is that 90% of children that developed bacterial meningitis died, but the wide-scale production and deployment of antibiotics let us live without fear for the first time in human history.

Today, increasing numbers of people are dying from blood poisoning - sepsis is currently the largest killer of people in the world, and responsible for one in five deaths. Increasing AMR will only make this problem worse.

The use of antibiotics in food production is also a crucial issue for AMR. According to an assessment by researchers at the Chinese Academy of Sciences, China consumed nearly half the world’s antibiotics in 2013 — around 162,000 tonnes - just over half of which was administered to animals.

In the past antibiotics were often used as growth promoters; to increase the amount of meat rather than to treat illness in the livestock. Although the use of antibiotics as growth promoters is now banned in most countries, there is a concern that economic concerns could drive unscrupulous farming practices. Also even when farmers legitimately use antibiotics to treat infections in animals, they are often administered to the whole herd rather than targeted infected animals.

Whenever you take antibiotics either correctly or not, they ultimately end up in the environment. Studies have found antimicrobial resistance genes nearly everywhere we have looked, from nearly every Chinese River, to the remotest regions of the Amazon.

There are many ways we all unwittingly contribute to the spread of AMR: not taking our medication as prescribed, taking someone else’s prescription or using antibiotics when we have a viral infection, in which case, your bacterial antibiotics are not going to work - all of these just make bacterial disease harder to fight.

We, as humans, use vast amounts of antibiotics that all ultimately find themselves in the environment in far smaller concentrations than those intended for therapeutic use.

For an individual infection, we are able to kill resistant bacteria if we have antibiotics that are effective against it. However, for antibiotics to kill bacteria and stop an infection they have to be delivered at a sufficient concentration. If bacteria experience antibiotics below this concentration, they are not only able to survive but antimicrobial resistance spreads.

The effects of these sub-inhibitory concentrations of antibiotics - on not just individual bacteria causing infection but on bacterial populations is not well understood and is the focus of my work.

In many cases, it seems that we are pushing bacteria to become more virulent and hard to control, which has huge implications for public health.

This is something that we looked at with our initial work examining the gene mutation landscape under weak selection; a constant background of low concentration antibiotics. We have already started the follow-on experiment moving into strong and fluctuating selection to more accurately model the dynamics driving AMR in clinical settings.

We also plan to look at the evolution of AMR within bacterial biofilms which are tumour-like bacterial communities driving HGT, and to examine how AMR plasmids are transferred and maintained by evolving populations.

Eventually we hope to develop the technology and methodology so that it can be more easily and rapidly applied to a wide-range of clinical questions, such as the effects of phage-therapies in treating bacterial infection, using different antibiotics in conjunction with others, or evolution in more complex pathogenic communities.

Phages are viruses that naturally live in and or attack the bacteria. Phage therapy involves using these viruses as targeted methods to kill the infection causing bacteria, and stop the infection.

By studying the evolution of the bacteria, we can potentially predict the consequences of potential antimicrobial treatments before we use them on a large-scale.

To inform policy and help reduce the spread of AMR, our research hopes to understand how antibiotics shape bacterial evolution.

Our initial results suggest that small quantities of antibiotics, rather than killing pathogenic bacteria, actually increase their genetic diversity - making the bacteria more adaptable to new environments and treatments.

Beyond these findings our work brings together the cutting edge of genomics technologies, namely single cell sequencing, and innovative computational methods to provide a new toolkit for researchers to probe the dynamics of populations and bacterial ecosystems at an unprecedented resolution.

We hope this will allow us to better understand the longer term consequences of new antimicrobial therapies and inform intervention strategies, but also to examine how existing treatments could be better applied to extend their usefulness and create a sustainable antimicrobial landscape.

Can we win the fight?

Here at EI, I think we've got many elements in place where we can make a difference. Our computational biology expertise and big data approaches which are not restricted to analysis from a few strains, but instead, looking at all of the available data. This deeper analysis will enable us to test hypotheses with emerging new technologies, leading to informed treatments.

This combined with the fact that because we're an Institute and we have large scale collaborations, we have an international voice that we can use to speak to policymakers.I also think public engagement is our duty of care to society to break down our research so that everyone can understand it. As scientists, we must try and simplify what we do and tell as many people it’s significance and they can use that knowledge to help.

For every human cell in your body, there are ten times that number of bacterial cells. So when we think of ourselves as just as a human being walking through the world, we're carrying around our own microbial communities. What we're starting to see now is how those different communities affect us as humans, our decisions and our health. 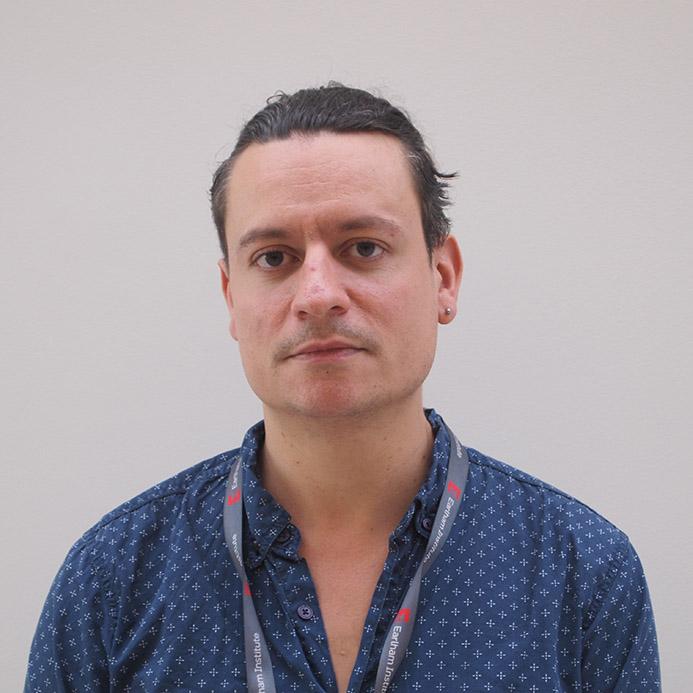 From the beneficial bacteria making up a healthy microbiome to the deadly parasites that afflict millions worldwide, microbes play an integral role in sickness and in health.
Image
05 April 2021
Science
FEATURE | 8 min READ

After viruses, it’s the second biggest cause of sexually transmitted disease in the world - but though you may have heard of gonorrhoea, syphilis and chlamydia, trichomonas is a pathogen that seems to sneak under the radar.
Image
13 April 2021
Science
FEATURE | 20 min READ

We speak to two of our microbiome experts, Dr Chris Quince and Dr Falk Hildebrand, on the future of microbiome health and how the Earlham Institute is influencing the microbiome science and innovation UK landscape.
News
Image

The Earlham Institute is delighted to announce the appointment of Professor Chris Quince as its newest Group Leader.
Image

Dr Falk Hildebrand has won a €1.5 million grant from the European Research Council (ERC) to research the role that lesser known microbes play in the gut microbiome and human health - addressing fundamental gaps in our understanding.
Image

A £2m funding award will help an international team, led by scientists at the Earlham Institute (EI), to understand and prevent the spread of non-viral gastroenteritis, potentially saving lives in parts of the world where access to clean water is limited.