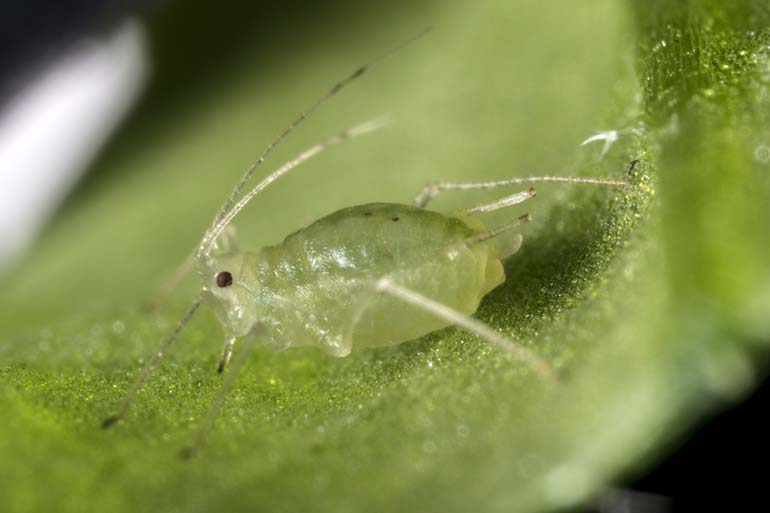 UK Scientists, in collaboration with groups in Europe and the US, have discovered why the green peach aphid (Myzus persicae) is one of the most destructive pests to many of our most important crops. Their research will inform industry and research programmes to support pest control and aid global food security.

Unlike most plant-colonising insects, which have adapted to live on a small range of closely related plants, green peach aphids can colonise over four hundred plant species. Developing to over 70 different pesticides, coupled with the ever changing climate affecting crop losses in the EU and UK, the wreaks havoc on crop yields.

The green peach aphid transmits over a hundred different plant viruses and this notorious insect feeds on essential crops such as oilseed rape, sugar beet, tomato and potato, as well as wild plant species, which may serve as sources of the plant viruses. An example being the Turnip yellows virus (TuYV) and related viruses, which if left uncontrolled can reduce of multiple crops, such as oilseed rape and sugar beet, by up to 30%, rendering some crops unprofitable in the UK.

The aphids spend winter living on host plants such as peach, apricot or plum, but in the summer months can colonise a huge range of vegetables - from potatoes to spinach, squash, parsley and parsnip.

Generally, the insect parasites that live on a certain species are genetically very well adapted to live on just that plant. Yet, research led by the Earlham Institute (EI) and the John Innes Centre (JIC), has found that the green peach aphid foregoes this specialisation for a more flexible approach involving turning gene activity ‘up’ or ‘down’ in response to different plant hosts and environments.

Dr David Swarbreck, Group Leader at the Earlham Institute, said: “Our study has shed light on the genetic plasticity1 that allows the green peach aphid to survive so well on a multitude of plant species, giving us a greater insight into the survival strategies of one of the most challenging of crop pests.”

More intriguing about the insect's strategy is that aphids can reproduce clonally - i.e. they produce genetically identical lineages. This allows biologists to compare individual aphids with the same genetic background and see precisely what genes are more active than others in aphids living on different plant species.

By growing aphid clones three different plant species, it was possible for the scientists to find the specific genes that were involved in colonising the different host plants. It appears that the genes responsible for helping aphids adjust to different plants are found in clusters within the genome and are rapidly increased or decreased in two days of transfer to a new host plant species.

Dr Yazhou Chen, Postdoctoral Scientist at the John Innes Centre, said: “The genes rapidly turn up or down in single aphids in just two days upon transfer to a new host plant. Given that a single aphid can produce her own offspring, and a lot of it, new aphid infestations may start with just a single aphid.”

The team found that rapid changes in gene expression were vital for the green peach aphid’s generalist lifestyle. Interfering with the expression of one particular gene family, cathepsin B, reduced aphid offspring production, but only on the host plant where the expression of these genes is increased.

Thomas Mathers, Postdoctoral Scientist at the Earlham Institute, said: “Surprisingly, many of the genes involved in host adjustment arose during aphid diversification and are not specific to the green peach aphid. This suggests that it may be the ability to rapidly adjust the expression of key genes in a coordinated fashion that enables , rather than the presence of an expanded genomic toolbox of genes.”

Professor Saskia Hogenhout at the John Innes Centre, added: “Future research is expected to reveal mechanisms involved in the amazing plasticity of the green peach aphid leading to new ways to control this notorious pest. More generally, the research will help understand how some organisms are able to adjust quickly to a broad range of environmental conditions, whereas others are pickier and go extinct more easily, research that is central given our rapidly changing environment due to, for instance, climate change.”

This project was funded by the Biotechnology and Biological Sciences Research Council (BBSRC), the United States Department of Agriculture (USDA) and the National Institute for Food in Agriculture (NIFA), (USA).

1. The ability of one genotype to produce more than one phenotype when exposed to different environments - phenotypic plasticity allows an organism to change its phenotype in response to changes in the environment.

Salmonella - how the body fights back