Earlham Institute scientists have been ferreting around for signs of hybridisation between native polecats and their domesticated ancestors. The findings hint at some controversial ways we might protect and support wild polecats - and many other species at risk of extinction.

Could you tell apart a ferret from a polecat? If you’re imagining the former as a slender, albino, weasel-like creature then think again.

Domestic ferrets look almost identical to the European polecats from which they are descended. This creates complex issues of confused identities when ferrets escape and breed with their wild relatives.

So just how much interbreeding has been going on between ferrets from polecats? And is it actually a bad thing? The Earlham Institute’s Dr Graham Etherington and Becky Shaw are using their expertise in genomics to find out - and the answers offer an interesting new angle for conserving species.

“In the late 1800s and early 1900s polecats were persecuted to the point of extinction across most of the UK,” says Etherington, Senior Computational Biologist in the Institute’s Evolutionary Genomics Group.

“They ate all sorts of small animals that people wanted to eat - rabbits and pheasants for example - so, on gamekeeper sites, they'd just simply kill polecats.”

In a treacherous twist for the native European polecat, their nemesis at the time was a close relative - the domesticated ferret. In the late Victorian period, ferrets were all the rage. They were particularly handy, as is still the case now in the UK, for hunting rabbits - the very reason their cousins were being exterminated.

As polecats were disappearing, ferrets were wriggling free from captivity - with a gaping ecological niche to fill.

“Eventually, there were only a few polecats left in a small area of Wales,” says Shaw, a PhD student in the Haerty Group working with Etherington. “Thanks to protective legislation since then, the polecat population started expanding again - and they started coming into contact with populations of feral domestic ferrets spread throughout England and Scotland.

“We're really interested to see what the impact has been after, inevitably, polecats started breeding with domestic ferrets.”

The European polecat (Mustela putorius) typically features a darker coat and 'eye-mask' markings, but due to hybrid species with ferrets it is becoming increasingly difficult to tell apart from native ferrets. 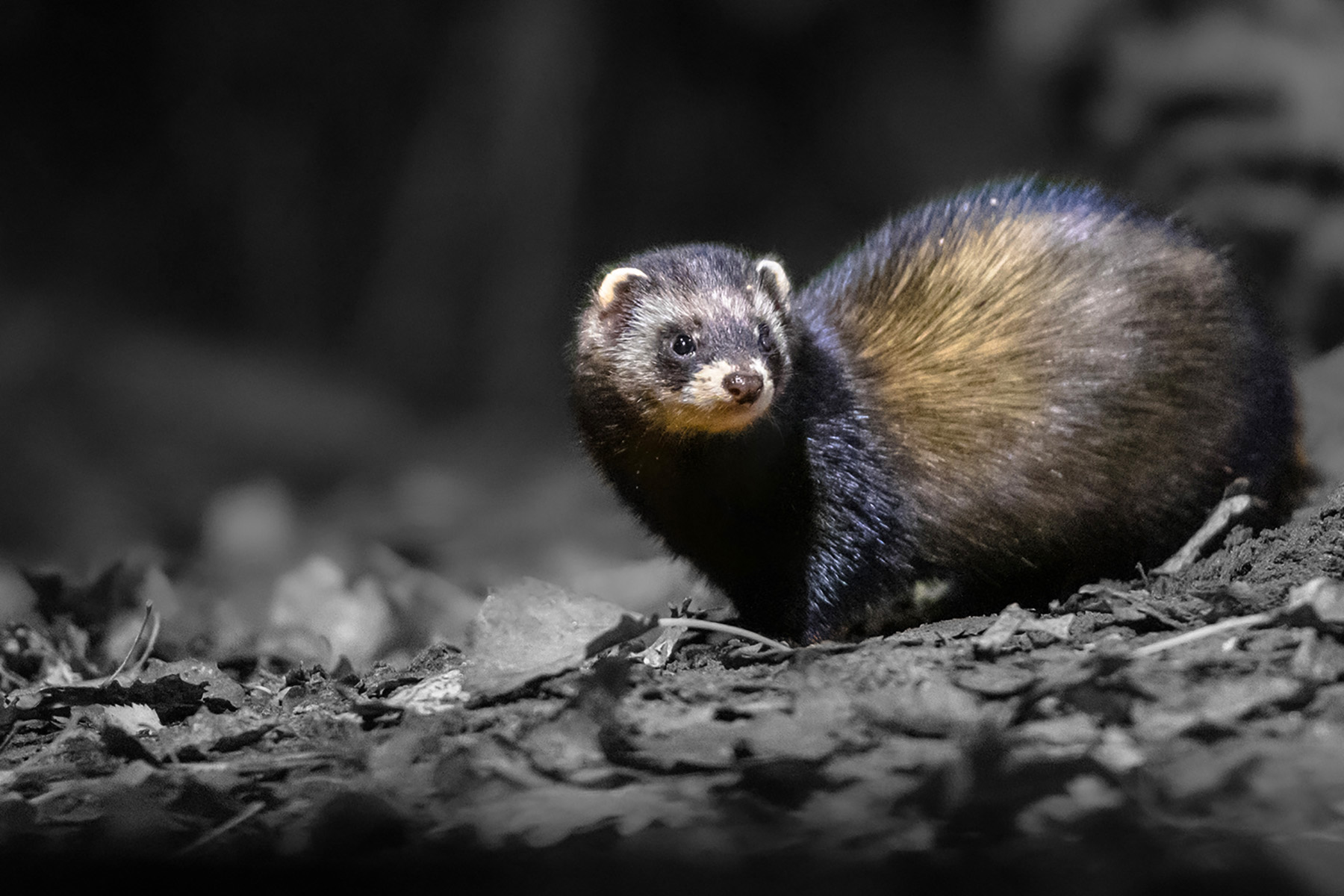 “I always say, ‘in England is there a polecat population or is it a ferret population?’” Etherington explains. A seemingly simple question but one that is difficult to answer confidently based on sightings alone.

“People think of ferrets as white, but there's the sable - or polecat-coloured ferret - which looks very much like the wild type. It's got a mask and is quite dark, just like a polecat. You'd be hard-pressed to say whether it’s a ferret, a hybrid, or even a pure polecat.”

“What we're finding is that, basically, the English polecats are fairly well introgressed - all the ones that we sequenced had quite high levels of hybridisation or genome integration with ferrets,” says Etherington, who describes a gradient of genetic purity spreading from the last bastion of European polecats in Wales out toward the extremities of England.

People think of ferrets as white, but there's the sable - or polecat-coloured ferret - which looks very much like the wild type. It's got a mask and is quite dark, just like a polecat. You'd be hard-pressed to say whether it’s a ferret, a hybrid, or even a pure polecat.

What are hybridisation and introgression?

Hybridisation refers to when two individuals of different species produce offspring with a mixed set of DNA. For example, a mule is a 50/50 mixture of a horse and a donkey and a liger is a 50/50 mixture of lion and tiger. Hybrids are relatively common in nature, particularly among plants, and certain animals including ducks.

Introgression is a longer-term process, whereby multiple generations of hybrids repeatedly breed (or ‘backcross’ in genetic terms) with one of the parent species. Rather than there being a 50/50 mixture of genes, the result can be quite complex, with only small stretches of DNA from the hybrids present in the resulting mixture. A good example might be that of modern humans and Neanderthals. At a certain point, those two species hybridised, and human DNA now contains about 2-4% ‘Neanderthal’ DNA as a result.

It seems male polecats have tended to leave their stronghold in Wales to breed with female ferrets spread throughout the UK, leading to this gradient where polecats in East Anglia are much more ferret-like at the DNA level (or ferrets are a little bit more polecat-like). That said, it’s still not clear whether there has been introgression going in the other direction.

“Even the Welsh ones are a bit weird,” says Etherington. “They sit on their own little genetic branch, separate from both European polecats and ferrets. We still don't know exactly what's going on in Wales, whether there's a bit of introgression or whether they are genetically distinct.”

That’s something that Shaw has got funding to investigate in a bit more detail.

“It's really interesting,” she explains, “and really similar to what's happening with the Scottish Wildcat in Scotland right now. We don't even know if there are any true Wildcats left because they're interbreeding with feral cats.

“We have sequenced the DNA of several Welsh polecats, which seem to be pretty pure, but we want to sample more to see if they’re a true representation of the polecat population in Wales.”

Here you can see a clearer comparison between the polecat-ferret hybrid (right) and the 'true' polecat (left), particularly with different colouration along the flanks of the polecat/ferret hybrid and also the reduction in dark colouration over the face in the hybrid. 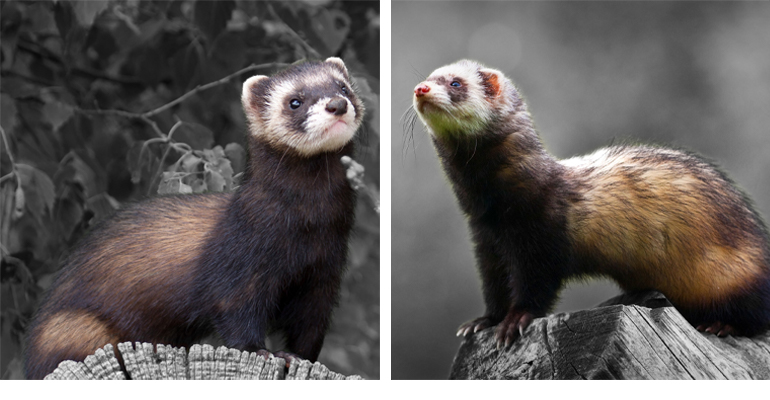 Maybe hybridisation can prove the saviour of these polecat populations - and lead to new biodiversity that we can protect. It could have implications for other species, too, such as the European mink, which is also suffering.

Now for the controversial part.

In a world in which biodiversity is declining at an alarming rate, we’re all too familiar with stories of species being saved from the brink of extinction through conservation. A lot of that involves protecting the genetic pureness, so to speak, of a species.

In many cases that can be the best approach, as we’ve recently reported how escapees from fish farms can dilute the gene pool of both farmed and wild fish - threatening their survival in environmental niches.

But what if hybrids offer some species a better chance of survival?

“You'd be hard pushed to find somewhere that European polecats are doing well,” says Etherington, lamenting the demise of polecats across Europe. “But when you look in the UK, they're doing very well.”

Could it be that hybrids between polecats and ferrets are actually doing better than their native counterparts? It’s a particularly interesting case, as essentially you have an animal that has been domesticated breeding back with its much diminished ancestor: a genetic bottleneck meeting a product of selective breeding.

“That’s something we’re looking at,” adds Shaw. “The UK polecat population is better than it’s ever been in the last hundred years or so. We're really interested to see potentially whether this hybridisation has been a tool for conserving them in the wild.”

Though far too early to say for sure (there may be other factors at play, such as conservation and restoration of the landscape), it might not come as a great surprise to learn that increased genetic diversity seemingly helps populations of European polecats that have been much reduced in number and range - and have suffered the inevitable genetic decline as a result.

Investigating the level of hybridisation and introgression of polecat's can help inform conservation efforts of other species, such as mink, or Scottish Wildcat. 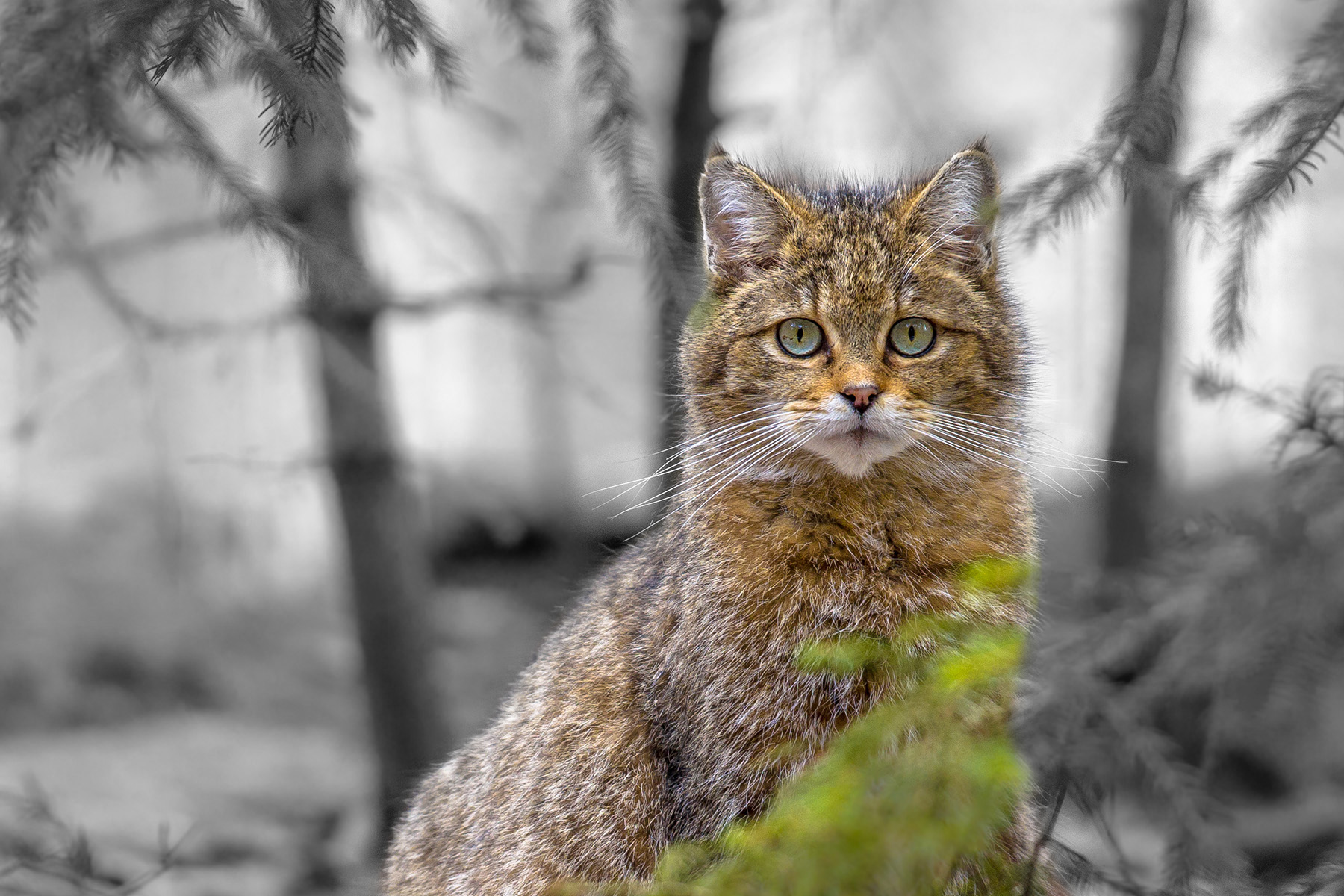 A new path to conserving species?

If this hybrid vigour of sorts does prove to be true, what would the implications be for protecting the polecat in the future?

“A lot of people think that hybridisation is bad for species and could affect their conservation, their integrity as species,” explains Shaw. “But, in fact, hybridization already happens a lot in natural populations.

“What if it could actually help populations? There's a lot of talk in the conservation world about this right now. Potentially, hybridisation is why the UK population is doing a lot better than the European populations.

“Maybe hybridisation can prove the saviour of these polecat populations - and lead to new biodiversity that we can protect. It could have implications for other species, too, such as the European mink, which is also suffering.”

Genetic rescue - where small populations of endangered species are augmented by introducing individuals from larger, better off populations - has already been used quite a lot in conservation. It is interesting to speculate whether hybrids (as has been recently attempted with white rhino embryos) could help give a similar boost to the numerous species worldwide on the brink of collapse.

Whatever the case, the research will continue in earnest to shed light on the direction and success of gene flow between polecats and ferrets, and may well have an impact on how they’re managed in the future.